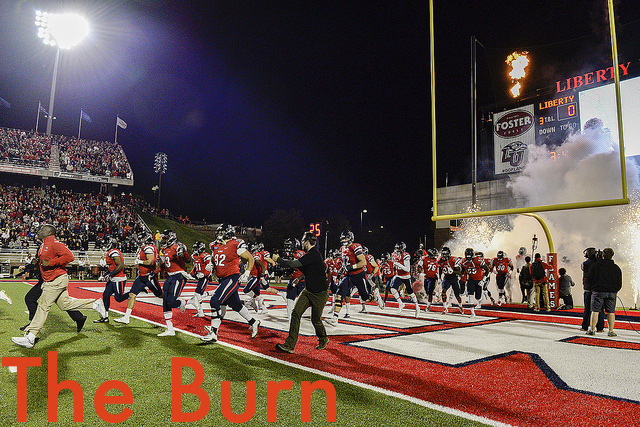 Editor’s Note: With our name change from FlameNation to A Sea of Red, we needed to change the name of our weekly FlamesNation Fuel. For those of you who have read Fuel in the past, you know it’s a weekly recap of all things happening in the world of Liberty athletics. The name we have decided upon is The Burn. Also, one of our contributors, Evan Nester, will be publishing these during football season. – Jon Manson

Here is your weekly round-up of all things Liberty:

A SEA OF RED

After numerous suggestions and careful consideration, we have decided to officially deem ourselves ‘A Sea of Red.’ A few weeks ago we announced that we were looking to rebrand a little and, considering we are a site for the people of Liberty University, we wanted you to play a role in putting this together. Thanks to all those who took the time to offer up ideas on our new name! We look forward to offering continued coverage and up-to-date information concerning everything Liberty.

The biggest news out of camp this week is that the 2nd string QB battle has come to a close. Coach Turner Gill announced Thursday that freshman QB Buckshot Calvert will serve as the back-up to starting QB Stephon Masha. Coach Gill went on to say that QB Rud Yearick, another freshman quarterback, will redshirt this season.

Apart from this, the team announced the official captains for the 2016 season: Stephon Masha, Tanner Hartman, Dexter Robbins, and Solomon McGinty.

As students return to campus this week, they have probably noticed a building beginning to take shape toward North Campus. The new indoor football practice facility has made great strides and is starting to come together. The school began work on the facility earlier this year and is expected to be completed by spring 2017. Apart from aiding the team in practice without interruption ( i.e. weather), the program hopes a facility such as this will help in the eventual goal of moving from FCS to FBS. Be sure to follow our Twitter to see videos and pictures of the progress!

FLAMES IN THE NFL

The Flames have a number of players lobbying for a place on an NFL roster right now.

WR Darrin Peterson (Chicago Bears) -Peterson has caught three passes for 21 yards in 2 preseason games. With the likes of Alshon Jeffery, Kevin White, and B.J. Daniels ahead of him, it might be difficult to make the 53 man roster. He is a practice squad candidate for sure though.

K John Lunsford (San Fransisco 49ers)-Lunsford has had the opportunity to work under 49ers K Phil Dawson for a few months now. He has seen action in 2 preseason games, where he has kicked two extra points and had kickoff duties. While it is not likely that Lunsford will be the starting kicker for the season, should he progress well, it is possible that the 49ers choose to go forward with a younger (and cheaper) option at some point.

DL Niko Davis (Kansas City Chiefs) –After a bout with the Steelers, Kansas City picked up Davis where he is now the 3rd string nose tackle.

S Jacob Hagen (Pittsburg Steelers)-In his 2nd year, Hagen looks to make the roster and bypass the practice squad. After spending time with the (then) St. Louis Rams at the start of the 2015 season, Hagen was picked up by the Steelers. There he spent the rest of the season on the practice squad. Through the first two preseason games of 2016, he has had three tackles and one pass deflected. At this point, it looks like he is on the bubble.

CB Walt Aikens (Miami Dolphins)-Walt seems to be having a successful preseason, accumulating the second most tackles on the team along with a forced fumble. He was apart of the 53-man roster the last 2 seasons and and is likely to make it a 3rd.

KEVIN FOGG IN THE CFL

After being cut by the Steelers, Kevin Fogg decided to take his talents up north to the Winnipeg Blue Bombers. Fogg is making a name for himself in the Canadian Football League, even as a rookie. On August 12th, Fogg had what most would consider a breakout game, racking up defensive stats including 2 interceptions, a fumble recovery, and a quarterback sack. Apart from this, Fogg has duties on special teams as well, returning both the kickoffs and punts.

The Lady Flames have opened the season with an 0-3 record. Liberty welcomed #4 Virginia to Lynchburg on August 19th and were unable to stop the Cavalier’s offensive attack. Apart from Virginia, the Flames have seen both Tennessee and UMBC. The most looming thing out of these three games: Offensive production. In these first three games, they have yet to score a single goal.

Women’s soccer is back in action next Friday September 2nd, in Lynchburg against Appalachian State.

The past week, Liberty released its coveted Convocation schedule and here are a few speakers that caught our attention:

Kaká-MLS star and player for the Brazil National Team