Here are our Big South Football Power Rankings which we will update each week during the season.

After 7 consecutive Division I wins to open the season, which followed an appearance in the FCS quarterfinals a season ago, Coastal Carolina has vaulted to a top 5 ranking in all major national polls. The Chanticleers have a balanced offensive attack led by quarterback Alex Ross and running back De’Angelo Henderson. Henderson leads the conference in rushing yards per game (120.7), but the Chants’ defense has been the real story. CCU is holding opponents to 16 points per game including a stretch of 3 straight games without giving up a touchdown. A big game this week for Coastal when they play host to CSU in what could be a championship elimination game.

Next: vs Charleston Southern, 3:30

The Monmouth Hawks have been one of the surprise Big South teams as they have raced out to a 5-1 record. Their only loss came against 4-2 Duquesne. Monmouth leads the league in scoring offense and ranks 13th in the country as they are putting up 39 points per game. Their offense is led primarily by their passing attack which is tops in the league. Quarterback Brandon Hill also leads the league with 285 passing yards per game. If the Hawks are going to be contenders in the league this season, they must beat the Blue Hose on the road.

It’s been a bumpy first half of the season for the Flames. With high highs (OT win over App State) and low lows (double OT loss to Richmond). Will Liberty finally get over the hump and make the FCS playoffs for the first time in school history? We’ve been asking the same question for the better part of the past decade.

It wasn’t pretty, but it was a win on the road against a top 25 FCS team. The Blue Hose have 3 Division I wins this season which is more than they had in the last 2 seasons combined. They have never won more than 3 Division I games in any one season. Presby’s 3 losses this season have come against 2 FBS opponents (Northern Illinois and NC State) and #3 Coastal Carolina. PC’s going to have their say in the conference championship race as their next two games are at home against Monmouth and Liberty, the 2nd and 3rd ranked teams in these power rankings.

Next: vs Monmouth, 2pm

What a big setback for Charleston Southern. After getting off to a nearly perfect start in their first 6 games of the season, and vaulting into all of the national FCS top 25 polls, the Buccaneers laid an egg at home to Presbyterian. This loss puts a damper on the big showdown in Conway on Saturday with Coastal Carolina. Can CSU rebound? With road games to CCU, Monmouth, and Liberty all on the schedule, it looks like the Bucs will be out of the Big South championship and auto-bid race before it even begins.

The Runnin’ Bulldogs narrowly escaped the Big South’s worst loss this season as they got out of Lexington with a 47-41 win in double overtime. Lucas Beatty threw for 430 yards and 5 touchdowns while Kenny Cook had 12 receptions for 251 yards and 2 touchdowns. GWU led 31-13 into the 4th quarter before VMI scored 21 straight points to take a 34-31 lead with just 4 minutes left in the game. Paul Schumacher’s 43 yard field goal in the waning seconds for Gardner-Webb sent the game into overtime. 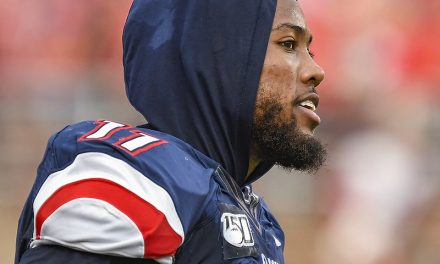