The early signing period for basketball begins today and runs through November 20th. The Flames have 5 verbal commits early from Braxton Bonds, Stavian Allen, AC Reid, Ezra Talbert, and Evan Maxwell. Liberty has at least 6 scholarships to fill as they look to replace seniors Davon Marshall, John Caleb Sanders, Casey Roberts, Antwan Burrus, JR Coronado, and Joel Vander Pol. In addition to the 6 seniors, there are 4 juniors on Liberty’s roster as well. To say the Flames have a lot to replace in the next year or two, is quite the understatement.

Just by numbers alone, this will be a very important class for the Flames. With the 5 verbals, Coach Layer and staff are off to a very good start. Don’t be alarmed if only 1 or 2 NLI’s roll in today, as this is a week-long signing period. Each recruit could be having special signing ceremonies at their school later in the week. Of course, we will be sure to update you when each recruit has signed.

Reid signed with the Flames over offers from Hampton, Sam Houston State, the Citadel and Texas State. Last season, he averaged 16 points and 2.5 assists per game. He visited campus in September; both of his parents played college basketball. Reid is a shooter with solid 3-point range.

Allen is extremely athletic; he may be the most athletic Flame since Gabe Martin. Don’t believe me, then check out his highlight tape. He is a stretch 4, but could also see some time at the 3 during his career especially if he develops his jump shot. Stavian loves to attack the rim, and FlamesNation should expect plenty of rim-rattling dunks during his time on the Mountain. Allen committed on August 24th. He picked the Flames over Abilene Christian and Campbell. Liberty was the first to offer him back in May, and he took a visit to Lynchburg in June.

Talbert is the highest rated recruit of the class as he is rated a 3 star prospect by Scout. Both Rivals and ESPN rate Talbert as a 2 star prospect while ESPN gives him an individual rating of 69. Ezra signs with the Flames over offers from Creighton, North Dakota, South Dakota State, Drake, Missouri-Kansas City, and Montana State. He originally committed to play for Creighton in the Summer of 2012, but after taking a visit to Liberty in August he switched his pledge to the Flames. As a junior last season, Talbert averaged 13.5 points and 6.6 rebounds per game while shooting 59% from the field. He has been described as “an unbelievable athlete, who attacks the rim with force. Despite his power game, his most impressive quality is his pull up jumper. At 6’7″ he can get his shot off on any defender.”

Braxton signed with Liberty over offers from LSU, Miami (OH), Middle Tennessee State, Radford and Boston University. He is a true point guard, and describes himself as wanting to be “the most unselfish player on the court because that is my job.”  He continued by saying, “I can get to the basket and get creative with my finishes. On defense, I want to get a hand or foot on every ball, every possession.” Bonds opened his season Thursday night with 18 points and 12 assists. He is the nephew of former MLB slugger Barry Bonds.

Maxwell gives the Flames a post presence in this class they will sorely need in the years to come with the graduation of Burrus, Vander Pol, and Coronado. He chose Liberty over Monmouth. According to MaxPreps, Evan averaged 3.2 points and 2.0 rebounds per game as a junior. He will be counted on for more production during his senior season. This video is from his sophomore high school season: 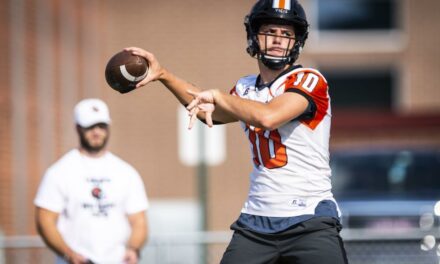