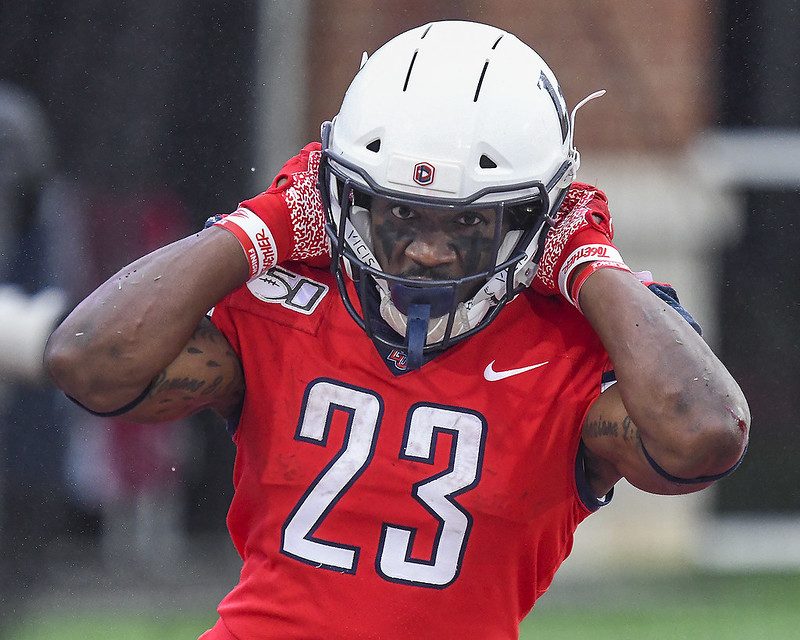 With thousands of football players to suit up for the Flames over the years, just making this list is a huge honor, but who will be in the coveted top spot? Our list begins with Nos. 50 through 41.

Check back Tuesday for 40-31 as we unveil the entire top 50 this week.

Johnson was a 4-year starter at quarterback, seeing the program from a 1-9 record his freshman season as the program recovered from the Treasure Island flood under head coach Morgan Hout. His final two seasons, Johnson helped lead the Flames to 15 wins as Sam Rutigliano took over his senior season.

McFadden excelled on the football field at Liberty, playing just two seasons while also running track for the Flames. In 1995, he turned two kickoffs and two punts for touchdowns and averaged a school record 37.8 yards per kick return. His 93-yard punt return against Delaware State that same season is still a school record. At season’s end, he was named a first-team All-American as a return specialist by both the Football Gazette and the Sports Network and also named to the VaSID all-state first team.

In 1996, he led the team in receiving with 452 yards while also continuing to be a big factor in the return game. His 1,446 all-purpose yards in 96 ranks 5th all-time for most all-purpose yardage in a single season.

McFadden participated in the Indianapolis Colts’ 1998 preseason training camp, but was released just before the team’s last cut. He then spent the 1999 season with the Portland Forest Dragons of the Arena Football League.

Following Rashad Jenning’s 3 year reign as Liberty’s running back from 2006-08, Allen immediately came in and stepped into his role. Allen led the team in rushing in 3 out of 4 years while scoring 21 touchdowns in 2011 and 2012.

Hogans was one of Liberty’s first standout offensive linemen as he ruled the trenches as Liberty moved to the NCAA’s Division II level. He was named a first-team All-American following his senior season.

It’s hard for a long snapper to make any lists like these, but Wright is an exception. He was twice named a first-team All-American and named first-team All-Big South three consecutive seasons.

Banks was inducted into the Liberty Athletics Hall of Fame in 2011 after a standout for 3 seasons on the gridiron for the Flames. In 1984, he was named an honorable mention All-American and first-team all-state as he finished with 77 receptions for 1,029 yards. His 77 receptions that season still rank 4th most in school history for a single year.

The 1984 season was the only year that Kelvin Edwards didn’t lead the team in receiving during his 4 year career as Banks was the team’s top target.

He finished his career by ranking No. 2 nationally among all NCAA Division II players in receiving yards in 1984. He became Liberty’s first ever NFL Draft pick, being selected in the 8th round of the 1985 draft. He played eight years in the NFL with the Browns, Chicago Bears, and Miami Dolphins and amassed 105 receptions for 1,636 yards and 10 touchdowns in his 80 game NFL career.

Playing under the microscope of two of the best to every put on the Liberty red, white, and blue in Buckshot Calvert and Antonio Gandy-Golden, Hickson never got the attention or fanfare he deserved.

He began his career as the Flames’ top kick returner, running one back for a touchdown against Kennesaw State in 2016 as a redshirt-freshman. The 99 yard kick return for score is the longest in school history. For his exploits as a returner, Hickson was named 2nd team all-Big South in both 2016 and 2017 while also being named VaSID all-state 2nd team as a return specialist in 2016.

After injuries allowed him to move up the running back depth chart in 2018, Hickson proved his worth there, as well. He rushed for 1,000 yards in each of Liberty’s first two years as an FBS member, and he finished his career 4th on the program’s career rushing list while also claiming first in career all-purpose yardage.

Chiles was one of the top high school prospects in the country in 1991 as a linebacker, but he wanted to play quarterback. The high school All-American ended up with Florida to begin his career, choosing the Gators over the likes of Notre Dame, Nebraska, Miami, and Tennessee.

After redshirting as a true freshman and spending one season as the backup, Chiles decided to transfer and ended up in Lynchburg. After winning the starting quarterback job, Chiles became Liberty’s starter for all three seasons. He had five 300 yard passing games and 10 where he threw for over 250, the 5th most in school history.

As a senior, Chiles led Liberty to an 8-3 season including a win over No. 19 UCF in Orlando.

Smith was a 2010 inductee in the Liberty Athletics Hall of Fame and was one of the school’s first all-star athletes. He was the football program’s first scholarship student-athlete and score the team’s first ever touchdown in 1973. If he had played his entire career against varsity programs, he would rank in the top 4 of Liberty’s annals in career rushing yards, career rushing attempts, career rushing touchdowns, career 100-yard games, career scoring, and consecutive 100-yard games.

Many of you were outraged (and understandably so) when Nobles was not included on our list of Liberty’s 5 best running backs of all-time, and your voice has been heard as he’s made his way onto this countdown.

Nobles ranks 2nd all-time on Liberty’s career rushing list with 3,711 yards. He led the team in rushing from 1997-99, going over 1,000 yards in 1998 and 1999. Nobles scored 25 touchdowns in his final two seasons, leading the team in scoring both years, and he ranks 3rd all-time among scoring leaders excluding kickers.

Nobles is also the school’s all-time leader in rushing attempts and ranks 2nd in rushing touchdowns and 3rd in all-purpose yards. He was named an honorable mention All-American three consecutive seasons and made the NCAA I-AA All-Independent first team in 1998. 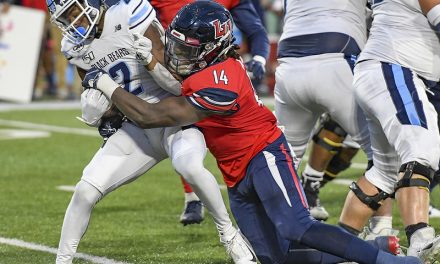 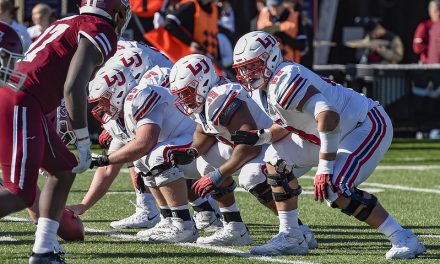