Our Q&A this week is with Army beat writer Sal Interdonato of the Times Herald-Record.

ASOR: The Black Knights have to replace quarterback Ahmad Brandshaw who rushed for over 1,700 yards in 2017. With Army’s offense, how important is the quarterback position and will production drop in Bradshaw’s absence?

Sal Interdonato: Ahmad Bradshaw’s 1,746 rushing yards were the most by any service-academy player in a single season and are nearly impossible to duplicate. The quarterback position is vital in Army’s option offense. The quarterback reads the defense on option plays and gets the football to the right runner. Kelvin Hopkins is certainly capable of handling all of the responsibilities of an option quarterback and he gives Army a passing dimension that it did not have last season.

ASOR: It’s been several decades since Army has won bowl games in back-to-back seasons like they’ve done in 2017 & 18. What are some of the factors that have led to Jeff Monken’s recent success?

SI: Monken has changed the culture at West Point. Army has won many games in the final moments over the last two years because players believe they were the mentally, tougher team. Having one of the nation’s top rushing attacks and being one of the top teams in fewest turnovers and time of possession didn’t hurt either.

ASOR: Does Army have any intentions on joining a football conference any time soon or are they content being an Independent?

SI: Army has no intentions on joining a conference to my knowledge. The academy is content on being independent. Army fancies itself as “America’s Team” and an independent schedule allows Army to schedule games in Texas and California, two recruiting hotbeds. There’s no shortage of high-profile games in the future with the likes of Michigan, Wisconsin, Tennessee, and LSU on the schedule.

ASOR: Many Liberty fans are looking forward to visiting West Point and Michie Stadium, what are the “can’t miss” aspects of the festivities on an Army football Saturday?

SI: Fans may want to get to West Point three hours before kickoff for the cadet review on The Plain, a full-dress cadet parade. About 20 minutes before kickoff, a regiment of 1,000 cadets marches onto the field. Weather permitting, a parachute demonstration where cadets jump out of a helicopter and land on the field with the game ball is a can’t miss.

ASOR: We all know about the Army offense, but who are some players we should keep an eye out for on the defensive side of the ball?

SI: Junior cornerback Elijah Riley and junior safety Jaylon McClinton are playmakers in Army’s secondary and will need to step up against Liberty’s vaunted passing attack. Senior linebacker/safety James Gibson also has a knack for making timely plays in the pass rush or run defense.

Thank you Sal for joining us. Liberty fans, be sure to give him a follow on twitter @salinterdonato and read his coverage of the game.

What to watch: Coastal Carolina 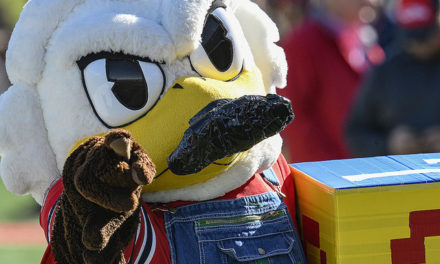