The Flames will try to rebound from consecutive losses as they take on one of the worst teams in all of Division I in Presbyterian. Find all you need to know about the Blue Hose in our Presbyterian Primer.

1. Team introduction. Presbyterian is one of the worst teams in all of Division I basketball, and they have been pretty much since they transitioned from Division II beginning in 2007. Their average final RPI over that time period is 288 including their dead last 351 rating currently. Presbyterian is 61-141 since 2007 and 30-63 in Big South play. The Blue Hose are 4-6 against Liberty during this time including their win over the Flames 68-60 in the teams’ only meeting a season ago. Gregg Nibert is in his 25th season as head coach of the Blue Hose who are 4-16 this season and the last remaining winless Big South team in conference play at 0-5.

2. Offense. Presby ranks last in the Big South in scoring offense as they are scoring just 64.5 points per game which puts them 319th in the country. The Blue Hose are shooting 43.9% from the field and 36.7% from 3-point range. Jordan Downing leads the team in scoring and is 3rd in the Big South at 18.6 points per game and scored 37 points on December 3rd against UNC Greensboro.

3. Defense. The Blue Hose are giving up 75 points per game which is 9th in the conference while allowing their opponents to shoot 47% from the field. Presby is also one of the worst rebounding teams in the conference as they get outrebounded by 7.7 boards per game.

4. Player turnover. Coach Nibert had to replace 3 of his top 4 scorers from a season ago in Khalid Mutakabbir, Joshua Clyburn, and Eric Washington. That trio combined for 34 points, 12 rebounds, and 3 assists per game a season ago. Clyburn transferred to Queens College while Washington transferred to Miami Ohio.

5. Possible starters. A look at the likely starting line-up for the Blue Hose…

Jordan Downing is 3rd in the Big South in scoring

Guard: Jordan Downing (#21) – 6’5″ 208 pound R-Junior – as mentioned above leads the team and is 3rd in the Big South in scoring at is averaging 18.6 points per game. He also averages 4.5 rebounds per game. Downing is one of the better 3-point shooters in the league as he has 50 made 3-pointers while shooting nearly 40%. He scored 28 points on 6 made 3-pointers against Coastal.

7. Prediction. If Liberty can’t win this one, they will have a hard time finding many more wins on the schedule. Liberty 73 Presbyterian 66 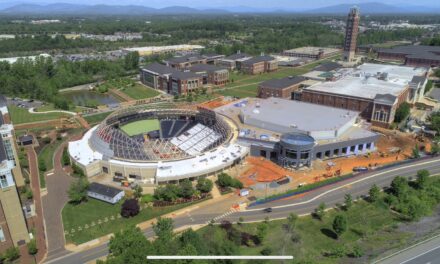 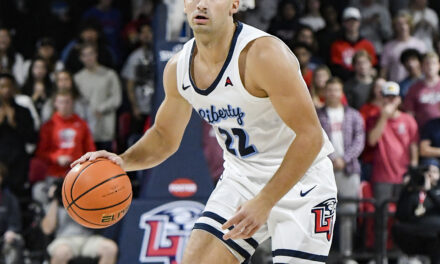 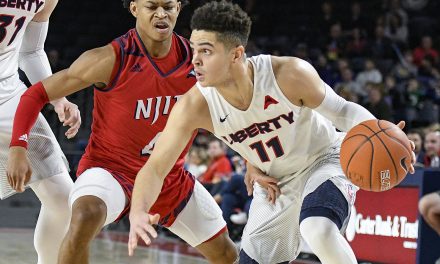