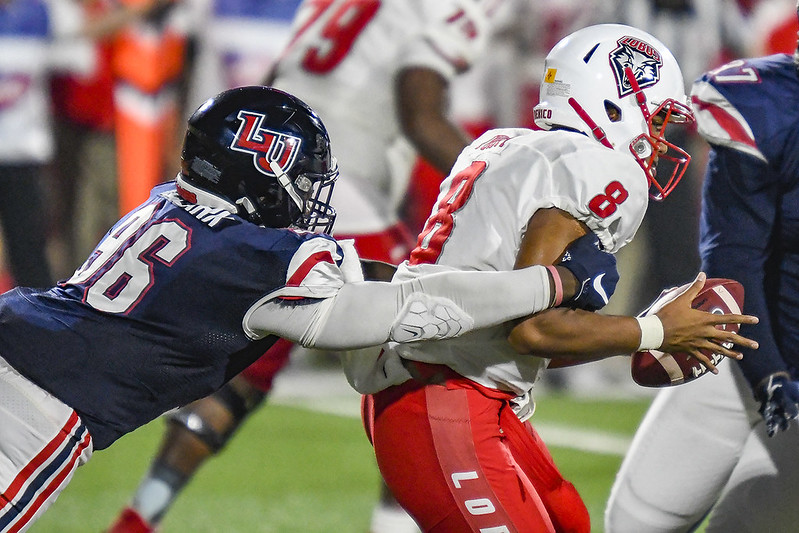 Through the first half of the season, Liberty head coach Hugh Freeze has had to rely on true freshmen frequently, particularly on defense. With the new redshirt rule now in its 2nd year in existence, players can compete in up to 4 games in a season and still maintain their redshirt.

Five true freshmen have already burned their redshirt year having played in at least 5 of the team’s first 6 games. WR/KR Shedro Louis, CB Kei’Trel Clark, DE TreShaun Clark, and DB Chris Megginson have played in all 6 games while S Micah Glaize has seen action in 5 games.

Louis has emerged as the team’s primary kick returner and has shown his ability. He’s averaging 20.9 yards per return on his 11 kick returns with a long of 45. He also had one returned for a touchdown against Hampton that was called back. He actually had a punt return for a touchdown in that game called back as well. Louis has also seen some spot duty on offense as a wide receiver, catching 3 passes for 18 yards and losing 5 yards on his lone carry.

Kei’Trel Clark has been one of the pleasant surprises early in the season, becoming a key member of the Flames’ cornerbacks and starting in the last 3 games. He has 17 tackles and leads the team with 3 pass breakups.

Have you noticed that we have two Tre Clark’s making impacts as true freshmen on the defense? We’ll have to come up with a nickname for them or something. TreShaun, the defensive end, has 16 tackles, 5 TFLs, and 3 sacks. He has been pushing for starter’s reps in recent weeks as he continues to push for more and more playing time.

Megginson began his career as a corner then was switched to safety, a spot he stayed in through training camp and into the first couple weeks of the season. With the Flames suffering some injuries at corner, he has moved back there and continues to see increased playing time. Megginson has 10 tackles and 2 pass breakups.

Glaize has become a key reserve at safety, recording 2 tackles and 1 pass breakup.

DB Tayvion Land and DE Brayden Monday have played in exactly 4 games thus far, and are both likely to exceed the limit and will burn their redshirt this season.

Liberty’s first ever 4-star recruit, Tank Land has played in 4 straight games after sitting out the first 2. He’s even gotten 2 starts as he’s settled into the nickel/safety spot on the defense. Land has 13 tackles and a very important fumble recovery as he fell on the ball on New Mexico State’s final drive that sealed the Liberty win last week.

Monday has missed 2 games with an injury, but he has 8 tackles and continues to make an impact on the defensive line.

We all know Bennett’s story as he got playing time in 2 games before getting injured against Hampton while celebrating fellow quarterback Brandon Robinson’s first career touchdown. Bennett will redshirt as he’s out the rest of the season with a ruptured patella tendon. The Flames are hopeful Bennett is ready to go when spring practice rolls around.

Caper has played in two games and recorded 1 tackle. Unless Liberty suffers some injuries at linebacker, the staff will likely try to preserve his redshirt.

Douglas caught one pass for four yards in his lone action. Similar to Caper, he will likely redshirt unless there are injuries at receiver.

NO GAME ACTION YET 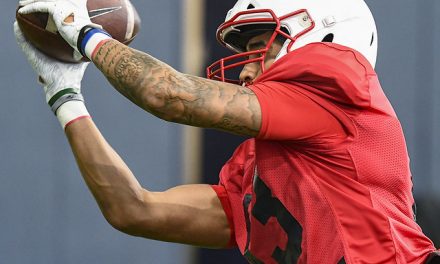