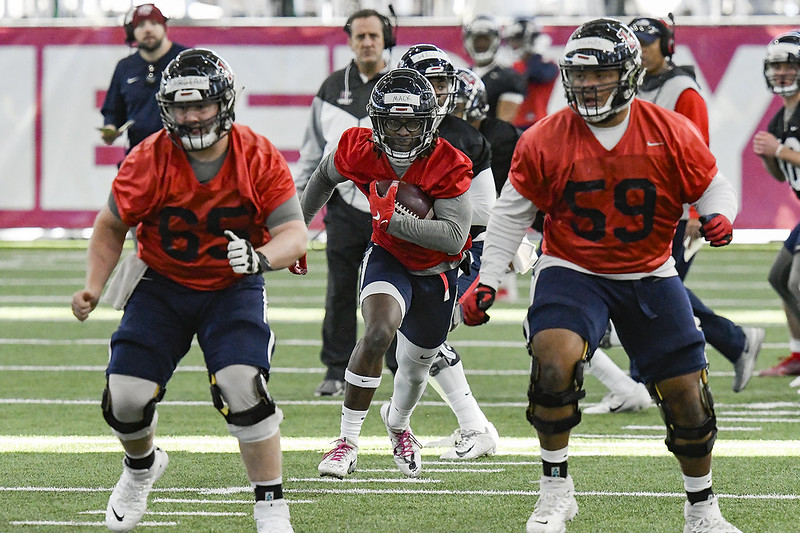 Despite Hugh Freeze naming Malik Willis the starting quarterback earlier this week, it sounds like the battle will continue into the early part of the season. Freeze has not been shy to mention that he won’t hesitate to insert Chris Ferguson or Johnathan Bennett into the game if the  offense is struggling.

“Coach Freeze said it (Monday), competition is still there every day,” Ferguson said earlier this week. “Every day in practice is a chance for me to show what I can do, show that I can handle the offense and further their confidence in me, as well.”

Everyone is hopeful that Malik will hit the ground running (literally) and the offense won’t look back, but Freeze has some options should the offense need a jump start.

With the quarterback battle, one position battle which flew under the radar a little bit was at kicker where the Flames are looking to replace Alex Probert who elected to transfer to Iowa State. Earlier this week, Liberty head coach Hugh Freeze named Alex Barbir as the starter this weekend at Western Kentucky.

“Barbir is going to get the start, and he’s actually performed very well over the last week and a half,” Freeze said. “Our confidence has grown in that regard toward our field goals and extra points.

Earlier during camp, Freeze said he was very concerned about the Flames’ kicking situation and if things didn’t get cleared up, Liberty might be going for it on 4th down more times than not.

Barbir as a very unique story as he was rated as one of the top kickers in the class of 2016 coming out of high school when he signed with Penn State. He redshirted in 2016 and saw playing time in 3 games in 2017 as a kickoff specialist.

In December 2017, he decided to transfer from Penn State and enrolled at Liberty where he has been a student since but not part of the football program. That all changed in the spring when Probert transferred and the Liberty coaching staff reached out to Barbir.

Freeze says, depending on the conditions, he is comfortable with Barbir on field goals 45 yards and in.

“He’s had a really good two weeks. I’m excited to see what he does when it goes live, but I’m really pleased with him to this point.”

Like every training camp, the Flames have several bumps and bruises, but it sounds like most of the team will be ready to go.

Safety Tim Kidd-Glass is out while CB Isaiah Avery is day to day. WR Noah Frith is questionable, but the rest of the receivers who have been dinged up will play including DJ Stubbs and CJ Yarbrough.

“(Jenkins) had surgery on his leg and, unfortunately, think he will be out for at least most of the season if not all of it. (For Hobbs), it’s just rehab. I don’t think surgery is required there. So, he’s kind of week to week.”

Tackling & conditioning a concern for Freeze

With a very unorthodox offseason and training camp, Freeze says he’s concerned about the team’s tackling and conditioning entering the season opener.

“I’m really concerned,” Freeze said earlier this week. “Are we really prepared, physically, to play an 80-play game on both sides of the ball? I still don’t know the answer to that.”

Freeze usually limits tackling during training camp but focuses on it more during spring practice when players would have much more time to recover from any resulting injuries. With Liberty’s spring practice cut short from its normal 15 practices to just 5 due to the COVID-19 pandemic, those tackling drills did not take place.

“You’re really concerned,” Freeze said when discussing the team’s tackling. “How will we tackle, particularly against guys that they have at quarterback, running back, and receiver? They’re very, very talented and athletic there. I’m very concerned with how will we tackle.”