Liberty goes on the road tonight in its first Division 1 game of the season against William & Mary.  The Flames are coming off an opening night win against Randolph, while the Tribe dropped their opener against Hampton by a score of  77-69.  Liberty has lost its last two games against W&M, both at home in the Vines Center.  The Flames lead the all-time series 4-3.

1. Introduction.  William and Mary comes into the season returning their top four scorers from last season.  The Tribe finished last year with a record of 13-17, but finished the year the best shooting team in the CAA.  The experienced W&M team features a Princeton-style offense, and a disciplined defense.  The Tribe have the experience and talent to compete in a depleted CAA this season. The Tribe are now in their 11th season under Head Coach Tony Shaver.

2. Offense. W&M will feature Junior Guard Marcus Thornton on offense, who was named to Jay Bilas’ Top Players Outside The Power Conferences list.  Thornton can shoot the 3, as well as penetrate and create for his teammates.  He averaged 18.8 PPG last season, and scored 21 in the Tribe’s opener against Hampton.  Senior Guard Brandon Britt, who averaged 13.9 PPG last season, has been suspended indefinitely.  His status for tonight is not presently known, but we don’t expect to see him on the floor against the Flames.

4. Player Turnover.  The Tribe didn’t lose much by way of turnover going into 2013-14.  The only consistent starter lost was Matt Rum, the 6’4″ Guard who contributed a little more than 5 PPG.  W&M should easily be able to replace his production with returning letter winners and newcomers.

5. Possible Starters. A look at the likely staring line-up for William & Mary…

Point Guard: Marcus Thornton (#3), a 6’4″ 185 pound Junior that leads the team in scoring.  He is one of the best 3-point shooters at this level, and will challenge the Flames’ guards all game.

Shooting Guard: Julian Boatner (#2), a 6’2″ 185 pound Senior will likely get the start in place of the currently suspended Brandon Britt.  Boatner has been a situational player for the Tribe, but possesses excellent accuracy from behind the arc.

Wing: Terry Tarpey (#25) is a 6’5″ 200 pound Sophomore steps into a bigger role this season for the Tribe.  He averaged more than 14 minutes a game last season off the bench.

Forward: Tim Rusthoven (#22) comes in at 6’9″, 235 pounds, and was the Tribe’s top big man last season.  He put up five double-doubles last season, and is a key contributor on both ends of the floor.

Forward: Kyle Gaillard (#23), a 6’8″ 220 pound R-Senior returns for his final season for W&M.  Another starter from last season, Gaillard will bring even more veteran leadership to an experienced squad.

6. Prediction. Liberty has played very competitively against their cross state foe from Williamsburg.  While the Flames lead the series 4-3, they have lost the last two, including losing a big lead against the Tribe last season.  W&M comes in with a lot of experience, and this game will be the home opener, so the Tribe should have plenty of energy tonight.  Even with two key players out, W&M is a tough test for the Flames.  This game is winnable, but Liberty will have to shoot the ball well and keep Thornton from going to town behind the arc.  A still rusty J.C. Sanders makes things even more difficult as the Flames will be in the process of building chemistry.  William and Mary 76 Liberty 70. 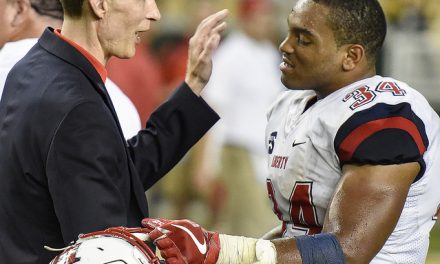 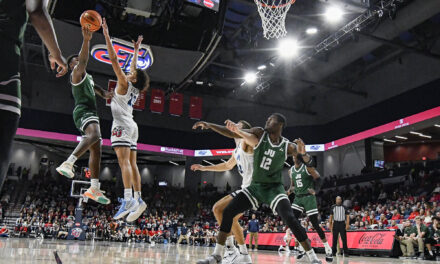