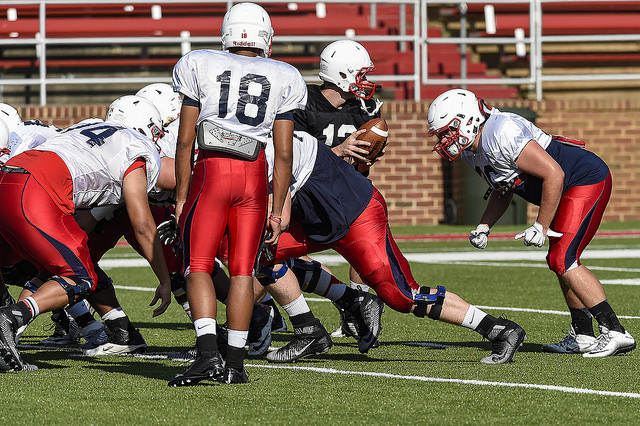 The Liberty football team has completed 5 full practices including their first in full pads on Friday morning. They will have a total of 18 practices during training camp this month before the Flames begin Virginia Tech week preparation on August 29th. We spoke to a few players and head coach Turner Gill after practice today. Here are a few notes and quotes from that session.

It was the first day in full pads, and it was extremely hot on the field.

Being down on the field after practice for just a few minutes it was extremely hot. Additionally, it was the first day the team was in full pads. Practice was cut short by about 20 minutes today due to the heat and the fact that it was the 5th consecutive day of practice. Juwan Wells and Stephon Masha, both Georgia natives, were joking that it felt like Georgia weather.

“It’s hot, but we have to get through it,” offensive lineman and captain Tanner Hartman said. “Our first game against Virginia Tech is a noon kickoff, so it’s going to be hot then. It’s just something you have to put in the back of your head and just get through it.”

Being the first day in full pads it was the first time the team got into some short yardage and goal line situations. Coach Gill said that the offense won that battle today.

The true freshman kicker from Andover, Minnesota will try to replace John Lunsford. As we all know, Lunsford is currently in camp with the San Fransisco 49ers fighting for a roster spot. Probert was named Lunsford’s replacement as starting kicker before he even arrived on campus following the conclusion of spring practice.

“If you want 1 or 2 people that has been pretty good in the first 5 practices, I think (Probert’s) right up there, no question about it,” remarked Gill. “He’s been striking the ball pretty well. He’s been pretty consistent on hitting the ball. He doesn’t quite have as strong a leg as John but he’s not far off. He can hit the 50+ field goals if need be. I think anywhere inside of 50 I think you’re going to see tremendous accuracy. This is still practice, he hasn’t been in the fire yet. But I’m very pleased the way he has progressed so far.”

Lunsford had such a strong leg and was quite the weapon for the Flames on kickoffs. Opposing teams didn’t even need to attempt to return his kicks as they all ended up out of the back of the end zone. It sounds like with Probert the Flames will have a little bit of a different strategy on kickoffs.

“He can kick it out of the end zone, if need be. If there’s just a mild wind he can do that,” Gill explained. “The other asset that he has is he has good height (on his kicks), probably a little bit more accuracy in placement of where you want the ball.”

The other true freshman that has impressed early is Brandon Tillmon.

Tillmon is expected to play both football and baseball at Liberty. The 6’1″, 210 pound athlete will play defensive back for the Flames and could end up at the spur spot. Tillmon’s name was the first one Gill thought of when asked about other true freshmen that have impressed so far. He also mentioned receivers Lionell McConnell and Antonio Gandy-Golden.

Tanner Hartman grew up a Virginia Tech fan and will face the Hokies at Lane Stadium in just 3 weeks.

Hartman is a redshirt-junior and team captain from LCA. He spent one season at Penn State before transferring to Liberty prior to the 2014 season. His dad played at Virginia Tech and he grew up a big Hokie fan.

“We had season tickets for many years. I grew up going to all those games, went to practices when I was little. I know some of the older coaches and met them through my dad.”

There will be several familiar faces for Hartman on the other side of the field on September 3rd including Brenden Motley, Johnathan Galante, and Braxton Pfaff.

Gill loves the energy the guys have shown so far.

“I love the energy, I love the focus. Our coaches are continuing to be energized. Our players have been energized.” Gill continued, “They’re still upbeat and ready to get better. We’re staying focused and that’s the thing I like so far. The big thing will be here in the next week, when we come back, are they still able to maintain that. The first week is usually pretty good for the most part. That 2nd and 3rd week is where you have to really challenge to make sure our players stay in tune and in focus.”

The D-Line looks fast and athletic, “doing what they do.”

After a solid true freshman campaign, Juwan Wells will be counted on to be a big contributor this season. He was voted as a team captain and will look to step in to Chima Uzowihe’s role on the defensive line.

Wells said the defensive line is “looking very fast, very athletic. Just running around making plays, doing what the d-line does every year.” He says Javon Frazier will be someone that is a dominant pass rusher and could make an impact this season.

Frazier is a redshirt-freshman from Stafford, Virginia. He will be fighting for playing time at defensive end behind Wells.

Coach Gill did not specifically mention any names when discussing injuries. He said they are just taking it cautious on a handful of guys that could play if it was game week. It doesn’t sound like there’s anything serious that anyone is dealing with at this point.

The Flames were originally scheduled to have their one off campus practice during camp this Saturday, but it has been switched to next weekend.

Camp life rolls on. As Juwan Wells said, “We’re just trying to compete and make each other better every day.” The Flames will have another practice on Saturday which will feature some live plays. Most of the team gets Sunday off as there’s a “Special Teams Walk Thru.” Week 2 of camp begins Monday morning. 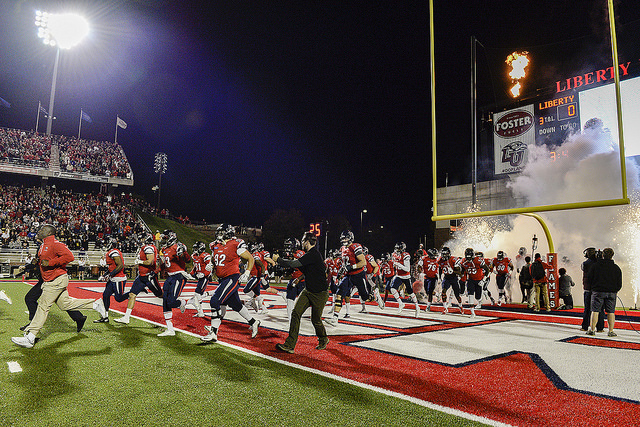