Stadium Journey put together a list of more than 200 college baseball stadiums ranking them from the best to the worst. The Flames’ brand new Liberty Baseball Stadium checks in at #5 on the list! Liberty is ahead of numerous household names such as Florida State, Texas, Clemson, Nebraska, LSU, and many more.

Pilots’ Alex Close excelling after draft disappointment writes David Teel of the Daily Press. Close explains he was hoping to sign a professional contract this summer, but the Kansas City Royals (who drafted him in the 27th round) informed him they had too much money invested in other low-minors catchers.

The Big South has signed a TV deal with Sinclair Broadcast Group. No details yet as to if any Liberty games will be carried on the network or where the games will show up. 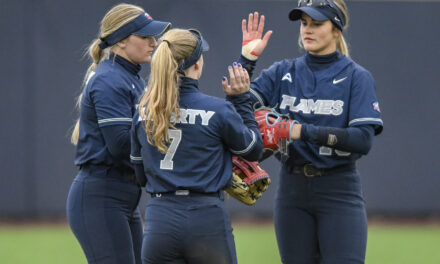