Liberty 2021 commit Joseph Venzant and his AAU team, Texas Hardwork, hosted scrimmages in San Antonio this week, and by all accounts Venzant shined.

We caught up with Brandon Jenkins, who runs a Texas based scouting service and was live on hand to watch the games, to get his thoughts on Liberty’s commit.

“He’s your guy,” Jenkins said. “He’s athletic in the open floor, strong right hand driver, he does the kind of winning things that will help you win another conference regular season title in the Atlantic Sun.”

Jenkins has watched Venzant play since he was entering his freshman season at Midland Christian.

“He knows what to expect when he gets to (the Division I level) because he played against Division I caliber dudes for the better part of his high school and middle school career,” Jenkins said of Venzant. “It won’t be a problem. I think all the toughness, defensive attributes, athleticism in the open floor, it all translates.”

The 6’3″, 185 pound wing is a consensus 3-star rated prospect with offers from UTSA, UTEP, Wake Forest, Tulsa, and Cal State Fullerton. He took an official visit to Liberty last September and committed in December. Rivals ranks Venzant as the No. 43 shooting guard in the class of 2021.

Venzant helped lead Midland Christian to a Final Four appearance in the state tournament before falling to the eventual TAPPS 6A State Champs John Paul II. He averaged 21 points, 6.3 rebounds, and 3.2 assists per game this past season as a junior as he was named MVP of District I for the third consecutive season. He was also named first-team all-state TAPPS 6A for a second consecutive season and named to the TAPPS Final Four all-tournament team.

Midland Christian finished the season with a 31-5 overall record and was ranked at times in the top 20 of all teams in Texas regardless of classification. Venzant had 32 points, 10 rebounds, and 4 steals in the Final Four loss to John Paul II, who was the top private school team in Texas and No. 7 among all Texas teams.

“I think that school is a perfect fit for him,” Jenkins said of Liberty and Venzant. “I felt like if he would have went any higher, he wouldn’t have been able to maximize his potential.”

Jenkins says Venzant ranks as a top 15 player in the 2021 class out of Texas, and about 10 of the prospects ahead of him will end up going to Power 5 schools. He thinks Venzant can be an immediate defensive standout for the Flames.

“The best part about him is he has active, quick hands to where he is good at poking balls loose,” he said of Venzant. “He also reads the passing lanes really well. His awareness defensively is top notch, that’s what I think stands him apart. He loves to rebound, he loves getting every 50/50 ball, he’s going to be one of those dudes who is the heart and soul of a team with his toughness. That’s why I think he will be very impactful at Liberty.”

The biggest thing for Venzant to work on is his shooting, according to Jenkins.

Venzant is part of an early 2021 class that includes Brody Peebles. Venzant and Peebles can sign with Liberty as early as November. For Texas5starz, Jenkins had this write-up on Venzant following the week’s event:

“Liberty won the Atlantic Sun Conference regular-season title this past year. With the addition of Joseph Venzant, it is likely their success will carry on in the 2021-22 season. Venzant was arguably the most impressive player in the gym from a hustle and defensive standpoint. The athletic swingman was the recipient of all fifty-fifty balls and utilized his length, athleticism, and awareness to force turnovers on the defensive end.

Although he struggled to connect on shot attempts from the perimeter, he made up for it in transition and opportunistic buckets. The Midland native will be a perfect fit in the Flames system because he provides multiple ingredients for a winning recipe.” 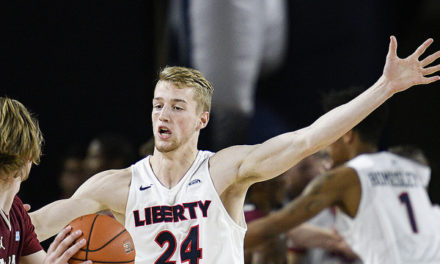