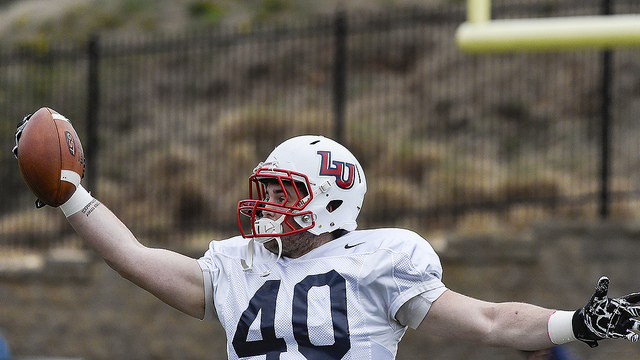 With Carrington Mosley and Todd Macon exhausting their eligibility and moving on, there will be some new names at running back for the Flames in 2018. Obviously Frankie Hickson and Kentory Matthews will get plenty of reps, but behind them there’s a lot of unknowns. Frank Boyd may be the next name to know.

“One person that stood out overall (in Saturday’s scrimmage) was Frank Boyd,” Coach Turner Gill said. “He had 2 carries for about 68-69 yards. Just the way he ran the football, he ran through several tackles several times during the scrimmage. It was really a surprise. I thought he had it in him, but I didn’t think I was going to see it this early.”

Boyd is a 5’11”, 180 pound redshirt-freshman from Manchester High School just outside of Richmond, Virginia. Both Gill and Offensive Coordinator Joe Dailey praised his ability to run through arm tackles and explode into the 2nd and 3rd level of the defense. 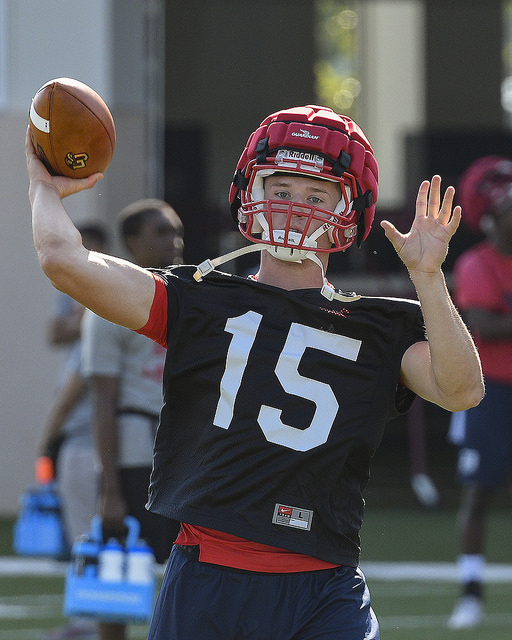 We all know Buckshot Calvert will be Liberty’s starting quarterback in the fall, and it was assumed that Mason Cunningham would be his backup. Maybe not.

“We’ve got some decisions to make as we move along with Cunningham and Buckshot in the same classification,” Gill said. “Whether we redshirt (Cunningham) or don’t redshirt him. As we move along that’s going to depend on what’s going on with Landon Brown and Brandon Robinson.”

Brown is a redshirt-freshman walk-on from Tulsa, Oklahoma who Gill says is the clear cut 3rd quarterback right now. Robinson is a true freshman that just signed with the program earlier this month.

“He’s a really young guy, really coach-able,” Dailey said of Brown. “He can do more with his feet than some of the other guys on our roster. He can run the football well. He’s made some really good decisions so far. I’m really, really excited about where he goes from here on out.”

With practices closed to the public, it is always difficult to know the full extent of who is dealing with injuries. However, we did get notification of several offensive players who have been hampered by injuries. Quarterback Rud Yearick, who missed all of the 2017 season with a torn labrum in his right throwing shoulder, still isn’t back from that injury. Gill says he is hopeful Yearick will be ready to go for fall camp in August. Other injured Flames include offensive lineman Sam Isaacson, wide receivers Lionell McConnell and Damian King, and tight ends Zac Foutz and Fidel Ogbeifun. McConnell and Foutz are out all spring with the anticipation that they will be ready by fall. Ogbeifun has been “on and off” according to Gill.

With the top two returning tight ends missing time, redshirt-freshman Jerome Jackson has gotten a lot of reps. Gill says he’s been doing a lot of good things, particularly in run blocking and his ability to catch the football, but he is still a bit raw. Michael Bollinger and Mitchell Lewis have also seen time at the tight end/fullback spot.

Depth a focus on the OL

With so many returners on the offensive line, Liberty’s offensive coaching staff is focusing on building depth, finding the 6th, 7th, and 8th guys in the rotation. This is a stark contrast from where the O-Line was just a couple of years ago as the starters were shuffled all season long. 4 of the 5 starters from last year return in Julio Lozano (LT), Tom Sargeant (C), Dontae Duff (RG), and Ethan Crawford (RT). The Flames will have to replace Michael Henderman at left guard and several guys are getting their chance to break into the starting lineup. Crawford is currently slotted in at left guard, with Damian Bounds, James Passmore, Tristan Schultz, and Isaacson all fighting to be in the rotation.

Newcomers Shaa and Huntley making an impact at WR

JUCO transfer Kevin Shaa and Colorado transfer Johnny Huntley are both making early and immediate impacts at wide receiver. Both of them caught a touchdown pass in the team’s first scrimmage this past Saturday. Gill says that Shaa has really good hands and if the ball is within his catching radius “it’s pretty much going to be a catch. He will be impactful and be able to help our team.” 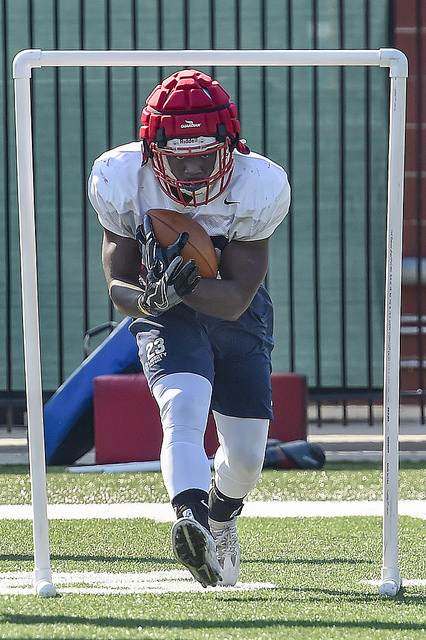 Listed at 6’3″ and 220 pounds, Huntley has already earned the nickname of 18-wheeler. At Colorado, he didn’t get much action at receiver as he was relegated primarily to a special teams role. Due to NCAA transfer requirements, he will have to sit out the 2018 season, but will have two season of eligibility left beginning in 2019.

Liberty went toe-to-toe with Old Dominion and James Madison in recruiting local Heritage High product Elijah Davis, who eventually signed with the Monarchs. Liberty’s Frankie Hickson, a Heritage alum, was Davis’ host for his official visit. When asked about meeting up with Davis on the gridiron to open the 2018 season, Hickson had this to say – “We lost him to ODU. He made his decision, and he’s an opponent now. I wish him nothing but success over there at ODU. He’s still a fellow Lynchburg kid. He’s still a Pioneer for life, and that’s what I am as well.”

Gill did highlight defensive linemen Devin Pearson, Mitchell Hurtado, and Elisha Mitchell as standouts from the scrimmage Saturday. “I saw them get off some blocks and had a chance at the point of attack,” Gill said of this trio. “They showed they could get off the ball, shed a block, and make a tackle.”

Pearson came to Liberty this semester after transferring from Mt. San Jacinto College. Hurtado, now a senior after transferring just prior to the 2017 season from Fullerton College, is now healthy after missing most of last season due to injury. Mitchell is a true sophomore from Virginia Beach that saw playing time in all 11 games as a true freshman in 2017 including 5 starts while recording 18 tackles. 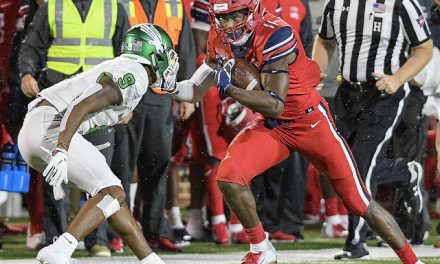 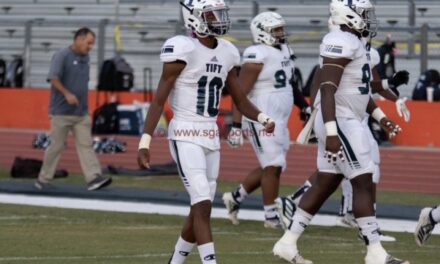 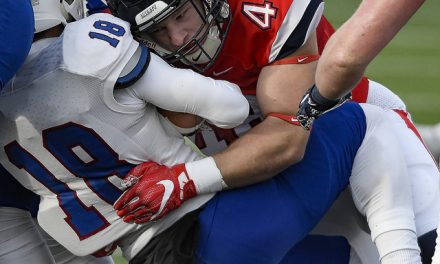 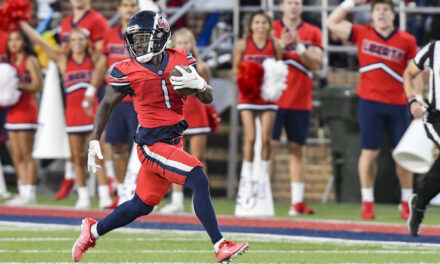