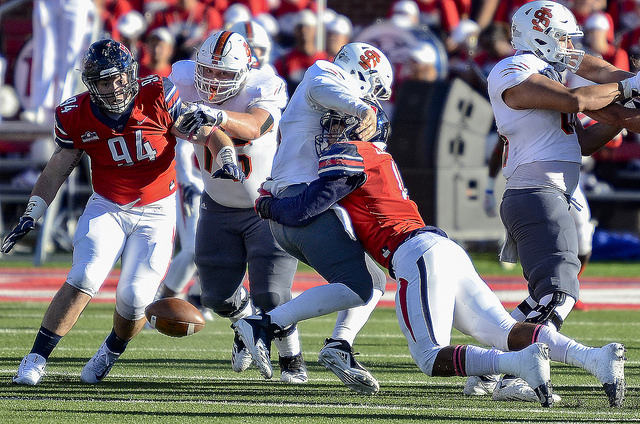 The Flames pick up their 2nd straight win for the first time this season, defeating Idaho State 48-41. It was another wild game with many twists and turns, but the Flames were able to make enough plays down the stretch when they needed them to get the win. The defense gave up over 600 yards, but the offense was able to put up enough points to outlast the Bengals.

Lemonier with his first strip sack on the afternoon – Jessie Lemonier had his best game with the Flames to date, and one of the best individual performances by a defensive linemen in a long time. He finished the game with 5 tackles for loss, 3 sacks, and 2 forced fumbles, but he got it all started with a strip sack late in the first half. Liberty was leading 13-10, and Lemonier was able to get to Tanner Gueller on a 3rd down play forcing a fumble that was recovered by Solomon Ajayi. A few plays later and Liberty pushed its lead to a two score game at 20-10.

Isaac Steele with his team leading 3rd INT in a crucial spot – Idaho State had taken their only lead of the game at 24-20, forced a Liberty punt, and was looking to extend their lead midway through the 3rd quarter. Isaac Steele had other plans. He intercepted Gueller in Idaho State territory setting the Flames up with great field position. Just two plays later Buckshot connected with AGG to put the Flames back ahead for good.

Buckshot finds DJ Stubbs for a clutch 3rd down conversion – Liberty led by 3 with about 12 minutes left in the game. The Flames had just forced an Idaho State punt and desperately needed to move the ball to eat some time and, preferably, push the lead back to two scores. After picking up one first down, the Flames were facing a 3rd and 15. Calvert was able to find Stubbs open in the middle of the field for a 23 yard gain and a first down. That play helped continue a drive that would go 13 plays and 80 yards for a touchdown and also ate up 5 minutes of clock.

Lemonier comes up big again – On the following possession, the Bengals were once again moving the ball, picking up positive yards on the first 6 plays of the drive to move into the red zone. Facing a 2nd and 5 from the 16, Lemonier again got into the backfield, this time he dropped Gueller for a loss of 8. Gueller lost control of the ball, it was recovered by an ISU lineman, but not before another 5 yard loss, for a total of a 13 yard loss on the play. Idaho State then threw two incompletions on 3rd and 4th down as the Flames got the ball back.

Hickson’s run puts the game on ice – Frankie Hickson broke free for a 47 yard touchdown run on LIberty’s first play after a failed Idaho State onside kick. The score, which came with 80 seconds left on the clock, put Liberty back ahead by two scores, this time at 48-34. The game was virtually out of reach at that point, despite the fact that the Bengals scored another touchdown with 22 seconds remaining. 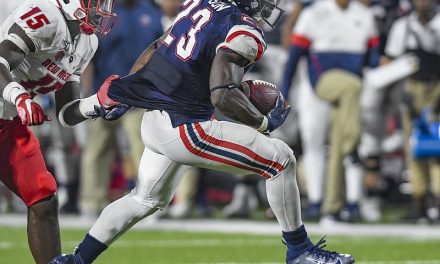