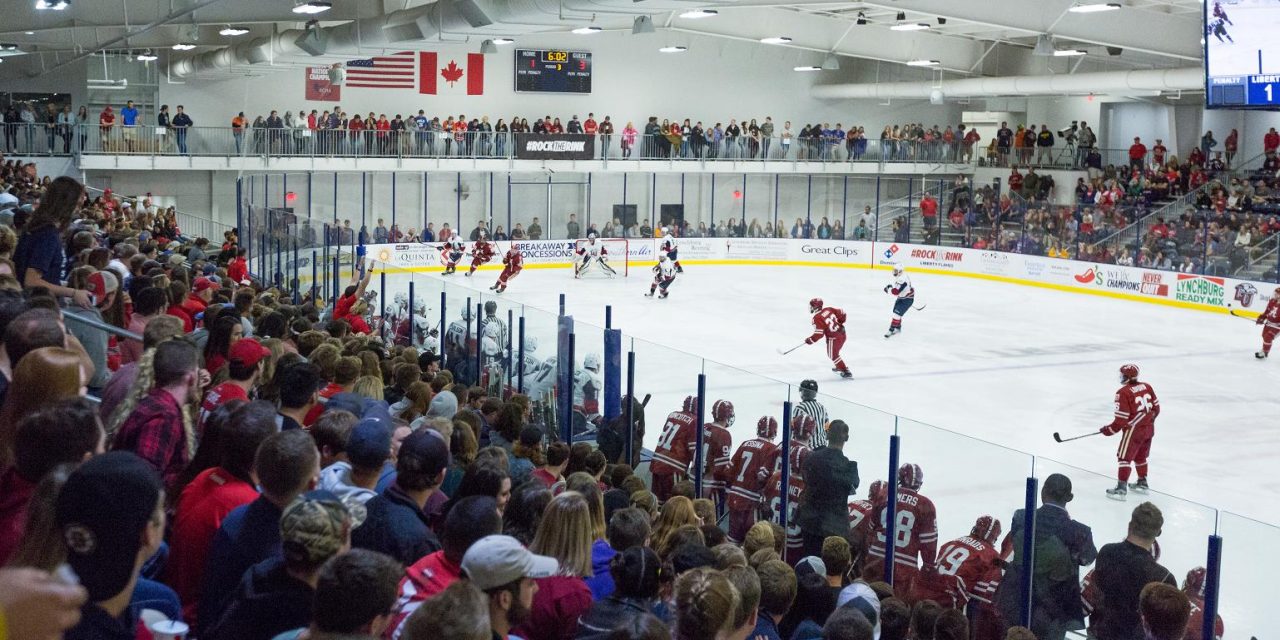 After a tough weekend where Liberty Hockey suffered two one-goal losses against a top 10 opponent, the Ohio Bobcats, the Flames face another tough test this weekend against the Seawolves of Stony Brook.  One of the Flames’ biggest rivals comes to town for a pair of matches at LaHaye Ice Center, with both contests starting at 7pm.  The Seawolves come in ranked #9, while Liberty dropped one spot to #14.  In preparation for this heated rivalry match up between the top two teams in the ESCHL, we sat down with Peter Lupfer, a beat writer covering Stony Brook Hockey.  A Sea of Red would like to thank Peter for his time and contribution.  We look forward to a great weekend of hockey at the LIC. Both games will be streamed live on ESPN3, LFSN, and the Big South Network. Go Flames! 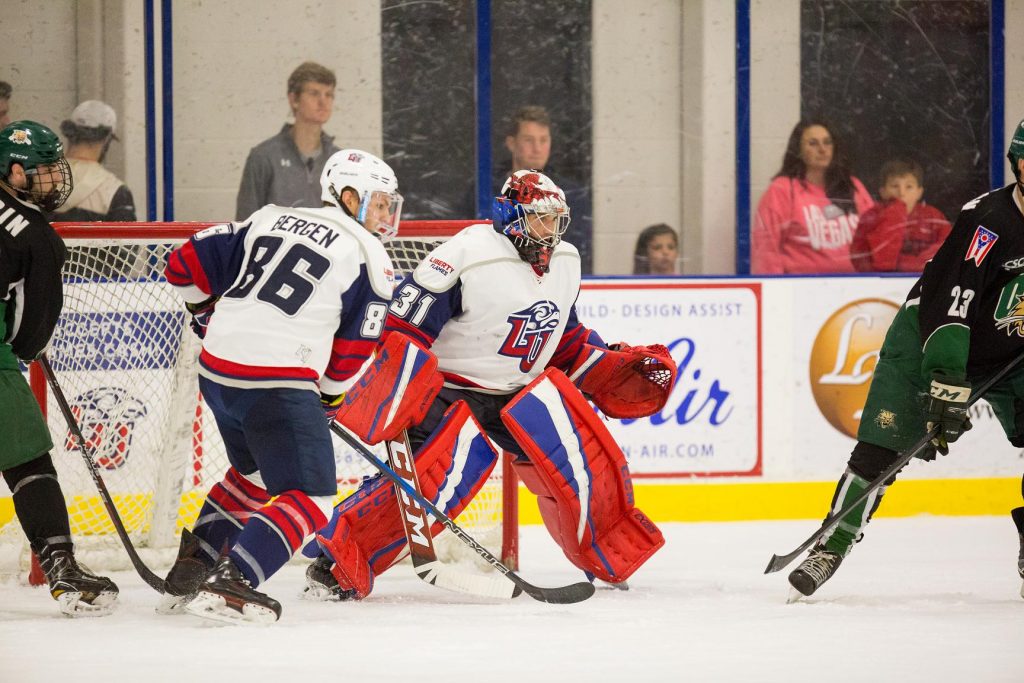 Duke Cuneo: Tell us a bit about yourself and your relationship with Stony Brook hockey.

Peter Lupfer: When I realized a few years back that playing hockey professionally wasn’t a realistic goal, I knew that I had to find another way to be involved in the sport. I’ve always had a love for writing and one day it just clicked that being a sports journalist was what I wanted to do. When I started at Stony Brook in August, I quickly got involved with The Statesman and upon finding out that no one had consistently covered Stony Brook Hockey in years, I stepped in and made it my beat. Although I have only been covering the team for about two months, I have established a good, professional relationship with the program and thoroughly enjoy covering the team.

Duke Cuneo: SBU and Liberty have a pretty good history of on the ice rivalry. Of course the two are conference mates now for the second season. How does the team and coaching staff view the rivalry?

Peter Lupfer: From what I can tell this is a matchup that gets circled on the calendar most years, but especially this season after Liberty ended the Seawolves’ ESCHL championship streak last February. From the first time I spoke to some of the players, they mentioned this weekend as one they were looking forward to so I think that the rivalry does mean a fair amount to Stony Brook and we can expect to see that in the way they play Friday and Saturday.

Duke Cuneo: SBU won the ESCHL regular season last year, but lost to Liberty in the tournament. Does the team or coaching staff feel as if they are looking for some measure of revenge?

Peter Lupfer: I get the sense that Coach Garofalo and the returning players feel that they have some unfinished business to take care of this weekend, but keep an eye out for the freshman as well. They’re aware of the meaning of the games and have the potential to be a determining factor.

Duke Cuneo: What are the Seawolves’ expectations for the season?

Peter Lupfer: The Seawolves’ expectations haven’t really changed from what they’ve been the past few years. They are a very strong team and their ultimate goal is to win their first national tournament. Personally, I think it’s a highly attainable one. The Seawolves carry four impressive goaltenders on their roster, their defensemen make very calculated decisions, and they can roll four lines without a weak link. When they’re firing on all cylinders, it’s hard to stop them.

Duke Cuneo: We are seeing an increase in NCAA transfers coming in across ACHA division 1. Does SBU have any such players, and does the coaching staff actively seek guys from those programs?

Peter Lupfer: There are seven players on the roster who formerly played NCAA hockey before coming to Stony Brook. A lot of those players have become key pieces of the team and are a big part of why Stony Brook is so successful. Coach Garofalo works very hard in his recruiting efforts to acquire the best talent possible no matter where it is coming from, so I wouldn’t say that there has been a specific focus on the NCAA, but those who have played at that level usually will catch your attention.

Duke Cuneo: Who are some key players on the team that LU fans should keep an eye on?

Peter Lupfer: One player who has really impressed me as of late has been freshman forward Joey Slevin. He got off to a bit of a slow start to his Stony Brook career, but over the course of his past seven games he’s picked up 10 points and has been playing with a lot of skill. Another guy to watch is junior forward Brad Riccardi. Five of his seven goals have been in the past four games and he’s been a real force on the ice. Lastly, sophomore goalie Payne Yoder has had a strong season so far with a 5-0-1 record. If I had to guess, I’d say that he’ll likely play Friday night and potentially Saturday as well, but whenever he is in net you can expect his best.

Duke Cuneo: How would you describe SBU’s style of play? Is this year’s team significantly different than last season’s

Peter Lupfer: For the most part this team has the same high flying offense that it has for the past few seasons. The Seawolves lost a couple of key players in Hall and Stemke last year, but collectively this group has been able to fill the void and keep rolling.

Duke Cuneo: What are the keys to this weekend’s games?

Peter Lupfer: For the Seawolves I’d say the key is to dictate their game from the drop of the puck. If they can grab an early lead, it may be hard for the Flames to get back into it. From Liberty’s perspective, a key would be sticking with Stony Brook for a full 60+ minutes. The Seawolves keep working hard and never give up no matter what the scoreboard says so the Flames can’t let their guard down.

Duke Cuneo: Give us a plug as to where our readers can find your work, as well as your social media accounts.

Peter Lupfer: With Yoder in net and the history of the matchup, I’d expect Stony Brook to win Friday’s gams 4-2. Saturday could be a closer one and may even need sudden death. I’ll say 5-4 Seawolves in overtime. 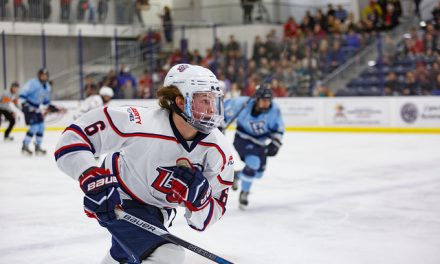 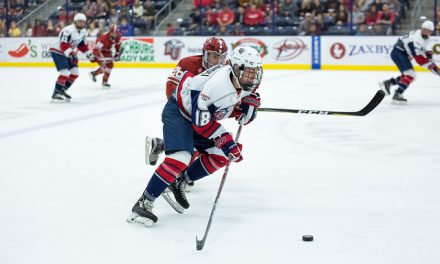 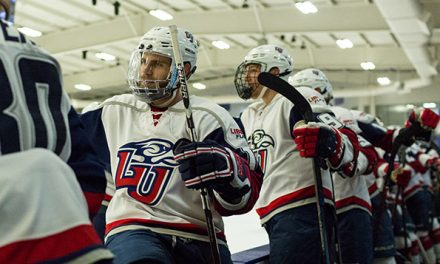