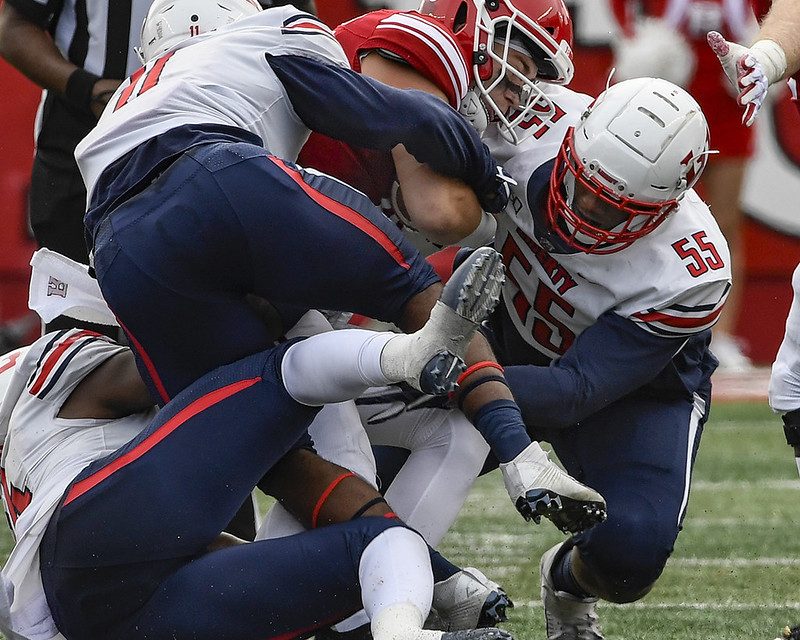 FLAMES HAD A CHANCE TO WIN, LOSS IS HARD TO SWALLOW

“It’s hard to swallow when you lose a game that you feel like you had a chance to win,” Liberty head coach Hugh Freeze said immediately following his team’s loss at Rutgers, 44-34. “Certainly they had a chance to win it too, it wasn’t like we were the much better talented team. I told our kids all week it’s a toss up game. We can win it, they can win it.”

The Flames were favored by 7.5 entering the game and had chances to win the game. The offense certainly proved it could move the ball against a Big Ten defense, finishing the game with 413 plays while averaging 7.0 yards per play, more than Rutgers 6.1 yards per play.

Rutgers’ big, physical offensive line was too much for Liberty’s undersized and undermanned defensive line to handle. The Scarlet Knights dominated the time of possession, maintaining the ball for 40:48 of the game as they rushed 55 times for 278 yards.

Liberty finished the game with 9 penalties for 70 yards, and many of those penalties came at crucial times.

With the Flames prepared to go for it on 4th-and-goal from inside the 1 yard line, Sam Isaacson was whistled for a false start as Freeze called on Alex Probert for the chip shot field goal.

When Liberty attempted an onside kick and recovered it, Jessie Lemonier was whistled for being offsides. The Flames were also whistled for delay of game twice, including one that was the first play of a drive.

“We haven’t had a false start all year, we had 3 today,” Freeze said. “I will have to look at the film. Our kids said they were getting some cadence things from the other side of the ball. I kept asking the officials, they said they hadn’t seen any. We hadn’t had a false start all year and today we do. The delay of games, that’s on us as a coaching staff, that can’t happen. We’ve got to communicate faster and more efficient.” 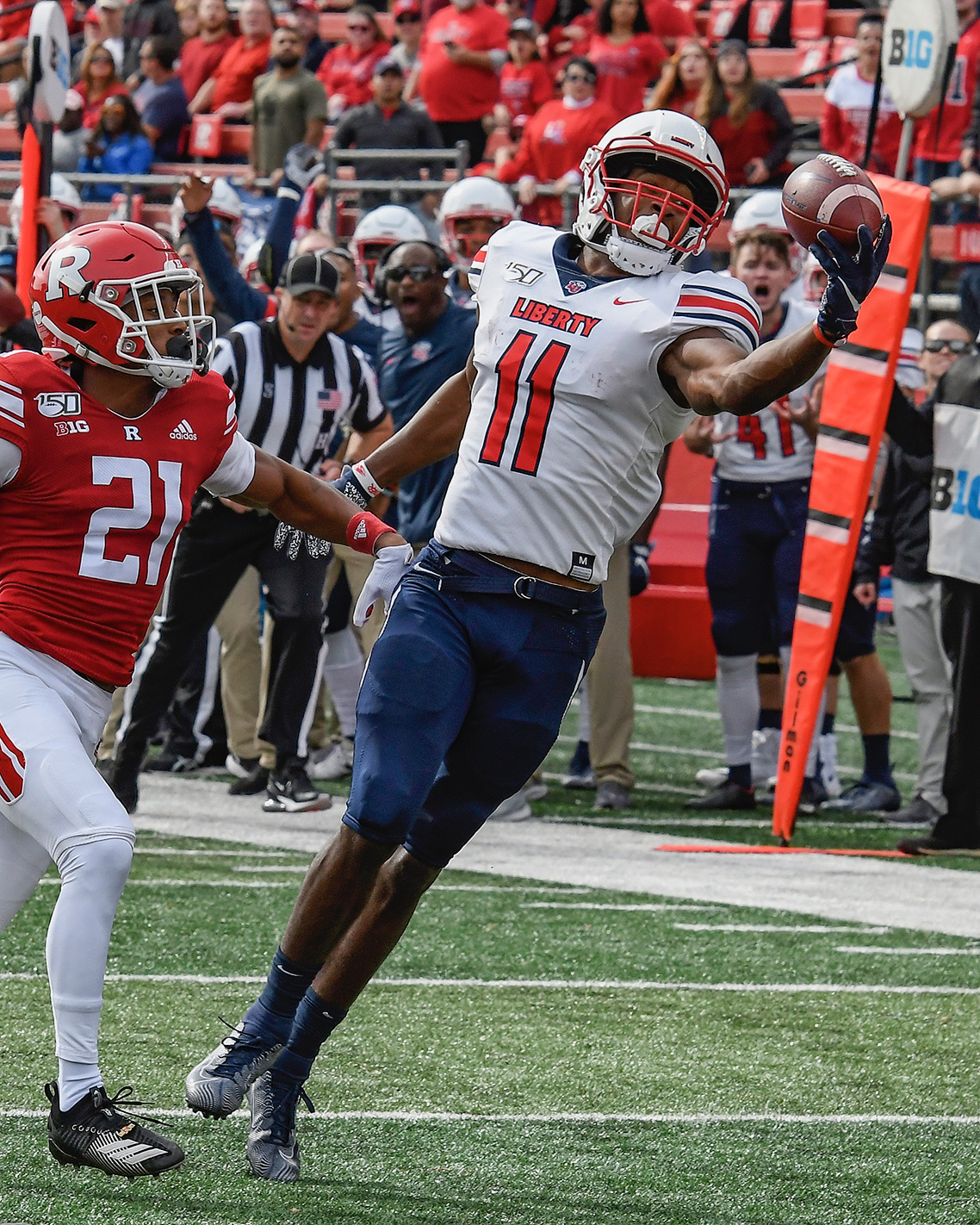 Kick returner and true freshman Shedro Louis was injured late in the Maine game a week ago, and he was unable to go against Rutgers Saturday. Louis has quickly proven his worth as a kick returning, highlighted by his kick return for touchdown last week.

Ceneca Espinoza took the bulk of of the reps as kick returner Saturday afternoon, while true freshman Treon Sibley got his first collegiate action, fielding one kickoff.

Espinoza took a big hit that caused him to fumble the football on a 3rd quarter kickoff. Rutgers recovered and put 3 more points on the board in a crucial series of events.

“The fumbled kickoff really hurt us,” said Freeze. “That got it to where it was a two score game. That was difficult at that point in the game. We really needed possession of the ball. That mistake hurt, but it still came down to them controlling line of scrimmage.”

Sibley only got the one play, late in the first half, and he is expected to redshirt this season as he could still play in 3 more games this year.

“We certainly missed Shedro and (Damian King),” Freeze said. “Hopefully they will be ready to go next week. We will monitor Sibley, we will be fair with him on that, but I was just trying to get somebody that could maybe give us a spark in the kickoff return.”

Linebacker Brandon Tillmon was a late scratch from the game as he continues to deal with a stress fracture in his foot.

“We missed Tillmon today, for sure,” Freeze said. “Inside the box, Brandon’s a thicker kid that is more suited to that type of run stop stuff. It was not helpful that we were without him. It did hurt.”

Perhaps Liberty’s last chance at making a late comeback was when the Flames lined up for an onside kick when trailing by 14 with just over 5 minutes left in the game. Alex Probert executed a perfect kick and Rion Davis was able to recover it. Unfortunately, Jessie Lemonier was called for being offsides on the kick. On replay, it looked like Lemonier had not crossed the line of scrimmage prior to the kick.

“The guy on the other side of the field threw the flag on Jessie who was on our side,” Freeze explained. “I’ll have to see the film. It didn’t appear that we had anybody that was offsides, but I will have to watch the film.”

Lemonier agreed with his coach.

“I guess they thought I ran past the ball,” Lemonier said who played every defensive snap except for one. “I don’t believe that was offsides, but whatever the call goes.”

As Liberty drove early in the 3rd quarter to attempt to tie the game at 28, Buckshot Calvert was stopped just short of the goal line on a beautifully designed and executed naked bootleg. It looked like Buckshot was going to be able to reach the end zone easily, but the Rutgers defender was able to recover quickly and wrap him up inside the one yard line. After a false start on 4th and short, Liberty had to settle for a field goal.

“I tried to sell it as good as i can, but he got the angle and did a good job collapsing and made the play,” Calvert said after the game. “I was in the motion of (stretching for the end zone), but he wrapped me up so I couldn’t really extend my arms.”

QB LANGAN RAN ALL OVER FLAMES

Redshirt freshman quarterback Johnny Langan had the best game of his early career on Saturday. He completed 15-of-21 passes for 192 yards and his first two touchdowns of his career. He really hurt the Flames with his legs though, as he ran for a game high 118 yards and another touchdown on 21 carries.

“We did plan on him running a lot, but we didn’t expect him to be bigger and harder to tackle,” Lemonier said. “That goes back to us tackling, we have to do a better job of tackling.”

Flames in the NFL: Week 1 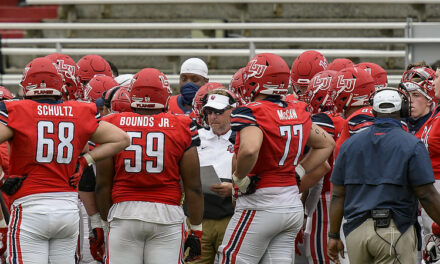