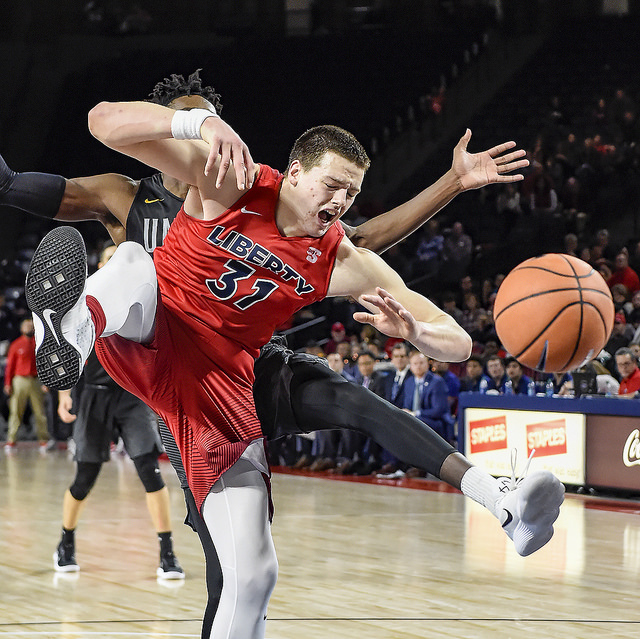 Gardner-Webb’s Liam O’Reilly had a career day to lead the Runnin’ Bulldogs to a 58-55 win over Liberty to open Big South play for both teams.

The senior guard finished with a career-high 27 points while connecting on 7 of his 11 three point attempts, including 6-of-8 in the 2nd half. His final 3 pointer came with 55 seconds remaining, gave the Runnin’ Bulldogs a 5 point lead, which was too much for the Flames to overcome.

After a Caleb Homesley layup with 40 seconds left to cut the GWU lead to 3 and a missed jumper by the home squad, Georgie Pacheco-Ortiz’ 3 pointer missed as time expired.

Liberty struggled from the floor all afternoon, shooting 37% and just 18% from 3.

Scottie James led the Flames with another double-double, finishing with 11 points and 13 rebounds. Lovell Cabbil and Elijah Cuffee each added 9 points, while Ryan Kemrite finished with. Georgie Pacheco-Ortiz had 7 points and 4 assists.

After suffering an ankle injury in New Orleans causing him to miss the previous game against Alabama State, Myo Baxter-Bell returned to the lineup on Saturday. He had 6 points in 19 minutes.

Liberty returns to action Tuesday night in the Vines Center against Charleston Southern.