This weekend, the Liberty Flames and the Old Dominion Monarchs will meet on the gridiron for the first time between the in-state opponents. Both teams come into the game sporting identical 3-2 records.

This is a nonconference game as the Monarchs are in a transition year from the FCS to Conference USA and the FBS.

Why ODU can win this game

Because that’s what they do. During the last 3 regular seasons, including this one, the Monarchs are 22-3 against FCS opponents. ODU is also 5-0 all-time against Big South opponents with the average score being 40-24. That includes last year’s win in the FCS playoffs over Coastal Carolina 63-35.

Old Dominion scores and scores in bunches. In their 3 FCS games this year they have scored an average of 67 points per game. SIXTY-SEVEN!!! That’s unheard of.

Get used to the name Taylor Heinicke if you haven’t already. ODU’s quarterback, who already has a career and a half’s worth of awards, is rewriting the Monarchs’ young program’s record books. Through the first 5 games this season, Heinicke is 139/187 passing for 1,638 yards, 12 touchdowns and 3 interceptions. Those 3 interceptions all came in the game against Maryland where the Monarchs fell 47-10. Heinicke can also pull the ball down and break off a big run as well, as he’s the Monarchs 2nd leading rusher this year with 203 yards and 4 touchdowns on 41 carries.

Heinicke likes to spread the ball around as 13 different Monarchs have at least 1 reception on the season. His favorite targets are Larry Pinkard, Blair Roberts, and Antonio Vaughan. This trio has combined for 76 receptions for 949 yards, and 9 touchdowns in the first 5 games of the season.

The Monarchs can run the ball as well as they are averaging over 180 yards rushing per game led by Colby Goodwyn’s 273 yards and 7 touchdowns on 54 carries.

This is homecoming for Old Dominion and they are expecting another sellout of 20,000 or so Monarch fans inside Foreman Field.

The Flames will need to be able to successfully move the ball on the ground and control the clock. Keep Heinicke & company on the bench. Look back at the only FCS team to beat ODU in the past 2 regular seasons and how they did it. Villanova won the time of possession battle 40 to 20 minutes. They did this by gaining 5.6 yards per rush on 67 rushing attempts. That’s ball control folks. Villanova controlled the game and won 38-14.

Another facet of the game critical to Liberty’s success is turnovers. The Flames must win the turnover battle.

Since ODU constantly has 4 or 5 wide receivers on the field, the Flames will likely stay in their nickel or dime packages most of the evening. So, putting pressure on Heinicke will fall to Liberty’s defensive line. The Flames need to be able to rush 4-5 and get in the backfield. If the Flames allow Heinicke to sit back there with all day to throw, he will torch Liberty’s defense. That’s how Maryland held the Monarchs to 10 points, getting pressure on Heinicke while only rushing 4-5 guys. Obviously, Liberty’s not as talented as Maryland so this will be a tall order.

There’s no way Liberty’s defense, talented as it is, will be able to completely throttle the Monarchs. If you think that, you’re nuts. But they can hope to slow Old Dominion down. Force turnovers, don’t give up big plays, make the Monarchs drive the length of the field, keep the game in the 30’s.

Having said that, Liberty’s offense must put points on the board. 10 (Kent State) or 21 (Richmond) points won’t cut it. The Flames will need to score at least 30 points to win this game, and that’s probably low. A defensive score or two or a special teams score would help.

Liberty’s front line must be able to create havoc in the Monarchs’ backfield. This doesn’t have to result in sacks, but it does have to force Heinicke to hurry his decisions. This will also allow the Flames to drop 6-7 in coverage.

If Heinicke consistently has all day to throw, he will lead Old Dominion to an easy victory. 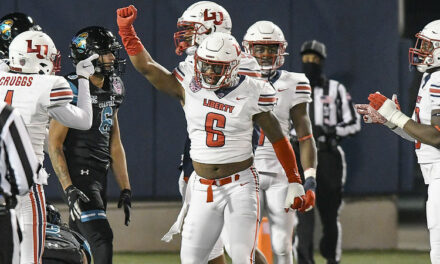 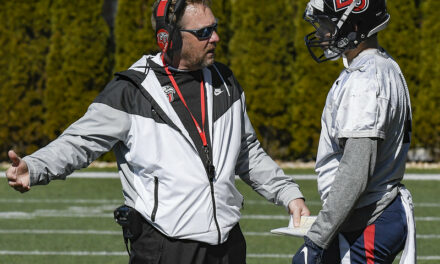 With cancellation of spring practice, Freeze left with a lot of questions 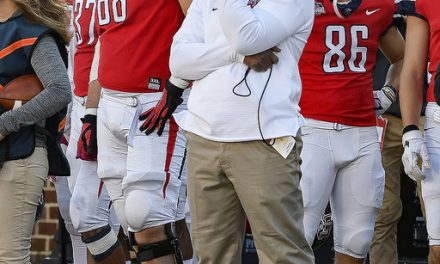 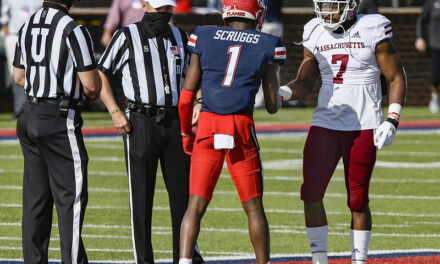