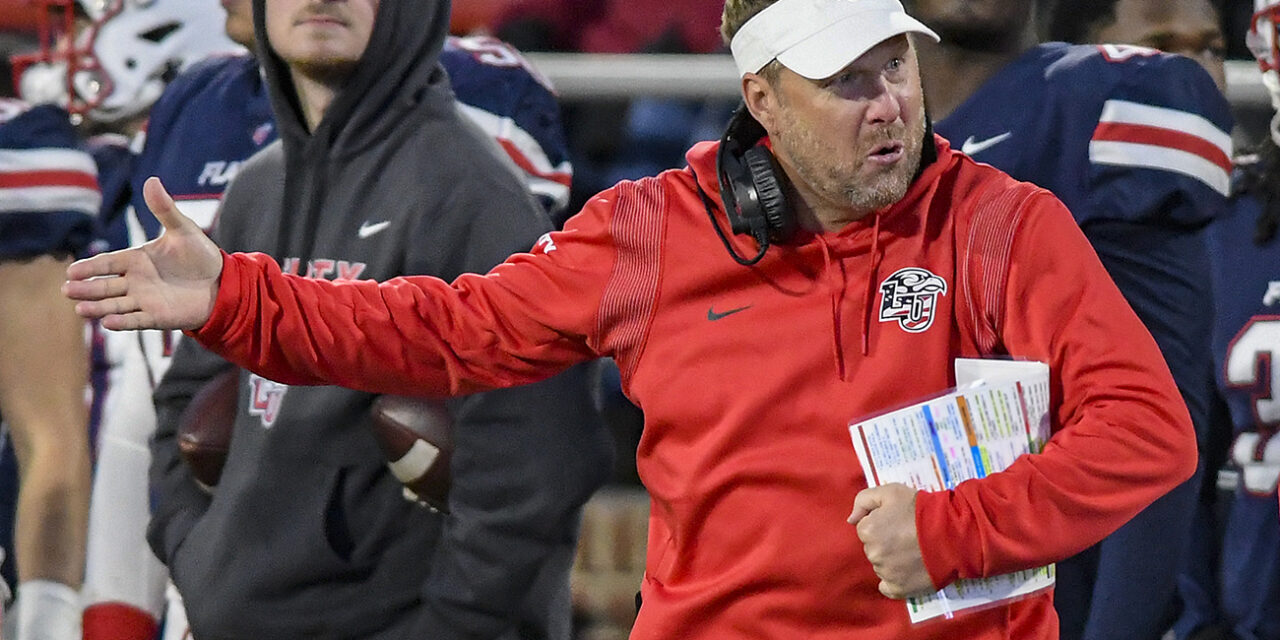 The Liberty Flames (7-4) will look to bounce back from a disappointing, 42-14, loss to No. 21 Louisiana this past Saturday. The loss snapped the team’s 15 game home win streak which was the fourth best active streak in the country and the longest in school history. This week, the Flames play host to Army (7-3) in the regular season finale. Kickoff is scheduled for noon at Williams Stadium in Lynchburg, Virginia in a game that will be carried on ESPN+. Coach Freeze met with the media for his weekly press conference on Monday and here is everything he had to say beginning with his opening statement.

“I’m ready to put last week behind us, for sure,” he said. “We had good meetings this morning and the truth of the game was our defense played, maybe, their best half of football in the first half all year. Offensively and special teams we were just really off, really, really poor. I don’t remember a game where we had six turnovers before that I coached in. You’re not going to win any games when you turn the ball over that many times. We did it special teams twice and on offense four times. You can’t overcome beating a fine football team like Lafayette doing those things. It’s ultimately our job to get them prepared to play. We certainly were off. That’s really the first time I have felt like that in our three years here. It’s disappointing, but obviously we still have a lot to play for with a great team like Army coming in here to close out the regular season and send our seniors who have done so much for this program. I hope we will have time to talk about later, even more, because these seniors have really made this program relevant. It’s going to be sad to say goodbye to a lot of those. They deserve to go out the right way, and hopefully everyone in this building understands that and will prepare accordingly to play a good football team in Army.”

“That’s the truth of the game. I also would like to say congratulations to our field hockey team. I thought that was incredible, incredible achievement. The way they represented our university and our foundation in Christ I thought was incredible. Proud for them. I know that had to be a great memory for them, their coaches, and everyone involved. So, let’s get ready for Army.”

CAN YOU EXPLAIN HOW SPECIAL IT HAS BEEN TO HAVE MALIK WILLIS AT LIBERTY THESE LAST TWO YEARS?

“We’re going to support Malik and his family in whatever they decide. Certainly, they will gather all the facts when this season is over, and make what they think is the best decision for them. We will support them when that time comes, in the mean time, I certainly think you are right, he has brought a lot of excitement with the other seniors and players that have helped make this program more relevant. It’s not just him, but obviously watching a talent like him that doesn’t happen all the time. We certainly hope to recruit some more that are like him so that we can continue winning and going to bowl games and ultimately winning a conference championship in a few years. In the meantime, I sure hope that all of our people and fans send our seniors out with great gratitude. Malik is a big part of that for sure and he is a special talent.”

ARMY’S DEFENSE HAS BEEN REALLY GOOD THIS YEAR.

“They really have. I truthfully don’t know that I’ve ever put on a tape, and I watched a ton of tape yesterday and this morning, I don’t know if I’ve ever seen a team that plays harder than they do. That’s a great testament to the character of their team and their coaches. Defensively, when you look at them holding Wisconsin to 20 points and other teams like Georgia State, who has some really good players, to low point totals of the year, their defense is really talented. 34, I think, leads the nation in sacks. They are not just an offensive team, for sure, they play really quality defense.”

WHAT MAKES THEIR DEFENSE SO EFFECTIVE?

“They are in the right spots and how hard they play. They may not be the most athletic team that you might see, but man they play with a physicality and extremely passionate. They don’t get out of position pretty much at all. You really have to drive the field without making mistakes. Then, converting in the red zone has been very difficult for people too because of the way they play. They have a great scheme. Woody’s been a great coordinator a lot of places. He is doing a great job with their scheme and then their kids just play extremely hard, tackle extremely well too.”

HOW MUCH DOES PLAYING A TEAM LIKE ARMY FORCE YOU TO BE MENTALLY LOCKED IN?

“I think that’s the huge challenge is locking a team in in this day in and age when there is so many distractions. In our case, we have to fight the battle of where we’re bowl eligible. We have to fight this battle of there is still a lot to play for and the level of expectations to which we should compete should not change. I do think that’s a battle for us and probably for others team too that they are facing week in, week out if a team’s not bowl eligible or if they are already bowl eligible and they can’t win their conference championship. All of those things kinda factor into this day and age of coaching. You have to be a psychologist. We will have to work extremely hard to hopefully helping our kids understand how we should compete on this given Saturday. Hopefully that’s what you will see.”

IS THE BIGGEST CHALLENGE THIS WEEK ENSURING YOUR TEAM IS FOCUSED ON THE TASK AT HAND?

“It’s got my full attention, I assure you. I’m not happy at all with the way we competed, it was embarrassing. Hopefully our kids feel that way too, we will find out a lot about our team this week. They have responded well this morning, for sure, when I gave them the truth. I didn’t pull any punches, thought they handled it well. We just finished one walk-through and I thought the offensive guys were great. Defense is doing theirs now. I will talk with them when we get through. I think the key is exactly what you all have hit on is making sure we are all locked in this week. They are very difficult to play to begin with. With this type of offense and as good as they are playing on defense, but offensively it’s totally different. You’re going to ask kids to do things this week that you haven’t asked the to do all year. We will see how our kids adjust to it. They will have to definitely be locked into it.”

IS THERE ANYTHING SPECIAL ABOUT PLAYING AGAINST A SERVICE ACADEMY?

“After the game we will be sure to tell them how much we appreciate their mission, their commitment to our country, but prior to the game it’s another game that we have to get prepared for to play a very good football team whether they are a service academy or not. We’ve been pretty consistent in that for the most part of our three years. We’re going to have to be that this Saturday to compete with this team. But certainly, after the game, I hope that we can make them feel like we appreciate them for sure because their ultimate mission goes way beyond football.”

HOW IS JAVON SCRUGGS THIS WEEK?

“He’s seeing the doctors this afternoon and we will see what that report comes back. It is concerning for sure. He is one of our leaders. We are already down Quinton at safety. You certainly need somebody who knows what they’re doing back there to adjust to everything we’ve got to see this week. We shuffled some people around today in walk-through, but hopefully we will get good news on him but it is concerning.”

ANYTHING SPECIAL PLANNED FOR THANKSGIVING THIS WEEK?

“We started this morning. I teach a class on Monday mornings and I had that planned long out. It was perfect for what we are going through right now, but also spent a little extra time talking about what thankfulness looks like, what gratitude looks like, and we will continue that throughout the week.”

“Tuesday, every position room adopts a family here in Lynchburg and we will deliver to them their Thanksgiving meals and goodies that we have all collected. We will do that earlier this week. Then, Thursday we will have another team meeting where we talk about thankfulness again and have Thanksgiving lunch together, for sure, and then most of our positions are headed to their coach’s house that night to make sure they are not alone and be together for Thanksgiving.”

WHAT ARE SOME OF YOUR BEST THANKSGIVING MEMORIES FROM WHEN YOU WERE GROWING UP?

“My Thanksgiving on the farm where I was raised was happy. Everybody, all your cousins, and all of us sat at the little table until we got big enough to move to the big table. The uncles and aunts and everything, the turkey and dressing and the rolls, and all the good food. Then, the tradition after Thanksgiving was over, we hit the front yard and played tackle football, all of us. It was always a blast until we got bigger and it started hurting a little more. Our uncles used to do it with us for a while and it was always a blast getting family together. It was always a special time for my entire family.”

“It has definitely changed since I’ve entered the college coaching world. My parents were here this past weekend along with Jill’s and we had Thanksgiving Friday night at our house before I went to the hotel for team meetings. My mom brought her dressing, Jill cooked some things, we had our family there with all my daughters who are back in town. That was good. Thanksgiving in college coaching you are with your football family and I love doing that also.”

“Absolutely not, no cranberry sauce. Just give me the dressing. Favorite side is cream corn or butter beans, both.”

TRACE ADKINS IS SUPPOSED TO BE AT THE GAME IS HE DOING ANYTHING SPECIAL BEFORE OR AFTER THE GAME?

“You will have to ask marketing that. That’s what he shared with me. He thought he was coming back to sing the national anthem for the Army game. I haven’t talked to Trace. I may shoot him a text today to ask, but marketing handles all that. I don’t know that for a fact but that is what I was told that week. 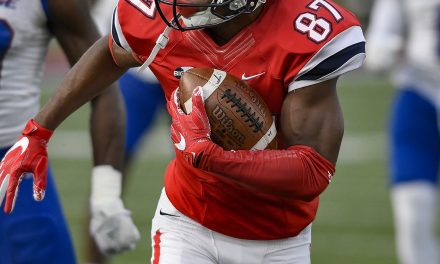