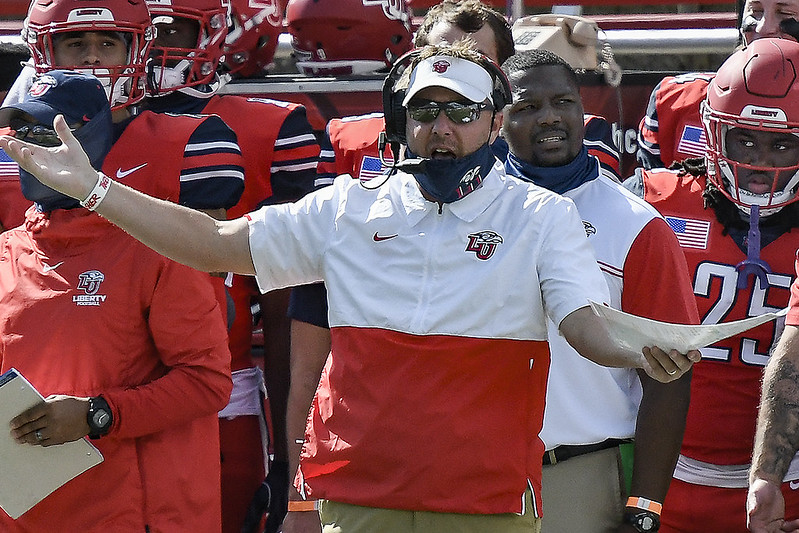 Liberty head football coach Hugh Freeze met with the media on Monday following his team’s first loss of the season at NC State on Saturday as the Flames fell out of both the Coaches and AP Top 25 polls. This Friday, Liberty returns home for senior day against UMass with kickoff scheduled for noon on ESPN3. Here’s everything Freeze had to say in this week’s press conference, beginning with his opening statement.

“Happy Thanksgiving week. We’ve already had a great morning talking about things you’re thankful for and what our responses to those things should be. Got a special visitation this morning from Grayson in Florida who we happened to visit in the hospital when we were there for the Cure Bowl. We celebrate with him today that he is cancer free. He and the team rejoiced with him over that. It was good to have him there.”

“Today’s word for Thanksgiving is grace and we’re thankful for grace from above and obviously grace from people that have given it to us in life. Hopefully our kids will have a great response to let people know that as we go through the day.”

“That’s the way we kicked off the meeting this morning as well as the truth from the game Saturday which we lost. Obviously felt like it could have gone either way. It’s been very difficult for me. Yesterday, last night, were not much fun. I got a sick feeling in the pit of my stomach because I feel like I didn’t do well enough for our kids to cross the line. I take great pride and our staff does in even when you’re maybe not matched up roster man to man getting games in the 4th quarter and giving us a chance to win. Just feel like I didn’t quite get it done for our kids. It’s a sick feeling. It’s hard to win college football games. I say that all the time. I don’t know that the media believes it when I say that, but it’s very difficult. Proud as heck of our kids, they fought like warriors in a very physical, tough, hard nosed Power Five football game. They fought and gave us a chance to win the game, we just didn’t make enough plays to do that. Probably our best defensive outing since I’ve been here, so I’m really, really proud of them. NC State defensively is the best defense we’ve played since I’ve been here. They are really talented on that side of the ball. It’s difficult, don’t like it, but we’ve got to put it behind u s and it’s time to move forward and try to remain undefeated at home for this 2020 season.”

HOW IS CJ YARBROUGH AND JACOB BODDEN PLAYED A LOT OF SNAPS AT LEFT GUARD?

“CJ is in concussion protocol so we will just trust the doctors with that and see how that goes throughout the week. Bodden, we feel like he has earned that right to play there a long with Bounds too, don’t mind playing either one of them, but Bodden’s had some really solid games.”

HAVE YOU HAD A CHANCE TO REMINISCE ON THE 10-GAME WIN STREAK YET?

“All I’ve been thinking about is that dang game Saturday night, mostly. It’s sad really when you put it like that. Listen, this program to be going toe to toe with Virginia Tech, Syracuse, and NC State in year two and have the second longest winning streak in the nation in college football, three weeks in the top 25, we have so much to be thankful and grateful. That should far out-shadow us not winning a game that we had a chance to on Saturday night, for sure. I got a phone call from one of my SEC buddies, head coach in that league, he said, ‘I know you. I know how you are feeling. I saw how the game ended. I just want to remind you of something, two years ago we could have scored 100 points on the Liberty team. So, for ya’ll to be where you are right now, it’s remarkable what you, your staff, and kids have done.’ There’s so much to be thankful for. All the things that you mentioned, it’s obviously a lot of people that put into that particularly with the 2020 year from our administration down to all of our medical teams and nutritionists, strength staff, everybody has played a huge role in getting us to accomplishing all of those things that have been accomplished.”

HOW WOULD YOU ASSESS THE WAY YOUR TEAM PERFORMED IN THE THREE POWER FIVE GAMES?

“They’ve obviously helped prepare us, that’s provided we handle the disappointment from Saturday correctly. It’s fairly easy to feel good about yourself when you win, even though I think that could be an issue too. Obviously, this is our first experience in a long time with losing a football game. I’ve got to be sure I handle it right, our coaches have to be sure they handle it right, and certainly our players have got to handle it properly. You tell me what non Power Five school has played three Power Five opponents this year. We played them all tough, won a couple and could have won all three. I know that those have prepared us. Now, we’re beat up today and we’re not as deep as I’d like to be in some places and all of that. This is a critical week for us to manage not only getting ready schematically for an opponent, but also making sure we get our kids as healthy as our kids can be to be able to play on a short week on Friday.”

WHAT ARE YOU THANKFUL FOR FROM A FOOTBALL PERSPECTIVE?

“I’m thankful for these coaches and these players and this school and obviously winning makes you feel more thankful. I think that’s a shame that I probably would feel somewhat less thankful. The truth of the matter is for people of faith, if God never does anything else for me that I think is a blessing or good, He’s already done enough. That’s the kind of approach I took with our team this morning. Today’s word was grace that I talked to about with our kids. What does that look like, what does that look like from us in a spiritual realm, what does that look for us as a team, what does that look like for us in relationships? I’m extremely thankful for just being able to be involved in building this program and bringing it some, not that we desire, notoriety, but it’s really nice. Our program has been on every major broadcast, we’ve been on national TV, we’ve been on GameDay. Those things all give you a sense of joy and pride that we’ve been able to do that together.”

WHAT STRENGTHS & WEAKNESSES DO YOU SEE IN UMASS?

“Unfortunately, I’m really behind. I’ll get caught up shortly today and tonight because of our quick turnaround, but I haven’t seen them on offense yet. Defensively, they are a lot better than they were last year. I’m happy for Coach Bell, but I hated to see that. They are doing some good things, they are playing a lot of man coverage and they are athletic, got some good transfers there. We’ve got to get ready to play, obviously, to score some points, but they are definitely improved on the defensive side. I haven’t had a chance to watch them on offense yet.”

DID YOU NOTICE ANYTHING ON FILM THAT NC STATE DID TO SLOW DOWN YOUR OFFENSE?

“No, nothing schematically different, just it’s hard on film sometimes to tell how explosive and how good they run. I said last week as of late I was shocked that they had lost three games. I think you might see them win out. They are finally healthy, they had all their COVID issues at the beginning. They had closing speed. They had Power Five closing speed. We had a heck of a time handling 29 and 1, nose guard and middle linebacker all night. Those are NFL guys for sure, but it wasn’t anything different schematically. It was the first game we could not stay balanced and they were able to play a lot of coverage against us because we weren’t having success running the football.”

WHAT HAVE YOU PICKED UP FROM YOUR TEAM AFTER A LOSS?

“They are tough-minded. They are in each other’s corner. For those that feel like they didn’t play as good as they could have, the others are trying to constantly pick them up. Look, football, to me, there are games when the defense struggles and gives up 30 points and the offense’s job is to score 31. There’s games that are the exact opposite when the defense plays their tails off and offense can’t get it done and they need to be able to get it done. I saw that in the locker room that night. Everybody is down this morning a little bit, I still get it, but after our team meeting I think we picked it up a little bit and we are focusing on what we have to do now and that’s get ready for this next one and finish out what’s been a very, very special season. I don’t know how we will respond, exactly, yet, but I’m confident, cautiously optimistic that our kids will respond well and defend our home come Friday.”

HOW DOES THE SHORT WEEK COMPLICATE THINGS?

“The biggest thing is you won’t get the number of reps you normally get in preparation. We got a few in today. We will have to treat tomorrow like a Wednesday practice and Wednesday like a Thursday. I think the last thing our team needs right now is for me to go out and try to grind them and have a normal Tuesday, a normal Wednesday, and just skip by Thursday and have a Friday. I don’t think that’s what we need right now. We treated today like a Monday and we will treat tomorrow like a Wednesday and Wednesday like a Thursday. So, we will be short a practice, pretty much. That’s really the main difference, but it is a difference, for sure.”

YOUR CB ROTATION WAS SHORT, AS DABNEY HAS ENTERED THE TRANSFER PORTAL. WAS THAT A BIG LOSS LATE IN THE SEASON?

“Man, I want to tell you, Megginson and Haskins played their tails off, made plays on the ball, did really well. We’re thankful for how they have come on. Wish Dabney the best.”

“Jimmy’s ready. He’s ready to go anytime, love the way he’s handled his role. We’ll move Deon Biggins over there, not over there, he’s already been there but he’s been running on some scout team stuff. He will start working with that second group. Then, Kimani Donaldson, those five guys. We can always move Quinton Reese back there too, who’s been playing the nickel for us some. No, we will have somebody ready. Biggins is going to be a good one, just got to get him to learn what to do, but he’s going to be a good one.”

WHAT HAVE YOU SEEN FROM UMASS’ DEFENSE THROUGH THREE GAMES THAT MIGHT WORRY YOU?

“It’s still early on, but defensively they are playing a ton of man coverage which means they can load the box and try to stop the run. They can bring pressure. It’s going to come down to can we win some one on ones against their guys and they are definitely improved from last year’s team. Last year’s team they were a quarter’s team, but this year they got a new coordinator and it’s definitely different. Exactly how athletic and how good they are in coverage, it’s hard for me to tell just on the little film I’ve seen thus far. Our guys are going to have to win some on the outside.” 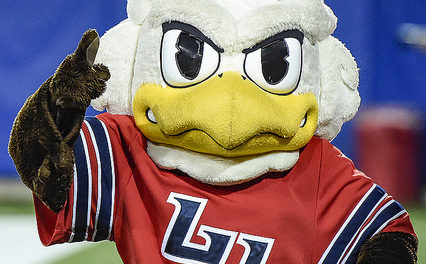