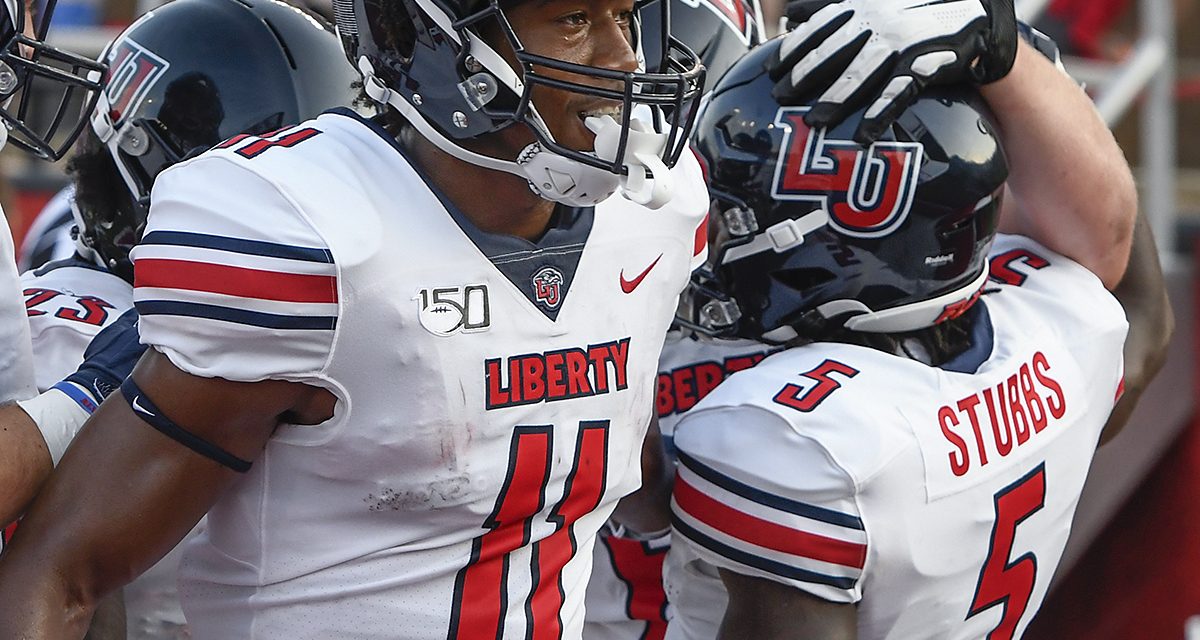 In a game that started with so much hope, the Liberty Flames were unable to slow down the Louisiana Ragin’ Cajuns, losing 35-14 on a hot and humid Saturday night in Lafayette, Louisiana.

Freeze again coached from the press box as he continues to recover from back spasms and a staph infection that required surgery during training camp. He flew separate from the team, not leaving Lynchburg until just prior to 4 p.m. Eastern for the 7:30 p.m. kickoff. He sat in a medical chair which was purchased by the University this week.

Following a season opening shutout loss to #22 Syracuse, all of the focus leading up to game two was on the offensive side of the ball. Liberty won the coin toss and elected receive the ball to open the game, unlike last week when the Flames won the toss and went on defense first.

Led by quarterback Buckshot Calvert, wide receiver Antonio Gandy-Golden, and running back Frankie Hickson, the Flames quickly marched down the field and put the first points of the season on the board on an end around shovel pass to D.J. Stubbs that went 12 yards for the score. The drive last 8 plays, 75 yards, and 4:06 and it looked like the week one offensive woes were a thing of the past.

Then Louisiana received the ball, and Liberty was unable to stop the Ragin’ Cajuns potent rushing attack all evening. Led by Trey Ragas’ 129 yards and Raymond Calais’ 111 yards, UL rushed for 407 yards as a team, as Liberty fans every where had nightmare flashbacks to a season ago.

UL had three first half missed field goals or the margin could have been much wider than the 21-14 score Liberty trailed by at intermission. The Flames’ 2nd score came when Frankie Hickson broke through the Louisiana defensive front and rumbled 66 yards for a touchdown, the longest of his career. Hickson finished with 133 rushing yards on the night and has now surpassed 2,000 rushing yards for his career. His score put the Flames back on top at 14-7 midway through the 2nd quarter, but that would be the end of the fireworks for Liberty as Louisiana would go on to score 28 unanswered points.

“We did some good things early on, but we became an undisciplined football team,” said Freeze. “I don’t mean that in a way of foolishness, but I mean it in a way of executing what you have to execute outside of that scheme. I just saw it over and over again and that is what kept occurring. Instead of it being third-and-two, it was third-and-10. If you look at our third-down conversions; that tells the real story.”

The Flames were 2-of-11 on 3rd downs and just 1-of 4 on 4th downs. Buckshot again missed reads and receivers on the evening, despite his healthy stat line of 21-of-37 passing for 212 yards while he had the 1 touchdown and 1 interception. 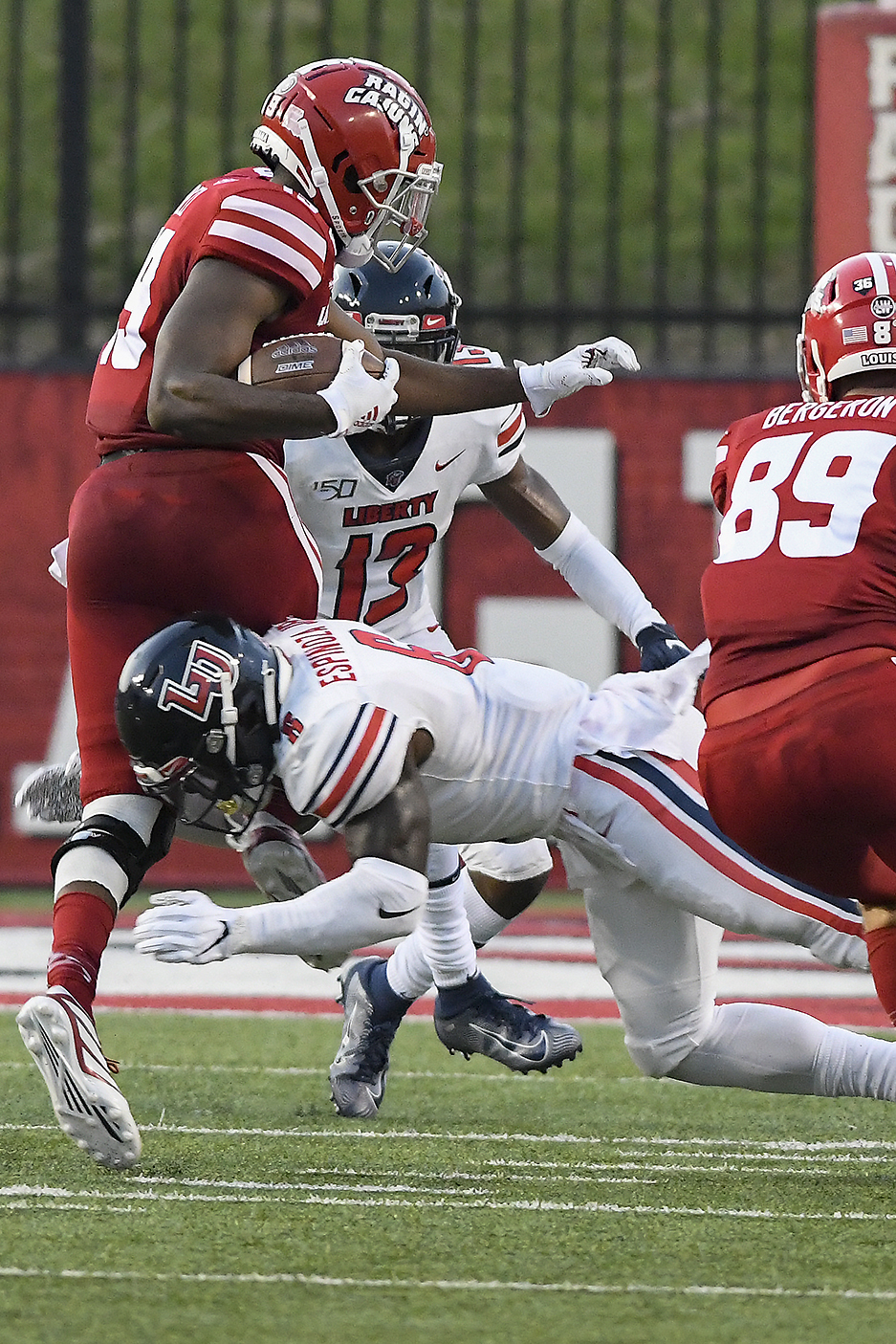 “Somewhere is a disconnect between Buckshot and some of the things we are doing offensively,” Freeze said of his 4th year starting senior quarterback. “Defensively, we have one or two guys that run something different than the other guys on the team, so we have to look at ourselves as coaches.”

Liberty only stopped the Ragin’ Cajuns on one drive, forcing a punt in the 4th quarter, their only punt of the game. In addition to their five touchdowns, Louisiana’s other drives ended on three missed field goals, two turnovers in the red zone, and a turnover on downs inside the one yard line with less than two minutes remaining in the game.

“I’m just disappointed that we are not more in tune with the game plan and I’m not used to that, but I haven’t been at practice for 20 days,” Freeze explained. “I know I can make a difference.”

The Flames have now lost 5 straight road games and will return to the friendly confines of Williams Stadium to take on the Buffalo Bulls who are coming off a 45-13 loss to #15 Penn State Saturday night. 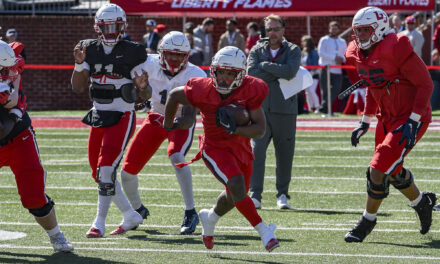 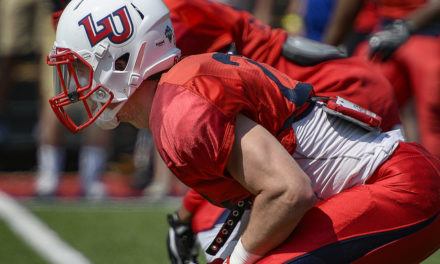 The Heat: This Isn’t A Purge