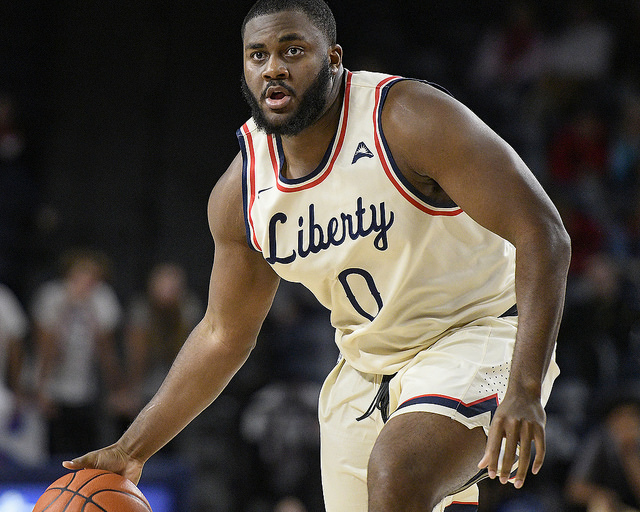 The Liberty Flames pulled out a tight 6 point win at home in front of a season-high crowd of 4,958 over North Florida.

In front of the largest crowd of the season, North Florida had no problem early adjusting to the environment. The Ospreys jumped ahead 3-0 on the opening possession  and controlled the first half tempo. UNF’s length bothered the Flames early as Liberty struggled to get open for any good looks. The Ospreys rotated in and out of a strong man-to-man and a matchup zone.

After leading by as many as 8 points, Liberty steadied itself and was able to trim the North Florida and take the lead, 26-24, on a three pointer by Elijah Cuffee with just over 5 minutes left in the first half.

UNF would go into the halftime break with a 3 point lead at 35-32 thanks to a 3-pointer by JT Escobar with 23 seconds left. Scottie James led Liberty with 8 points and 5 rebounds in the first 20 minutes. Myo Baxter-Bell provided a great spark off the bench in his 8 minutes of action, scoring 6 points, grabbing 2 rebounds, and dishing out 2 assists while making both of his field goals and both of his free throws.

Liberty struggled shooting from 3, connecting on just 1-of-9 from deep. The Flames entered the game shooting 39.7% from 3 for the season.

Liberty opened the 2nd half on a 9-2 run to grab a 4 point lead, but the Ospreys responded immediately, thanks primarily to Ivan Gandia-Rosa who knocked down a couple of 3 pointers. The two teams combined for 30 points in the first 5 minutes of the 2nd half as both offenses were blazing to open the period.

Both teams continued to trade buckets in a highly entertaining game. There were 18 ties and 15 lead changes at the media timeout with 10:44 left in the game.

Scottie James and Myo Baxter-Bell continue to provide an offensive punch for the Flames. McKay’s two big men combined for 28 points and 10 rebounds on 11-for-17 shooting from the field.

“Myo Baxter-Bell was great tonight,” McKay said about Myo’s performance. “He really provided a great lift for us. We had some adversity that we over came – Darius tweaked his ankle a little bit and I didn’t like the way we were moving offensively. I just think we overcame and got a hard fought victory.”

The game continued to go back and forth throughout the 2nd half, as neither team was able to pull away by more than 4 points. The Flames held on to the lead the majority of the stretch run, entering the final media timeout with a 2 point lead at 61-59 with 3:25 left.

Liberty’s defense clamped down in the closing minutes, as the Ospreys went over 5 minutes without a point. They didn’t score until the Flames were up by 8 with 21 seconds left. The Flames’ nearly held them the final 6 minutes without a field goal until Escobar hit a 3-pointer from the corner with 3 seconds remaining.

With the win Liberty moves into sole possession of first place in the ASUN at 5-0, as 4-0 Lipscomb did not play today. The Flames also move to 9-0 at the Vines Center this season.

“It was really good for our team to have to play in such a hard fought game,” McKay said. “I knew North Florida was good, and that they would present a challenge. In the previous games that we had a really good home court crowds with a lot of students, we haven’t been our best. I thought tonight, we weren’t quite at our best, but I think North Florida had a lot to do with it. And I think our fans had a lot to do with the outcome of the game.”

McKay to the fans: “thank you. They were fabulous. When I first got to UVA there was no one that came, and we started to win a little bit and we had guys that were easy to follow, they started coming more and more and more. I just think these are terrific young men, and we have a phenomenal student body and this is as good a University as there is the country. So, there’s reason to support the athletic teams, and I’m privileged to be a part of it.”

Liberty finished the game just 3-for-14 from 3, a season low, but the Flames finished with a 40-26 advantage in points in the paint.

Scottie led the team with 18 points and also had 6 rebounds. Homesley finished with 14 and 7. Myo rounded out the double figure scorers with 10.

Liberty has a quick turnaround and will face North Alabama Monday night. The Lions improved to 4-1 and are in 3rd place in the ASUN following their win over Stetson on a half-court buzzer beater to win the game. 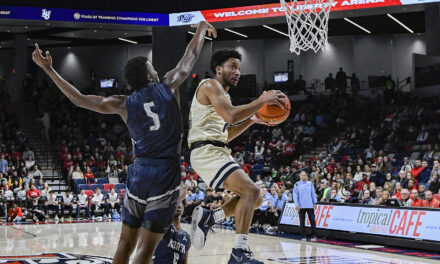 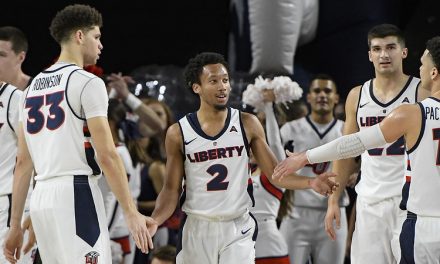 What We Learned: Iona