Liberty target Dominic Eldridge has announced he will be committing on “Cinco de Mayo”, Tuesday, May 5.

Eldridge recently named a top 3 of Liberty, Nevada, and Hawaii. He has a total of 11 offers, picking all of them up following his first season of playing football this past year. He is a 3-star prospect according to 247Sports.

He is a 6’5″, 300 pound offensive lineman who also touts offers from Kansas, Louisiana-Monroe, and several FCS schools.

Liberty has one commitment in the Class of 2021 as the Flames picked up an early pledge from offensive lineman Harrison Hayes.

Checking in on Kent State 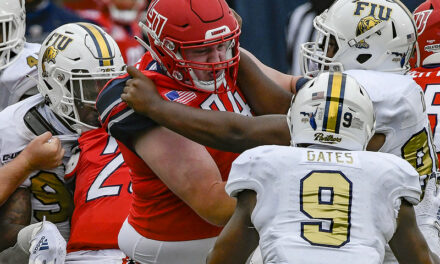 How to Watch or Listen to Liberty vs UNA