3 games in 5 days with 2 of them on the road? Not a problem for Coastal as they improved to 5-0 in conference play this week with wins over Longwood, Liberty, and Campbell. Shivaughn Wiggins scored 22 points in the win over Campbell on Monday night behind 8/13 shooting from the field. If the transfer from Mount St. Mary’s is able to provide Coach Cliff Ellis with a consistent 3rd scoring option behind Cameron and Gillis, then the Chanticleers become that much more dangerous.

The Panthers held serve at home this week with wins over Charleston Southern and Campbell. 3 different players scored 20+ points in the 2 games. John Brown and Devante Wallace each had 23 in the win over CSU while Lorenzo Cugini had 24 on 6/7 shooting from behind the arc against Campbell. Cugini’s 6 made 3’s were the only 3-pointers High Point made in the game.

Only one game for Asheville this week and they had little trouble with Big South doormat Liberty. UNCA won 71-54, a margin that would have been much larger if Andrew Rowsey could knock down a shot. Rowsey was 1/12 from 3-point range and 5/21 from the field against the Flames. We will find out a lot about this year’s Bulldogs over the next 2 weeks as three of their next 5 games are on the road and they face Winthrop, Campbell, Charleston Southern, Coastal Carolina, and High Point during that stretch.

Saah Nimley continues his stellar play against conference opponents. The senior guard is averaging 21 points, 6 assists, and 4.5 rebounds in CSU’s 4 Big South games. He’s also averaging 38 minutes per game in those 4 games, so we’ll see if he can keep up that level of production the rest of the way. The Buccaneers lost to High Point, 72-61, before beating Longwood, 68-54, this past week.

Gardner-Webb used 2 big comebacks to pick up a pair of tight wins this week. First, the Runnin’ Bulldogs overcame a 2nd half defecit of 14 against Radford and would eventually win in double overtime. Jerome Hill scored 26 points and grabbed 11 rebounds in the game. Then, GWU overcame a 16 point halftime deficit against Winthrop as Hill’s 3-point play with 17 seconds left in the game capped the comeback. Two big tests for Gardner-Webb this week as they face High Point and Coastal Carolina.

4 games into their Big South slate and Winthrop has played 2 overtime games and had 2 1-point games. In a pair of road games, the Eagles beat Presbyterian, 57-56, and fell to Gardner-Webb, 65-64. Winthrop led Gardner-Webb by 16 at halftime before the Runnin’ Bulldogs went on a 23-9 run early in the 2nd half. GWU finally tied the game with 1:43 left and took the lead with 17 seconds remaining.

Longwood had the beach trip this past week, losing to Coastal and Charleston Southern. The Lancers put up a pretty good fight against Coastal before falling, 76-70. Lotanna Nwogbo had a double-double with 23 points and 10 boards in the game. Nwogbo only played 14 minutes against CSU due to an injured hand, and Longwood struggled, losing 68-54, while only shooting 33% from the field and being outrebounded 41-29.

Another double overtime game for Radford, this time against Gardner-Webb. Just like against Longwood last week, the Highlanders would drop the double overtime game, this time 88-85. They led by 14 with 13 minutes to play, but behind a 19-6 run Gardner-Webb battled back. Radford picked up their first conference win over Presbyterian on Saturday, 95-82, behind Javonte Green’s 24 points and 9 rebounds. Green also had 28 points against Gardner-Webb.

3 straight losses for the Camels since opening Big South play with a win over Liberty. This week Campbell lost to High Point and Coastal Carolina. The Camels led most of the way against Coastal including a 14 point first half lead. Andrew Ryan missed what would have been a tying 3-pointer in the final seconds against the Chanticleers. Campbell will try to get back on track with 2 home games this week against Radford and Asheville.

The Blue Hose got back to their losing ways this week, falling at home to Winthrop and on the road to Radford. Murray led the Blue Hose against Winthrop in points, rebounds, assists, steals, and blocks. Impressive for anyone let a lone a freshman. Murray is averaging 19 points, 10 rebounds, and 1.7 blocks per game since returning to the lineup against Liberty after missing most of the nonconference portion of the schedule.

Just when you thought things couldn’t get any worse, the Flames lose starting point guard Joe Retic. Retic fractured his foot in the first half against UNC-Asheville, a game Liberty lost 71-54. In the first game without Retic, the Flames fell at home to Coastal Carolina, 69-54. LU has scored 60 points in just 4 of their 13 Division I games this season. 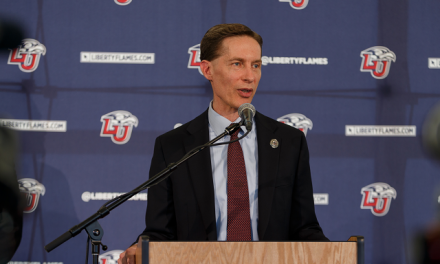