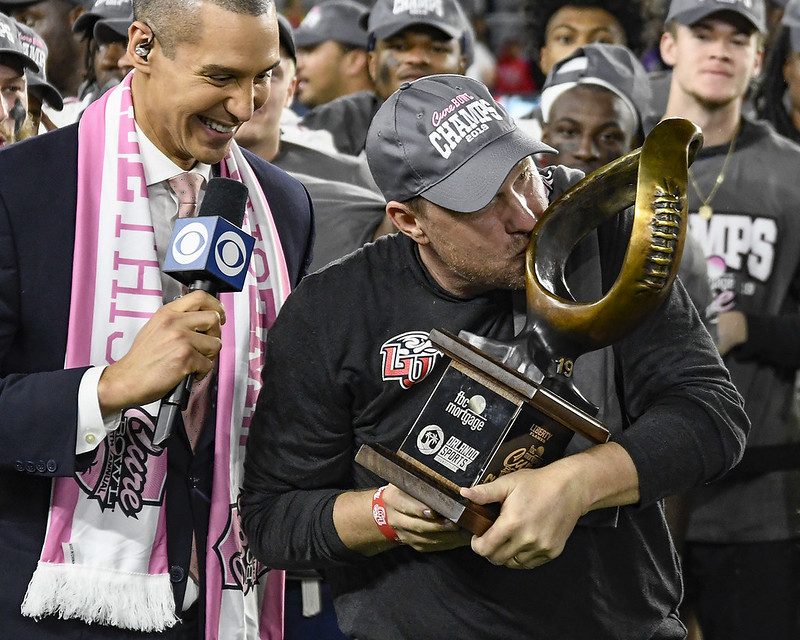 The Liberty Flames have seen tremendous growth across all of its sports over the past several years. Recording “firsts” or “best-evers” have become normal for a number of teams on campus. It was just a few year’s ago when thinking of the best Liberty team performance ever was a very short list. Now, that list is growing and one team took that best ever moniker to another level.

Here’s a look back at some of the best Liberty team performances on a national level in school history, in no particular order.

The best team finish for any Liberty athletic team in school history came from the field hockey team when the Lady Flames advanced to and played for a National Championship in the fall. Liberty would finish as the national runner-up, falling to Northwestern in the national championship game. The Lady Flames finished the year with a 20-3 overall record, 7-0 mark in the Big East, and won the Big East tournament championship. The Flames would defeat #11 St. Joe’s, #1 Rutgers, and #5 Maryland in the NCAA Tournament.

Riding the back of current assistant coach Katie Feenstra, the Liberty Lady Flames made an improbable run to the Sweet 16. Liberty was a #13 seed and knocked off #4 Penn State 78-70, and #5 DePaul 88-79. Feenstra averaged 25.5 points and 12 rebounds in the two victories. After the DePaul victory, Feenstra coined the phrase “Why not Liberty?” when asked why she chose to attend Liberty. The two wins in the 2005 NCAA Tournament, still stand as the only two NCAA Tournament wins in program history.

The Liberty golf program is arguably the best on campus and their first time making a splash on the national stage happened at the 2012 Men’s Golf National Championship. This came on the heels of the Flames winning the 2012 NCAA Greensboro Regional as the 6 seed. Liberty was paced by Chase Marinell’s +4 finish in the championship round and -3 finish by Robert Karlsson in the regional. Golf has since made the National Championship each of the past three seasons.

Liberty baseball has now advanced to the NCAA Regional Final twice, having done so in 2013 and a year ago. In 2013, the Flames defeated ACC power Clemson twice to advance to the regional final to take on 1-seed South Carolina. In 2021, Liberty defeated ACC champion Duke twice before falling to 1-seed Tennessee in the regional final as the Flames have now twice been one of the final 32 teams standing.

Under Dot Richardson, the Liberty softball program has become one of the best on the Mountain. In 2018 and 2021, the Lady Flames have advanced to the regional final. In 2018, the Lady Flames defeated Hofstra and South Carolina before falling to the Gamecocks twice in the regional final. Last year, Liberty knocked off Eastern Kentucky and Tennessee, eliminating each, before falling to eventual WCWS participant James Madison.

2019 Men’s Basketball advances to 2nd Round

For the first time in program history, the men’s basketball program won an NCAA Tournament game by defeating 5-seed Mississippi State in the first round in 2019 behind Caleb Homesley’s 30 points. The Flames would advance to the second round where the team would fall to Virginia Tech in a game Liberty held a lead at several points.

Behind second year football coach Hugh Freeze and Auburn transfer quarterback Malik Willis, the Liberty football team had the best season in school history and finished ranked No. 17 in the final Associated Press Top 25 poll. Liberty defeated their first ever ACC teams during the season, knocking off Syracuse and Virginia Tech, and then ending Coastal Carolina’s undefeated record in the Cure Bowl as the Flames finished the year at 10-1. 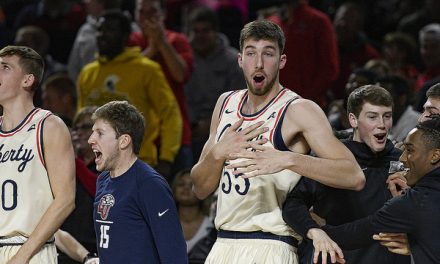