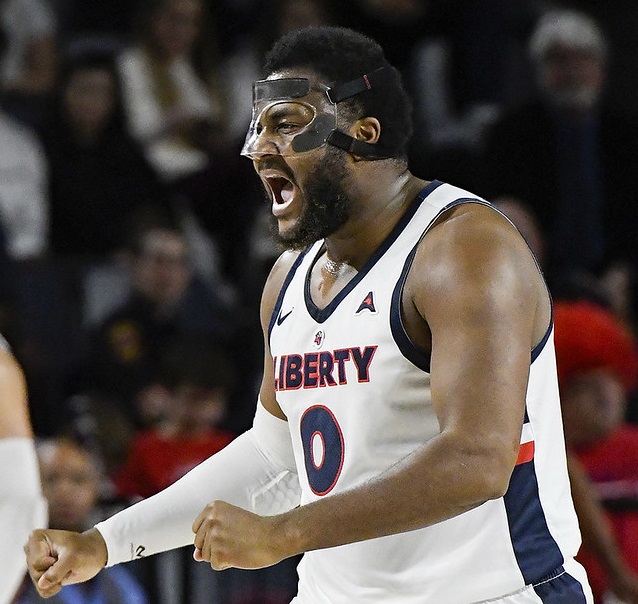 Liberty’s Myo Baxter-Bell led the team in scoring on Thursday evening with 16 points despite wearing a protective facemask.

He hurt his nose in practice on Thursday, but the mask didn’t appear to slow him down. Baxter-Bell scored 16 points while connecting on 5-of-7 field goals and 6-of-6 from the charity stripe. It’s the 2nd most point the redshirt-senior has scored this season, as he had 18 points in Liberty’s win at Vanderbilt in December.

“I think he’s good,” Liberty head coach Ritchie McKay said after the game. “I’m sure they will come up with a nickname for him, the masked man, because he had 16. I think he’s ok. Myo is tough. There’s been very few times over the course of 5 years, that I could even ever remember him missing more than a play. We had to hold him out (of practice) because it hurt. Proud of him for fighting through.”

He got injured during practice on Tuesday when he ran into someone’s shoulder. He was held out of any contact drills during Wednesday’s practice, as he was relegated to just shooting.

“It was bruised a little bit, I don’t think it’s broken,” Baxter-Bell said. “The mask is just precautionary so I don’t hit it again.”

Thursday was the first time he’s ever wore a facemask, wearing it for shootaround and then in the game. He’s not sure how long he will wear it.

“Honestly I have no clue,” he said. “I felt uncomfortable in it. I don’t know, it’s just more hoping I don’t get hit in the same spot again.”