As we tweeted last week, former Liberty guard Larry Taylor has decided to transfer to Rollins College. Rollins is a private, liberal arts college located in Winter Park, Florida which competes at the NCAA Division II level. Rollins had 6 Division I transfers on their roster this past season. In his only season with the Flames, the Englewood, Florida native saw playing time in 26 games where he averaged 4.9 minutes each game. Taylor totaled 12 points, 8 rebounds, and 12 assists during his freshman campaign.

He considered several other schools including Palm Beach Atlantic, Florida Southern, Tampa, Saint Leo, and even Florida Gulf Coast. Former FGCU head coach Andy Enfield recruited Taylor out of high school, but when Enfield took the job at USC interest on both sides waned. Taylor chose Rollins for several reasons including that he was “impressed with their coaching philosophy” and pointed out their “academics are top in the South” (referencing their recent #1 Regional University ranking in the South by US News).

When looking back on his lone season at Liberty, Taylor said winning the conference championship and advancing to the NCAA Tournament will be something he will “never forget.” He loved the satisfaction himself and his teammates got in “proving everyone wrong.” He said he would also greatly miss several of the friends he made off the court while at Liberty. Taylor mentioned one friend by name, Andy Smallwood, saying he was extremely thankful for Andy always “being there for me.” Smallwood, who is a master’s student at Liberty and acted as a mentor to Taylor, tried to encourage him to stay at Liberty. Once the decision was made to transfer, Smallwood hooked him up with a high school coach in Florida who connected him to Rollins.

So, with all the great memories, why did he choose to transfer? Taylor said he didn’t agree with the way the coaching staff related to the players, saying they were “kind of phony” and that they “played head games.” Larry says the coach/player relationship is very important to him, particularly with the head coach, and at the end of the day he “didn’t feel comfortable” at Liberty.

Ultimately, Larry believes “God has a reason for everything”, and he is anxious to begin the next chapter in his life. 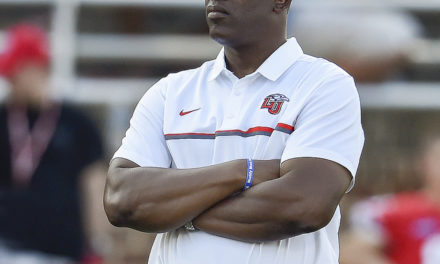 What the Maxwell & Atencia Transfers Mean