It’s always refreshing to see the excitement level of the players during spring practices, and this year the excitement seemed even more amplified. Coming off Liberty’s first ever playoff appearance, players were anxious to begin work that will hopefully end in another successful run in 2015. Here’s what stuck out to us in Liberty’s inaugural spring practice:

Nick Newman will be leading a group of inexperienced linebackers in 2015.

-Players should have plenty of opportunities to prove themselves in the coming weeks, as there was quite a bit of fluctuation in the first string. A number of guys had chances to rotate in and play alongside the usual starters.

-He got a lot of first team reps and is a good athlete with good size.

-This will be one of the most talented backfields in Liberty football history.

-It’s pretty tough to see how these guys stack up when they are matched against some of the best wide-outs in the nation, but Holloway and Scott seemed to be getting the most first team reps.

-Coach Gill told us Bradwell is suspended due to a violation of team policy. The severity of Bradwell’s offense is unknown, but if the suspension carries over into the fall, this would be a major blow to the Flames. Encountering any poor luck with injuries at quarterback could be devastating with Woodrum and Masha as the only real options, and Bo Swanson as strictly a scout team guy thus far in his career. Hopefully the issue will be resolved by then, but nonetheless, the freshman quarterback is missing out on valuable practice time.

We’ll have plenty more in the coming weeks, so be on the lookout as we continue our coverage of spring practice. 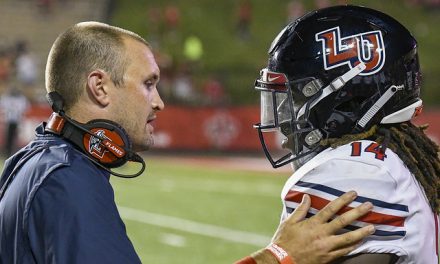 Liberty in the mix for 3-star DE from North Carolina