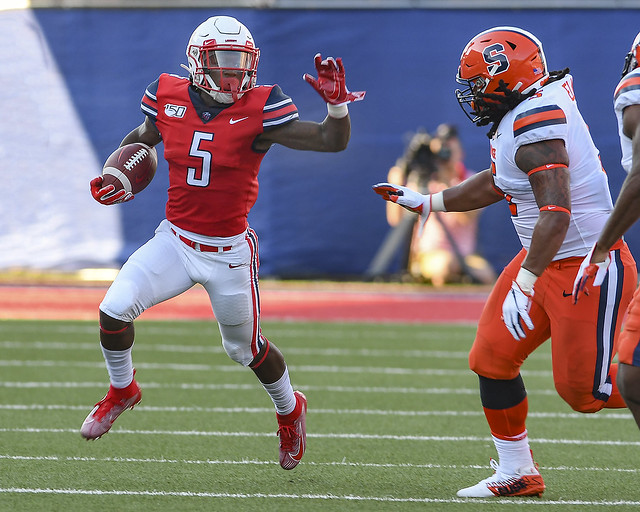 We’re pleased to be joined this week by Tim Riordan of UB Bull Run, home of Buffalo Bulls coverage on the SB Nation Network as we preview this weekend’s game.

1. What are the expectations for the Bulls this season? With all the roster turnover from a very successful 2018 season, I thought Buffalo would be down a bit this year. It looked like UB held its own against Penn State though.

The coaching staff has been very high on this years team, saying it’s “position for position” the most athletic team that they have ever put on the field.

That being said we lost a lot of very good players. Buffalo only returned eight starters this year, four of them were on the offensive line, three on defense, and the other was our running back tandem. An entirely new corps of receivers, new tight end, new QB and on the defensive side of the ball every “unit” only had one returning starter.

The coaching staff had not even named a quarterback until a few days before the season started.

The other Bull Run editors and I all saw the season as falling somewhere between 5 and 7 wins. 7 wins if UB got the right bounces and five being the more conservative number. I was a bit “Bullish” and picked seven wins because the offensive line and running backs do have the talent to make this a competitive team in most of their games.

2. For those of us that didn’t watch the entire Penn State game, how close were the Bulls to pulling off the upset? It seemed to be very close into the 3rd quarter.

Buffalo was the better team in the first half. They were not up on a freak play but had owned the line, run the ball wall, and shut down Penn State’s offense.

Even early in the third, when Penn State surged to the lead, Buffalo looked like they had what it took to keep themselves in the game until Myers threw a pick six which started the process of the wheels coming off.

The UB defense had no answer for Penn State in the second half and the offense could move the ball a bit, but made those key mistakes you simply cannot make if you want to beat a top 25 team.

All of this being said, I’m a lot more pleased coming out of that game than I expected I would be. I don’t think Penn State was giving us their best in the first half but I do think the Bulls proved quite a bit about their ability to run the ball, and about the ability of freshman Matt Myers going forward.

3. It appears that UB runs a platoon at running back between Jaret Patterson and Kevin Marks. What should we expect out of that duo?

These guys came out of nowhere last season to dethrone a deep set of backs. Buffalo already had an established lineup that nearly everyone expected to be “the guys” in 2018 and we were all excited about it.

Emmanuel Reed, Theo Anderson, and Johnathan Hawkins were the guys we thought would battle for the job. They were the top three running backs of 2017 but the freshman duo of Patterson and Marks proved so dominant that two of the three have transferred out.

Marks and Patterson compliment each other, having very different styles. The coaching staff occasionally will pick a player for a situation but more often than not the player in the game is more there to the other can rest.

Expect a big dose of carries from each of them.

4. Redshirt-Freshman Matt Myers has stepped in for Tyree Jackson who left early for the NFL Draft. How effective has he been so far and what should we expect out of him on Saturday?

As fans this was easily our biggest concern coming into the year. Tyree left early to take his shot at the NFL and we had Vantrease (his backup), Dominic Johnson (a dual sport athlete), and some freshman named Myers.

As the season approached no starter was named. It was not until his sister tweeted he would be starting against Robert Morris to start the season that anyone outside of the coaching staff had an honest idea about who would be behind center. Then in that game Myers only threw the ball 10 times, with mixed results.

So going into Penn State we were quite worried. The kid made a few freshman mistakes, and needs to work a bit on his chemistry with Antonio Nunn, but on the whole he had a very decent showing making us think that this staff knew all along what they were going to do but wanted to keep it quiet.

He has a nice quick release and throws tight passes, not a laser like Tyree but they get in there with a little bit of pop. He has decent field vision but so far is showing the two mistakes you expect out of a freshman. He occasionally stares down routes and his deep ball has carried a bit further than the receiver.

5. Who should we watch out for on defense?

The “other” Patterson. Jarrett, like his brother, popped onto the scene last year displacing an established starter. He leads the linebacker corps and arguably the defense.

Right now I’m looking at a UB 31, Liberty 17 game but I’m not set on that yet. This is a game Buffalo *MUST* win if they want to be at the 7-8 win threshold which would be a huge win for a team that lost so much.

If you like pop by our weekly pick’em contest to see how other UB fans feel, and maybe put in your own picks. 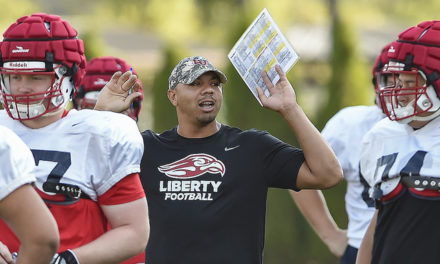