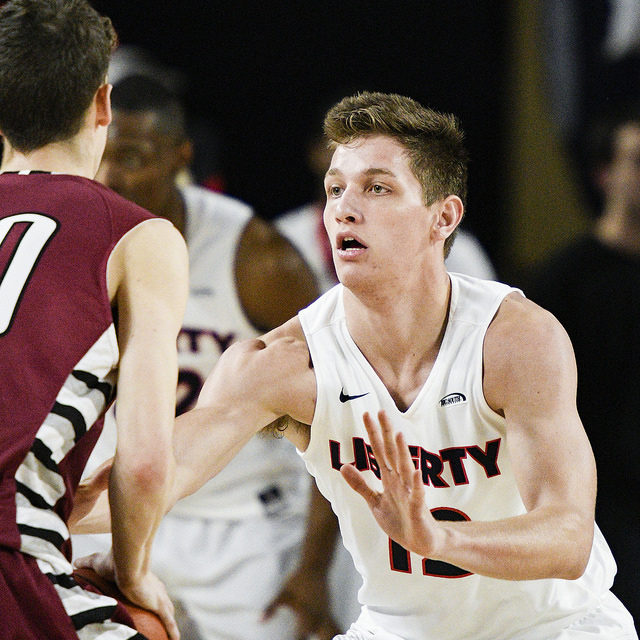 The Aviation Department. It’s one of the primary reasons freshman Brock Gardner is at Liberty.

The 6-foot-7, 210-pound freshman from Chandler, Arizona grew up flying remote-control airplanes with his dad and wanted to major in Aviation. Liberty is one of just a handful of Division I basketball programs that also have Aviation programs. Coupled with the Christian aspect of the University and the coaches, he says Liberty was a perfect fit for him.

Coach McKay first saw Brock in an event in the spring of 2016 in Pittsburgh. “It was funny,” McKay recalled. “I was at a game to watch another kid play, and noticed that Brock was playing in the same game. I was captivated by Brock’s play. He went from on our radar to the top of our list in one game.”

McKay made Gardner’s recruitment a point of emphasis since watching him in Pittsburgh. He was the lead recruiter for him, not usual for a head coach. The Flames coaching staff saw a young athlete who, at his size, could play multiple positions, both on the perimeter and down low. 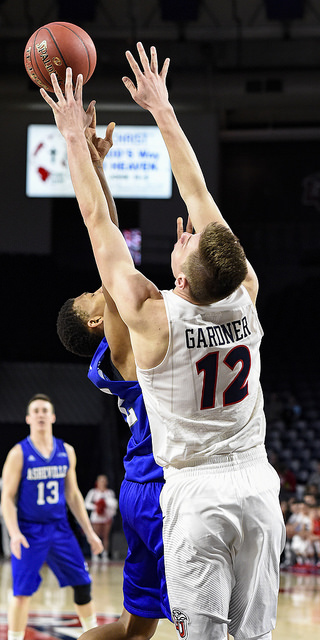 “We were sitting there looking and were like. ‘OK, this is a 6’6″ guy that’s handling the ball and shooting 3s and being able to defend on the perimeter.” – Coach Getter on Brock’s recruitment

On the basketball court, he’s still growing into his potential. He comes from a small Christian high school in Arizona, and the adjustment to the Packline defense and Division I college basketball has been daunting. As he gets more playing time, more time in the weight room, and more experience, assistant coach Kyle Getter says, “He will become more acclimated to playing against better competition.”

“I think he’s just scratching the surface,” Coach McKay said of his potential. Coach Getter tied it back to Brock’s love for Aviation, “I think the sky is the limit.”

We had the opportunity for this Q&A with Brock, who’s currently averaging 6.2 points and 3.2 rebounds per game for the 15-10 Flames.

When did you first hear about Liberty?

I originally heard about it from the old coaching staff, Coach Layer. He came to my high school. He originally started recruiting me, and he gave me the offer. Then, shortly after that, the coaching change happened with Coach McKay taking over. He continued the offer, and, out of all the coaches that were recruiting me, he was almost at every game. That was huge for the recruiting process. That’s how I heard about Liberty, and what brought me here is there’s like 17 Division I schools that have an Aviation program. So, the options were limited in that aspect. I loved the coaching staff. They were dedicated to me and focused, that was huge. The Christian University, the Aviation program, the coaches, it was all a perfect fit.

How much did it mean to have the head coach make you a priority in the recruiting process?

It meant a lot. Coming from high school to college, one thing you struggle with is confidence. Playing with guys who have played college for 2, 3, 4 years, and they have a lot of experience. To have a coach – that has that confidence in you and that trust in you – it puts a little bit of pressure on you to keep working hard because you’ve got to live up to that standard that coach has for you, but to also have the comfort that he has confidence in you, that is huge.

What were some of the other schools that were interested in you and you considered other than Liberty?

Central Arkansas was up there. Air Force. I took 2 visits, 1 to Air Force and 1 to Liberty. Those were probably the 2 biggest ones. Also, I talked to TCU a little bit, they didn’t offer, but I did have contact with them quite a bit. Cal Davis, they offered. Those were probably the biggest, but there were a couple others like Columbia. There were a couple options, but Liberty just had the perfect fit. 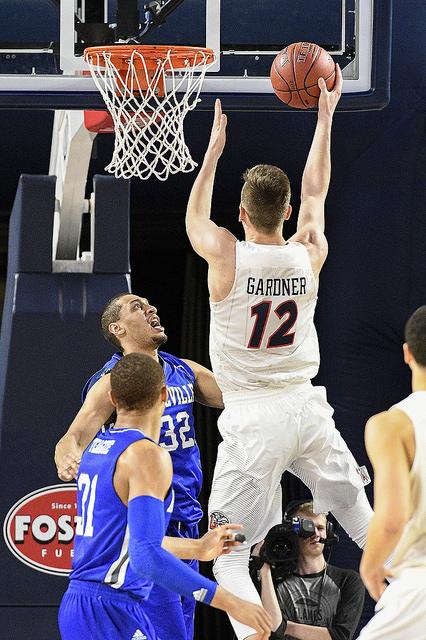 “He just kept coming to work every day, and then his opportunity came and he made the most of it.” – Coach Getter on Brock’s freshman season

What’s been the biggest adjustment or difference from high school to Division I basketball for you?

The intensity and athleticism. Every DI game is going to be a hard battle, nothing comes easy. Whether it’s in practice, the weight room, the game, you’re constantly working hard. Things you can do in high school, you can’t do in a college game just because of the athleticism and the development of the other guys. It’s hard to play your game, and I had to adjust to that. You have to keep getting better. You have to improve every day on your craft.

As a freshman, how difficult is it to learn the Packline?

It was a struggle. First getting here, I didn’t know what I was doing. The first couple of practices were really hard. You have to be very coach-able because it’s a whole different system than what I’ve been taught. It’s coming along very well. People watching from home say, ‘Brock, your defense has gotten a lot better.’ So, that’s been cool to see. It was definitely a big adjustment at first.

How is it playing for Coach McKay?

It’s awesome. The way he does things, his routine, the way he coaches us guys, the relationship he has with us, you really can’t find it anywhere else. For him to show the love that he has for us, but also the discipline that he coaches us with, is hard to find. It’s not just with him, it’s with the assistant coaches too. You have Coach McKay, and then you have all the other coaches that back him up.

What’s your favorite thing so far about college life?

Away from basketball, what’s a talent, hobby, or interest that you have?

Growing up, my dad and I always flew remote-control airplanes, that’s where the Aviation desire came from. My hobby is eating. I like to eat a lot of food.

I’d have to go with pasta.

This Picture Sums Up Liberty’s Season