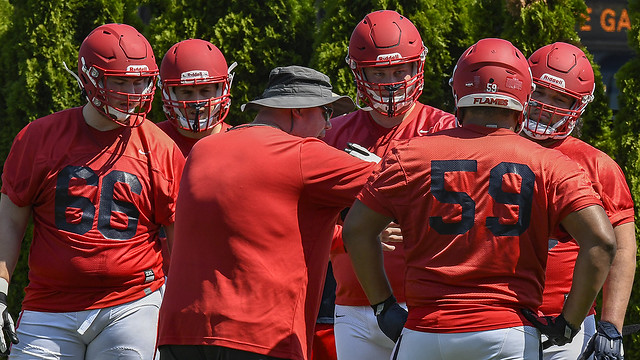 We move on to the offensive side of the ball today with our position previews after taking a look at the defensive positions earlier this week.

The offensive line unit is one of the most experienced position groups on the team. The Flames return five linemen who have made at least one start during their career, combining for a total of 95 starts between them. Add in a quality group of redshirt-freshmen and an experienced JUCO transfer, and new offensive line coach Sam Gregg expects his unit to have a solid 2019 season.

It’s hard to believe Schultz is already a junior. He came to Liberty after playing a season at Fork Union Military Academy after starring at Culver Community High School in Culver, Indiana where he earned all-conference and team MVP honors as a senior. He’s seen playing time in 21 games during his first two seasons with the Flames, including 10 starts last season, all at right tackle. He now makes the move to Buckshot’s blindside at left tackle.

OL Coach Sam Gregg – “He’s pretty sharp upstairs. He does a really good job. We’re still working through some technique-stuff with him, but he’s hitting it full speed. He is our best pass protector, and, hopefully, we can keep that going and get him better and better before we play in the Syracuse game.”

It was a surprise to see Bounds working with the first team when training camp opened. Not that he doesn’t have talent, but it was expected that Ethan Crawford would be slotted in at left guard, and if anyone had beaten him out it would have been one of the redshirt-freshmen. Bounds has played in 19 games in his career as a reserve and spent last year as the team’s backup center. So far, he’s continue to hold off his competition for first team.

Sargeant has started 23 straight games at center for the Flames, and he was able to overcome a strong push by John Kourtis for the starting spot in the spring.

OL Coach Sam Gregg – “He’s running the show out there. He knows the plays, he’s getting the guys going in the right direction. He’s been in the fire before. I’m proud of him. He had an unbelievable summer with Dom, and he felt a little heat in the spring from some guys and came through. He has worked his tail off to be ready for this season, and I’m so proud of him.”

Duff has started all 34 games of his career and is the unquestioned leader of the unit.

OL Coach Sam Gregg – “He’s an eloquent kid. Man, he is such an awesome kid. He is to the point, he is not a lot of playing around. When he says something, they listen. It makes my job really easy. If I want a point to be banged home, he’s got no problem coming in right behind me and making sure it’s done the way Coach Freeze wants it or the way I want it.” 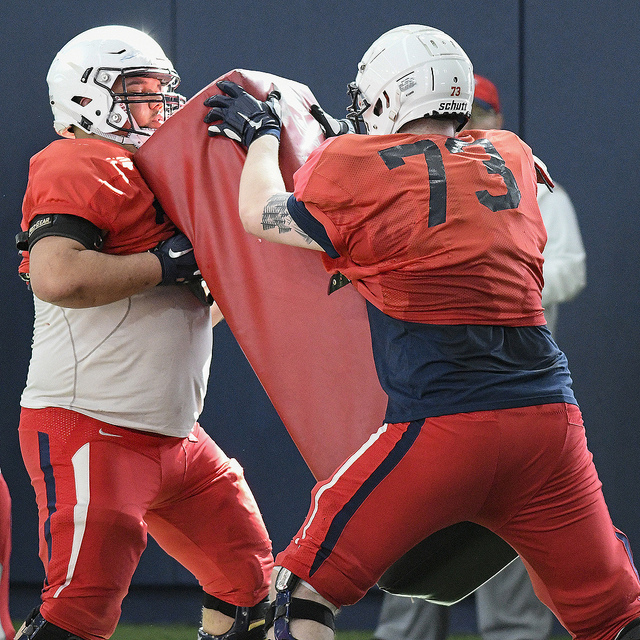 Isaacson is very experienced at right tackle. The LCA product has seen playing time in 30 games while making 10 starts over his career. He’s currently slated as the starter at right tackle.

Graham was one of five offensive linemen that were part of the 2018 signing class, all having redshirted last season. The majority of that group will now make up the unit’s 2nd team, including Graham who is vying for a backup tackle spot.

OL Coach Sam Gregg – “Jon had an injury when he first got here, and he’s working through that. Jon has dropped a lot of weight. He’s going to be able to, hopefully, contribute this year. I don’t see why he couldn’t. I was a little worried about that in the spring. He’s really come on and he’s going to push (the starters).”

McCaw (no relation to Liberty’s AD) is also in the mix for playing time at tackle. He played in all 12 games as a backup at left tackle last year following a redshirt 2017 season. He’s from Grapevine Faith High School in the Dallas, Texas area, the same high school that produced true freshman linebacker Malik Caper.

A JUCO transfer from Ventura College, Knight is expected to fight for significant playing time at a tackle spot, and he may even push for a starting position before the season is over.

OL Coach Sam Gregg – “Maisen’s the new guy in town. He’s learning, he’s getting the playbook down, and I’m really excited to see what he can do.”

Bodden is another one of the redshirt-freshmen class that will push for playing time this season. He was a benefactor of the new redshirt rule as he played against Auburn and Norfolk State last season but was still able to maintain that year of eligibility.

OL Coach Sam Gregg – “He has lost a good bit of weight since the spring, and he’s come on. I’m excited to see what he brings out on the field.”

Another redshirt-freshman, Schlittler saw playing time in the season opener against Old Dominion. He’s originally from Missouri and will be in the mix for playing time at guard or even at tackle. 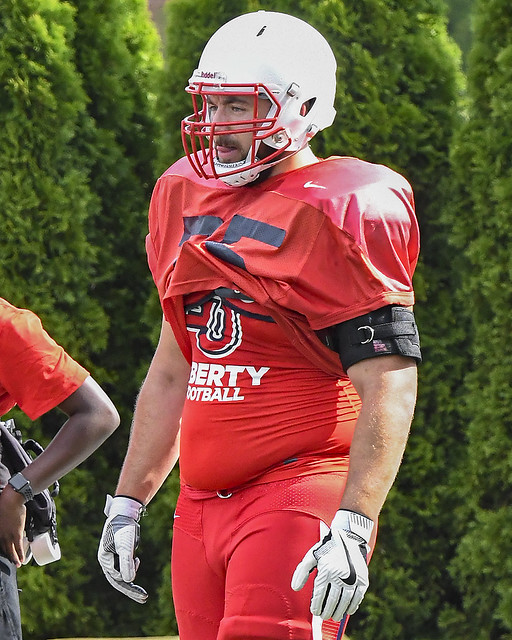 Kourtis saw playing time against Old Dominion and Norfolk State last year before redshirting. He’s from Toronto and played for one of the best prep football teams in Canada, Canada Prep Academy. He spent most of his time before college at tight end and defensive end before making the switch to center. The coaching staff is really high on Kourtis as he pushed Sargeant hard in the spring.

OL Coach Sam Gregg – “I think John is going to be an excellent center one day.”

Crawford has significant experience and most expected he would be penciled in as a starter at left guard, but an injury in the spring set him back. He’s made 18 starts in his career and has been moved to a center/guard role for his senior year. Coach Gregg likes to have three centers available for all games and that’s where Crawford will likely fit in. He could also slide in at either guard spot without much of a transition.

OL Coach Sam Gregg – “Ethan is definitely a veteran. He is definitely going to help us. He’s really a great hand to have. He’s playing a lot of guard for us now, he’s going to play center too, just football smart. He’s going to be a coach. It’s important to him. He is just an awesome young man. It’s a tough situation – the first day we come out here running, he hurt his foot, which is awful. You got a new coaching staff and you want them to think good of you, then that happened to him. He’s battled back, he’s done a lot of work on his body. He’s dropped some weight. He’s looking good. He’s moving well. Man, he is great to plug in there and help.”

The last of the five redshirt-freshmen on the O-Line. Chibueze was one of the highest rated recruits the Flames signed in 2018, a three-star prospect with offers from East Carolina, North Carolina, Temple, and Virginia. It’s been a little bit longer of an adjustment for him to the college game than most anticipated. He’s working as a guard right now.

OL Coach Sam Gregg – “Henry is going to be a really good player. His progress from spring ball from where things were moving a little too fast for him to now… he’s super strong and super athletic. He’s going to be a good player. He’s going to be really good. He’s a people mover for sure, that’s what we like to have. He’s explosive with his hips. He could stand to lose a little weight, and he’s working on that. He’s working on his strength and his weight. He’s so naturally powerful through his hips. I think he’s right there ready to turn that corner and be somebody that’s pushing to help us.” 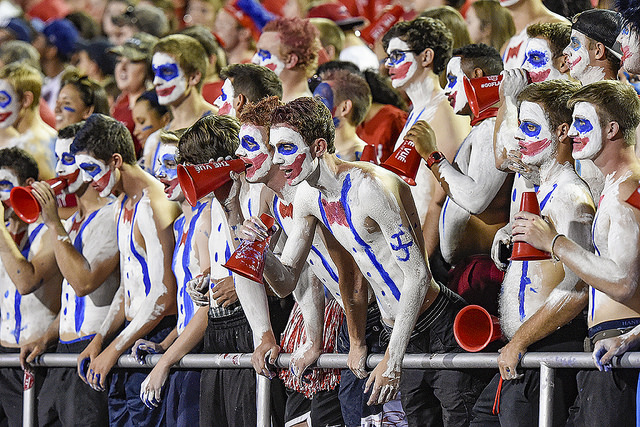 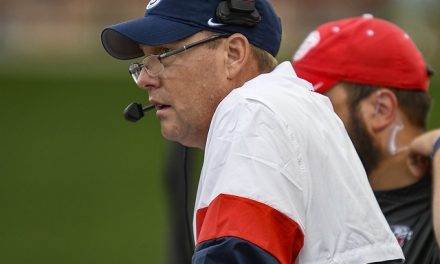 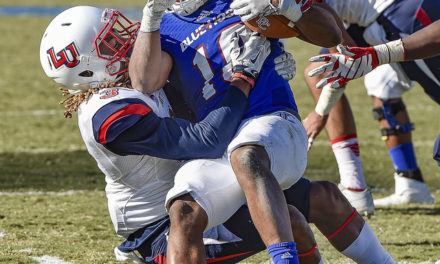