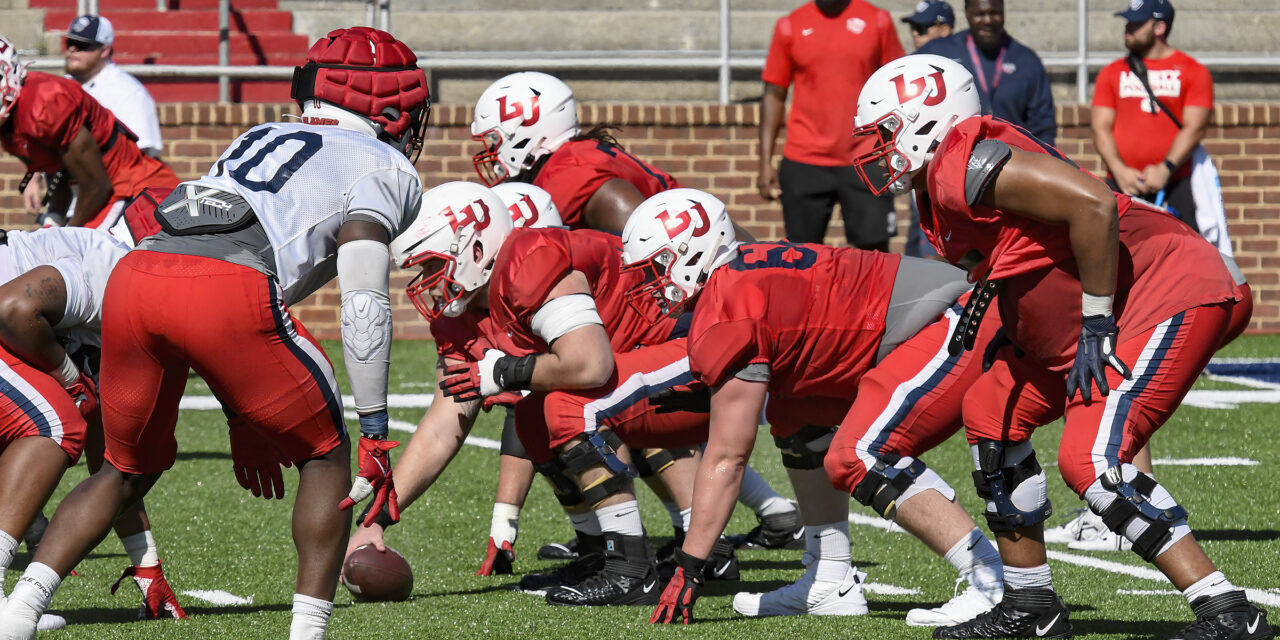 Our position previews conclude today with a look at hte offensive line. If you have missed any of our previous previews, you can access them here:
Defensive Line
Linebackers
Safeties
Corners
Special Teams
Tight Ends
Wide Receivers
Quarterbacks
Running backs

Liberty’s offensive line has a much different look and feel this year. The story has been told of the sacks allowed by the unit and 2021 and some of the other struggles of the unit. Coach Freeze brought in a new offensive line coach in Chris Klenakis and several new transfers to help bolster the line.

Despite the changes, three starters return and several depth pieces from last year’s squad, providing a strong foundation for Coach K to build from.

Offensive line coach Chris Klenakis – “What’s been really nice is the competition. Really, from one group to the other, there is not much separation. It’s not like you got big gaps between guys in the position, which is great because you can interchange, you can look at different combinations. It has really helped our competition.”

“I feel real comfortable with probably eight right now, but we’re working to add to that number a couple of guys that are right on the bubble that could pop in there.”

Watkins is one of those key transfers that has come into the program and help give it a different look. Coming in from Kentucky, he was a part of the offensive line rotation for the Wildcats in the SEC before a knee injury derailed his career. He seems to have the injury in his rear view and is now ready to stake claim as Liberty’s starting left tackle.

Offensive line coach Chris Klenakis – “He’s seen the things. When you get a certain look, or certain alignments, he has seen it before. He understands when you teach it, explain it to him, it registers. He’s seen it. As an O-Line, you can draw it on the board, you can walk-through it, but until you’ve done things full speed and created muscle memory and trained your eyes to adjust to that muscle memory. You need that rep base. It’s all about rep base. The more rep base you have in certain situations, you’ve trained your eyes and your muscle memory.”

Bodden has done his best to keep his starting spot with Tulsa transfer X’Zauvea Gadlin right on his heels. It appears as though Bodden will be able to maintain the starting job, but, regardless, he is a key part of the Liberty offensive line and has plenty of experience.

Offensive line coach Chris Klenakis – “He’s steady. He’s been in the system. He’s been in the fire. He doesn’t get rattled when you get a new look that maybe you haven’t seen on film, he recognizes it. He’s been down the road with it. He’s another quiet leader. He’s not going to say much. He goes to work. He’s a good and steady worker. He’s a good leader as well.”

Cam Reddy will attempt to slide in and take over for five-year starter at center Thomas Sargeant. He began his collegiate career at Boston College before transferring to Colorado State where he was their starter the past couple of years. He brings that experience to Liberty and will help bridge the gap for the Flames from Sargeant to the next starting center.

Offensive line coach Chris Klenakis – “Cam and John Kourtis have done a good job. They’re both veteran kids. They’re both very smart. They set our protections. They set our run game. They’ve got what we call good FBI – football intelligence. They are the same guy. They are competitive. They are overachieving guys. It’s a good feeling to know that you’ve got two centers in there that are very reliable.”

After seeing playing time as a backup at right guard, Schlittler took over in 2020 as the Flames’ starting right guard. He was named VaSID All-State second team and Phil Steele Postseason All-Independent second team following the year. Now, he’s a veteran and one of the team leaders as well as one of the top offensive linemen on the team.

Offensive line coach Chris Klenakis – “He’s steady. He’s a very, very intelligent young man. He’s a great leader. He’s very serious about football. When he gets here, he comes to work. He’s got a lunch pail mentality. He’s come to work. He’s going to give you a full’s day work. You’re going to help your younger guys develop. You’re going to coach them up. He takes some things off my plate with the younger guys about how we do drills, hustle from here to there. We don’t want a coach telling you to hustle. It’s a positive having a young man who has been down the road. He provides great leadership for us.”

Gadlin has impressed the coaching staff this summer and in camp. He can play any position on the offensive line and will likely get the chance to do just that at times during the season. He is likely to begin the season as the starter at right tackle, but he could also easily slide over to left guard or any other position on the line if needed due to injury or performance at those spots.

Offensive line coach Chris Klenakis – “The versatility. He has played all five positions in a Division I game. He gives you that versatility that you can always have your best lineup on the field. Sometimes if someone gets dinged up and maybe their backup is your 8th or 9th best O-Lineman, you’re really not putting your best unit on the field when you bring in the substitute. X’Zauvea gives you the luxury. He can slide into that position if maybe the next best player is a guard or a tackle. He keeps your depth better.”

Over the past couple of seasons, McCaw has turned himself into one of the top offensive linemen on the team as he has been the starter at right tackle. An injury that required shoulder surgery in the spring set him back entering the new year with a new offensive line coach. He will still be firmly part of the rotation on the offensive line and can really be viewed as the sixth starter of the unit. He has been working at both left and right tackle and can slide in to help out as needed.

Offensive line coach Chris Klenakis – “Cooper is in the mix. He gives you that ability to play both sides, right and left. He’s a guy that has that rep base. He’s like Naasir. He’s got a rep base. He’s seen things. He’s been down the road. What really helps him out is he’s already been in the system, been in this offense. He understands it. He’s played with Brendan in there. He’s played with Jacob. There’s a good chemistry. He’s a very solid leader too. He’s a quiet leader, but he’s a good leader. He’s really a good example for younger guys to watch because he works hard, practices hard. He doesn’t talk much, he just plays hard and lets his example speak for it. I’m excited to have him back. He was a wild card to me because he wasn’t here in the spring. It’s been a good thing.”

JUCO transfer Reggie Young was working with the first team during much of the spring and into the beginning of camp at tackle. He had a setback early in camp and has been fighting to get back in the mix. He will have his opportunities at times this season and provides great depth for the Flames.

Offensive line coach Chris Klenakis – “Reggie is in the mix. He’s been working hard. He had a little setback early in camp, but now he’s back going again. We’ve just got to get him caught up.”

Kourtis has been the backup to Sargeant at center the past few seasons. Once Reddy transferred in, the coaching staff flirted with moving Kourtis to guard, but ended up sticking with him at center.

Offensive line coach Chris Klenakis – “Cam and John Kourtis have done a good job. They’re both veteran kids. They’re both very smart. They set our protections. They set our run game. They’ve got what we call good FBI – football intelligence. They are the same guy. They are competitive. They are overachieving guys. It’s a good feeling to know that you’ve got two centers in there that are very reliable.”

Graham has seen significant playing time the last couple of years, and he can be counted on again this season if needed due to injury. He’s spent the early part of his career at both tackle and guard and could play either spot.

Buchanan has been working with the second unit at left guard, and he could certainly force his way into the rotation as the season wears on.

Mitchell has seen some playing time the past couple of years, and he is in the mix to push for playing time again this season.

Hayes broke into the lineup as a true freshman some last year, and he again is someone that could help provide depth. 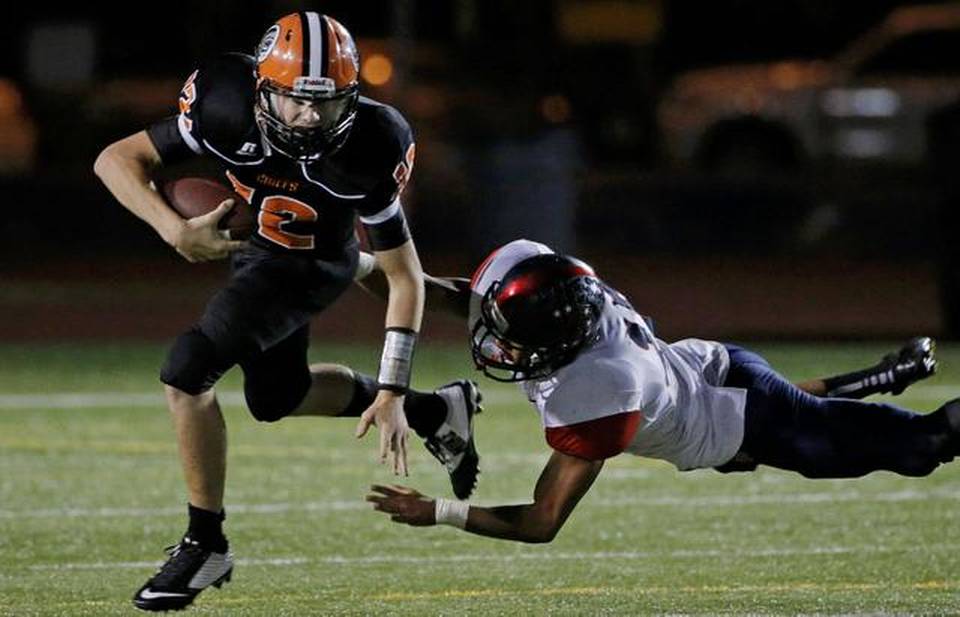 Liberty picks up a commitment from WR Kameran Shanks