After a season ending injury in 2012, Kevin Fogg was made available for the 2013 season, giving the Flames a huge boost to an already stout defense. The fifth year senior has already jumped back into his old play-making habits, tallying the second most all-purpose yards against Monmouth on this two interception performance, along with some very nice tackles against Morgan-State this past weekend.

into Richmond to face his former coach of three years.

“Yes, it’s going to be emotional, but at the same time it’s going to be a football game. You can’t let emotions get in the way of how you prepare,” he told us Tuesday afternoon. “That just plays with your mind on game day, we’ve got to go in focused, and take it one game at a time, it’s just another game on our schedule, it happens to be our ex-coach, but we still have to take care of business.”

It sounded like Kevin was pretty excited to be back to work with such an experienced defense in 2013, “It’s awesome, you don’t have to get on people because they already know the expectations. We like to have fun and joke around a lot, but we all know when to take care of business. I love it, I’m excited to be a part of it”

In regards to Fogg’s personal goals for this season, he revealed that he didn’t really have any. “I just want to be that leader for the team. I want to do well, but whatever I do is not for myself, it’s to glorify God, and do that through how I play.” Despite being the smallest guy on the field often times, it is evident that the team looks to Fogg as a leader. He is looked up to, not only because he is a dominant player, but also because of the way he approaches the game.

We asked him what they have been working on to prepare for the Richmond offense. He told us the coaches have put an emphasis on bringing pressure and technique for this contest. He also said that he wants some chances to make plays, “I just want to be in the right position. I love being close to the ball, I love trying to get my hands on the ball, I love trying to make a big play.” Fogg joked that he doesn’t get enough action, “Usually most of the stuff goes to the boundary to Walt’s (Aikens) side, so it’s good when I finally get some action.”

Lastly I wanted to know about this “Fogg Island” I had heard about, and believe it or not, it isn’t as luxurious as it sounds. Kevin told us he limits all incoming resources, “whatever they have, it’s going to run out.” Fogg has habitually put opponents on this figurative wasteland this season, where they are unproductive to the offense.

Also, check out this interview with Kevin as he discusses this season and his mixed emotions in playing against coach Rocco:

It was great hearing from the veteran as we approach one of the highest anticipated Liberty games of the past few years. We wish Kevin the best of luck in his senior season. 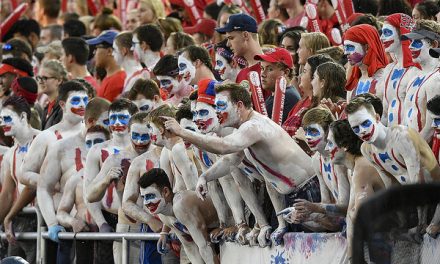