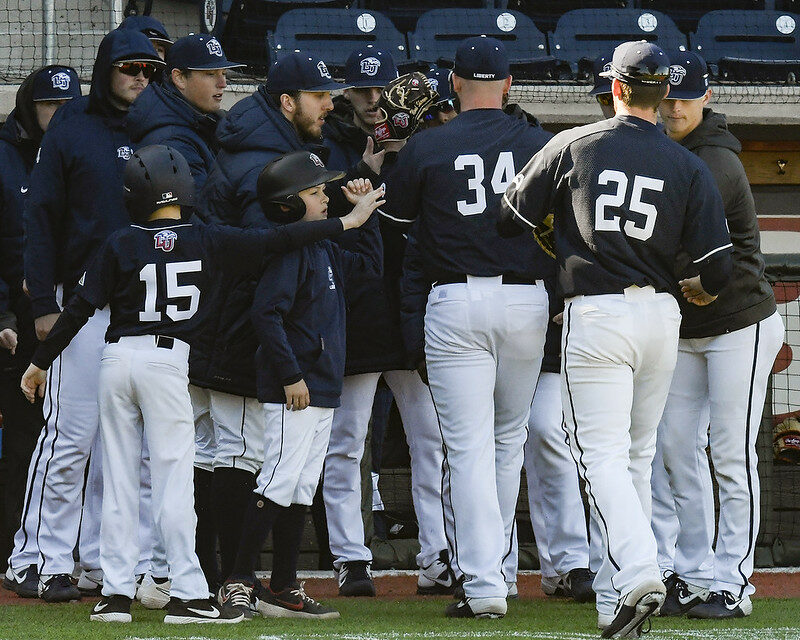 Liberty opened the 2021 baseball season this weekend with a three game series at Campbell, the preseason Big South favorite. The Flames picked up a win on Friday, but the bats were unable to get going all weekend as the Camels won Saturday and Sunday.

After being limited to just 12 at-bats last season due to a foot injury, second baseman Will Wagner blasted a 2-run, 2-out home run over the right field wall to extend Liberty’s lead to 4-1 in the top of the 7th inning. The Flames’ bullpen would deliver five innings of shutout work as Liberty opened the season with a win on the road.

Trevor DeLaite made his Liberty debut getting the start on the mound for the Flames after transferring in from Maine as a grad transfer. He allowed one run on three hits over four innings to go along with five strikeouts and one walk.

David Erickson and Fraser Ellard came on in relief and combined to allow only four base runners over the final five innings of play to close out the win. Erickson gave up one hit, striking out five and picked up the win. He got out of a jam in the bottom of the fifth inning as the Camels moved runners into scoring position at second and third with one out. The sophomore right-hander retired the next two batters to strand the runners and keep Liberty ahead, 2-1.

Ellard, a transfer from Lander University, earned a save in his first appearance as a Flame. He allowed two hits while striking out three without issuing a walk in the final three innings. DeLaite, Erickson, and Ellard combined to strikeout 13 Camels and walk only two.

Highly touted freshman pitcher Trey Gibson made his Liberty debut on Saturday, getting the ball to start the game as the Flames looked to clinch the series. It was an afternoon to forget for Gibson and Liberty. Gibson wasn’t able to get out of the 2nd inning, giving up 6 runs.

Mason Meyer scattered three hits over five and a third innings in the start for the Flames on Sunday, but it wasn’t enough as the Camels scored three runs in the 6th and 7th inning to come from behind for the win.

Brady Gulakowski had an RBI double in the 2nd inning that scored Cam Locklear to give Liberty the early 1-0 lead. Campbell would tie it in the 6th, but the Flames responded in the 7th with a Gray Betts singled that scored Brandon Rohrer.

The Camels got a hold of Mason Fluharty in the home half of the 7th, scoring two runs to take the lead, 3-2, in what would be the final margin. Fluharty got the loss as he surrendered three runs in just two thirds of an inning. Landon Riley pitched the final two innings without allowing a run.

PLAYER OF THE WEEK: CAM LOCKLEAR

The 5th year senior shortstop led the team in batting average, runs, RBIs, and walks in the three-game series. Locklear was 3 for 8 with 1 home run, 2 RBIs, and 2 runs scored to go along with his 4 walks. He was also perfect in the field with 3 assists.

PITCHER OF THE WEEK: DAVID ERICKSON

Erickson gets the narrow nod over Mason Meyer and Fraser Ellard as he picked up the Flames’ only win of the weekend. Erickson was able to work out of a jam in the 5th inning on Friday night. Campbell had runners on second and third with one out. He got himself and his team out of that pickle and was part of five scoreless innings of relief for the Liberty bullpen in Friday’s win.

This week, the Flames have their home opener on Wednesday at 4 p.m. against North Carolina A&T. The Aggies are 1-2 on the season after a three-game series at the College of Charleston this weekend, losing 1-0 on Saturday and in a double header Sunday, 14-2, before winning the final game of the series, 4-3.

Liberty also heads on the road for a three-game weekend series in Fort Worth, Texas against TCU. Friday’s first pitch is scheduled for 7:30 p.m. with Saturday’s game scheduled to begin at 3 p.m. and Sunday at 2 p.m. The Horned Frogs were picked to finish 2nd in the nine team Big 12 in the preseason poll. TCU began the season in Arlington, Texas playing in the State Farm College Baseball Showdown. The Horned Frogs lost to Ole Miss, 7-3, on Saturday and defeated Mississippi State Sunday, 3-2. They play Arkansas Monday evening and host Texas Southern on Tuesday. 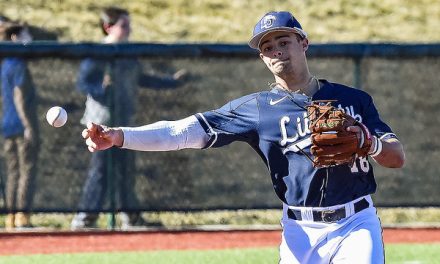