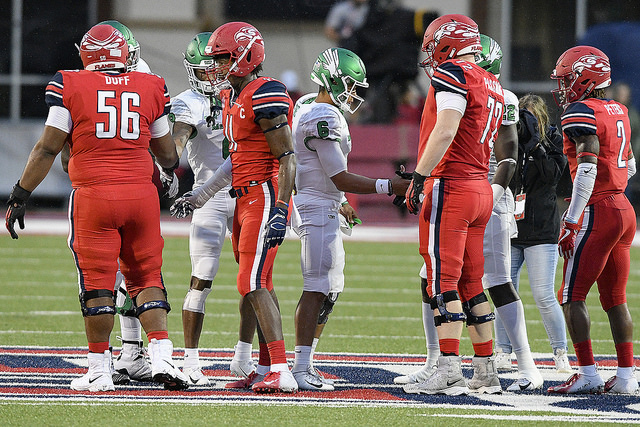 The Liberty Flames got blasted by the Mean Green of North Texas, 47-7, in weather delayed game to fall to 1-2 on the season.

Anyone who just looks at the final score would have assumed that the Mean Green dominated the game throughout. Certainly they were the better team from start to finish, but the Flames had their opportunities to make this a closely contested game. Much like the Army game a couple weeks ago, those opportunities were not capitalized upon, and the final margin was much larger than the disparity between the two teams.

But, let’s not fool ourselves, Liberty is not at the level of a North Texas. They are a complete team. UNT prides themselves on an uptempo, passing attack, but in the less than stellar weather conditions, they were able to go to the run game with success. They made no costly mistakes, their special teams were solid, and their defense came up strong when Liberty would cross midfield.

That was the worst punting performance I’ve probably ever witnessed. Not sure if it was because of the weather, but Liberty punter Aidan Alves punted 7 times 145 yards for an average of 20.7 yards per punt. 5 of the 7 punts went 26 yards or fewer including a 10 yarder and a negative 4 yard punt.

It certainly wasn’t Buckshot’s best performance. He finished the game completing only 16-of-39 passes. He missed on several open receivers, and he didn’t get a lot of help as there were several drops on the evening. The offense is starting to form a habit of moving the ball well between the 30s, but being able to get points on the board as they get into the opponent’s territory.

Liberty now heads to Albuquerque for the first of two straight trips to New Mexico. This week, the Flames will face the University of New Mexico for the 2-1 Lobos’ homecoming game. The Lobos have wins against Incarnate Word (62-30) and New Mexico State (42-25). They lost to Wisconsin, 45-14. New Mexico is coming off an open date this past Saturday.

The Lobos are led by 7th year head coach Bob Davie who has a 32-46 overall record at New Mexico. If you’re familiar with that name, Davie’s first head coaching stint was at Notre Dame from 1997-2001 where he replaced Lou Holtz. From 2001-2012, Davie was out of coaching as he was a college football analyst at ESPN.

UNM is currently ranked 107 according to ESPN’s FPI, where the Flames are 116. Liberty has a 23.7% chance to win the game according to this metrix.

Flames head coach Turner Gill on the Flames’ struggles in the punt game:

“We’re going to address it. We don’t use weather as an excuse. We’ve got to execute, got to execute better. Obviously, field position was poor on our part, didn’t even give us a chance as far as the field position aspect of it. A good offense like they are, it’s going to be very difficult to keep them out of the end zone.”

Buckshot on his interception at the goal line:

“RPO play, really that’s on me. We’ve been practicing it all week, I’ve got to put more touch on it so it can get over the linebacker’s heads. That’s what happened, he made a nice jump on the play. He made a nice play.”

Juwan Wells on the defense’s poor 2nd half:

“As a whole defense, we’ve got to step up to the plate. We can’t come out, even though we had a weather delay, we can’t come out in the 2nd half and be soft like that on the first drive.”

Jeremy Peters on the defense’s poor 2nd half:

“They just out executed us in the 2nd half. We had them. We were mixing up coverages and confusing the quarterback some, it was working. In the 2nd half, they came out running the ball. We’ve got to a better job tackling and running to the ball when we play.”

“Nothing is over. I have so much faith in this coaching staff and my teammates. I trust them with everything – New Mexico, Alabama, doesn’t matter.” 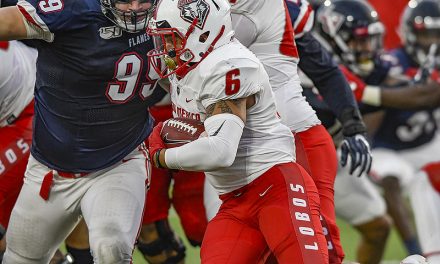 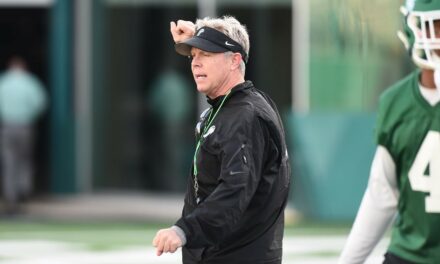