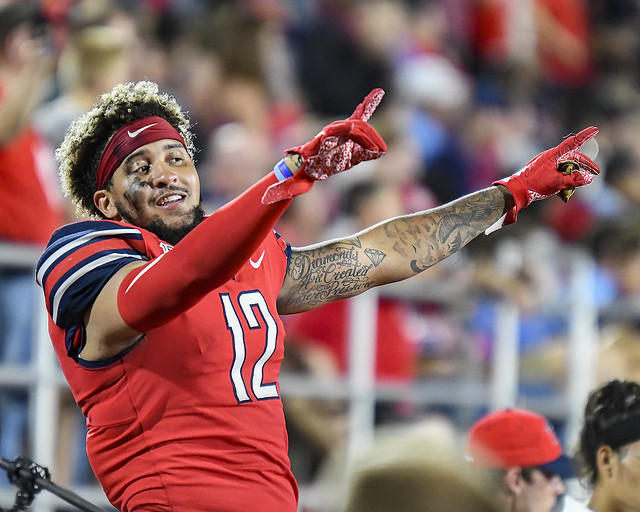 FLAMES MUCH BETTER WITH A HEALTHY TILLMON

Liberty linebacker Brandon Tillmon has been in and out of the lineup this season as he deals with a small fracture in his right foot. It’s an injury that first happened in fall camp, then was re-aggravated against Hampton, and “took off” in the New Mexico State game.

“On the interception, I don’t know what happened, but I got up and I couldn’t put any weight on it at all,” Tillmon said of his foot in the New Mexico State game. He injured it again somehow when he intercepted a pass.

The injury has caused him to miss three games this season and leave other games early. His absence was dearly missed in Liberty’s loss at Rutgers. Following the game, head coach Hugh Freeze said the linebacker play during that game was terrible. With Tillmon back in the lineup last week at UMass, the linebackers and defense as a whole fared much better.

“It’s our thinnest room if everybody is healthy,” Freeze said of the linebackers. “It’s just thin. Those two (Tillmon and Solomon Ajayi) are just more consistent over and over and over again than the others that we have. Their run fits were on point and it made a huge difference.”

Tillmon and the Flames are both hopeful he will be able to stay on the field the rest of the season. It really just comes down to pain tolerance.

“The adrenaline during the game pretty much takes it away from me,” Tillmon explained. “During the week, there are good days and bad days. Some days it’s hard to push off it on it. Other days it’s better. The coaching staff has done a good job of allowing me to do what I can, when I can.”

With Liberty leading UMass by a large margin in the 2nd half last week, it allowed the Flames to turn to some of the 2nd and 3rd stringers to get some quality game reps. One of those was 2nd string offensive tackle Cooper McCaw

“Cooper McCaw played a very good game, did very well,” senior right guard Dontae Duff said. “He’s done very good at getting his body prepared. Now, we feel confident if we get in a situation where we have to put a tackle in, put Cooper in and we don’t have anything to worry about.”

HENDERSON IS A NEW WEAPON

Redshirt-freshman running back Troy Henderson faced an uphill battle this season for playing time as he sat behind Frankie Hickson, Peytton Pickett, and Joshua Mack, all veteran backs. But he’s been patient and has finally found a niche for him to help the team.

Last week at UMass, Henderson took over for the injured Shedro Louis as a kick returner. He also was utilized in a new package where he caught a pass as he went in motion behind the line of scrimmage and took it in for a touchdown from five yards out.

“I was pleased with him,” Freeze said of Henderson’s performance at UMass. “I’m pleased with Troy. He’s coming on, (we’re) using him in some different ways.”

Henderson entered the program as a 3-star recruit out of Franklin, Tennessee. He had offers from Northwestern, Wake Forest, and others.

When we entered the season, it looked like the top of the quarterback depth chart was going to be very deep. Then, Auburn transfer Malik Willis had his waiver denied forcing him to sit out this season. That left true freshman Johnathan Bennett as Buckshot’s backup, until he got hurt on the sideline when celebrating with Brandon Robinson. With a ruptured patella tendon, Bennett is out for the season.

That left Robinson and Landon Brown as next up behind Calvert, and both have gotten some work late in games when the Flames had big leads. Robinson is also part of a short-yardage package that we’ve seen in a few games.

North Dakota State transfer Henry Van Dellen made the travel roster for the first time this season when he travelled with the team to UMass.

“If we get him in the game it’s either really good or really bad,” said Freeze of the redshirt-junior. “I’m not going to say I want him to be in the game. It’s really just he gave us the best chance if we needed a guy to throw it down the field to win a game, he’s probably the next best on our available roster right now. That’s why he travelled.” 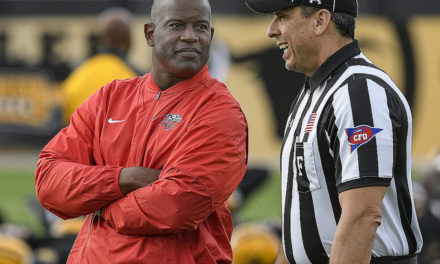 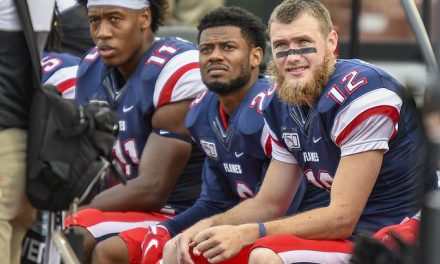 Calvert and Gandy-Golden have rewritten the Liberty record books