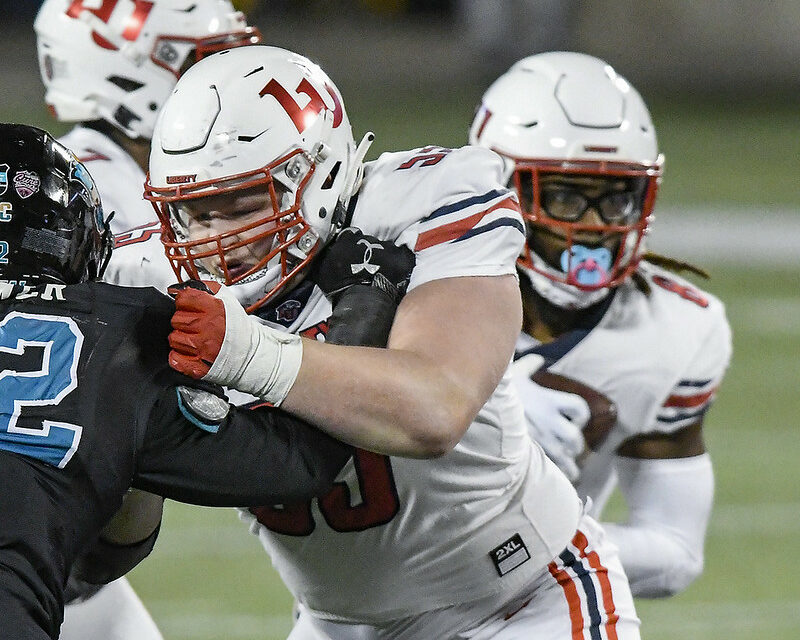 FEBRUARY SIGNING DAY WITH NO SIGNEES

As mentioned previously, the Flames did not sign a single recruit on the traditional February signing day, and this was the plan from the coaching staff. Football recruiting has been trending in this direction for several years now since the NCAA went with an early signing period in December. Last year, Liberty signed just one in February.

“It was definitely intentional,” Freeze said of not signing anyone last week. “We felt very good about the 19 that we signed in the December period. You combine that with the number of super seniors that are returning, and to us there was just great wisdom in holding the remaining six initials for several reasons. I like having some flexibility.”

With the NCAA not counting the 2020 football season against players’ eligibility, many teams are expected to have more than 85 scholarship players for the 2021 season. Freeze is currently planning on there being only one season the NCAA allows FBS teams to be over the typical 85 scholarship limit. So, Liberty must trim those extra scholarships by the 2022 season.

“Our plan moving forward is certainly to keep an eye on the transfer portal,” Freeze continued. “There are three positions that we would consider taking. I guess, I would never want to be put in a box, you always would take a great player, but certainly if you’re talking about just depth, we really feel really good about every place now, wouldn’t mind taking another corner, maybe another linebacker, and an outside receiver. So, if that happens, we have 3 and we would take 3 and carry them forward to the next year’s signing class.”

In early January, Liberty picked up a commitment from UTEP transfer corner Duron Lowe. He has now enrolled in school for this spring and is currently going through workouts with the Flames.

“Just loved his tape, loved talking to him on the phone, Face Time, his attitude, his approach, he’s mature,” Freeze said of Lowe. “It was a place that we needed some depth at corner. I think we definitely got better with him. Dom’s been impressed with the way he’s working in the weight room and conditioning. We’re excited about having him.”

In 2020, Lowe started the first 7 games at corner for UTEP where he finished with 19 tackles, 3 tackles for loss, 1 PBU, 1 forced fumble, and 1 fumble recovery. He also has excelled as a kick returner, finishing with 9 returns for 292 yards including a 100 yard return for a touchdown.

Hugh Freeze was recently interviewed for a radio show and was quoted as saying he wanted Liberty to eventually join a football conference. So, we asked him to further explain those comments and put them in context.

“I feel quite confident that if it was right for us, at the right time, to sit at a table and discuss joining a conference that our administration would certainly be open to sitting at the table and having that discussion,” he said. “That’s not something that I can control so I don’t worry about it, I just worry about making sure we are the best Independent football team we can be and competing with the schedule we’re given to get to bowl eligibility. So, that’s what my focus is.”

Freeze was also asked how frequently he and Liberty Athletic Director Ian McCaw discuss the Flames and conference affiliation.

“Ian and I do not talk about that a lot at all, but I have complete confidence and trust that if something is going on that is something we should look into, I feel very confident that Ian can handle that without me. If I need to be brought in to it, I’m sure he will. Again, I think we’re open to anything, but in the mean time my focus has to be on what is right in front of us and that is we’re an Independent football team and we’ve had good success in year 1 and 2 and I want that to continue. If that leads to us sitting at the table to join some conference that is beneficial to both parties then sure our administration would listen to that.”

ROOM FOR MALIK WILLIS TO GROW

Liberty quarterback Malik Willis had a record-breaking year in 2020, his first on the field for the Flames and first as a college starting quarterback. Willis was mentioned as a dark horse Heisman Trophy candidate midway through the season as he helped lead Liberty to its best season in school history. The Auburn transfer completed 64.2% of his passes for 2,260 yards, 20 touchdowns and 6 interceptions. He also led the team and all FBS quarterbacks with 944 rushing yards and an additional 14 touchdowns. Still, Liberty head coach Hugh Freeze says he has room for growth.

“He’s got a lot that he can improve on,” Freeze said. “We missed a lot of opportunities for quick throws in the RPO game that he just didn’t see. We’ve got to get to where we take those, what we call, gimme throws, access throws. Secondly, there were times, for whatever reason, his drop is incredibly short. He’s just not getting the depth, and our pass protections, we’re setting those protections, and those linemen believe based on the protection that we’re teaching, that on a normal three step drop from the shot gun that he’s going to be at 8 yards of depth at least. I’m not sure if he’s concerned about what’s going on in his mind down the field on a pass play, but he cannot sacrifice his drop and that got him in some trouble in many situations.”

The Flames’ spring practice schedule has been finalized. Liberty will begin spring practice March 1st, with practices every Monday, Wednesday, and Friday. The practices are scheduled to run throughout the month of March and into the first few days of April. On Saturday, March 27th, Liberty will attempt to hold a spring game depending on COVID protocols at that time. 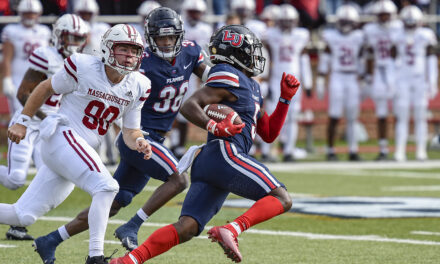 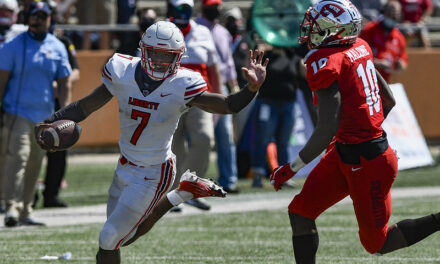 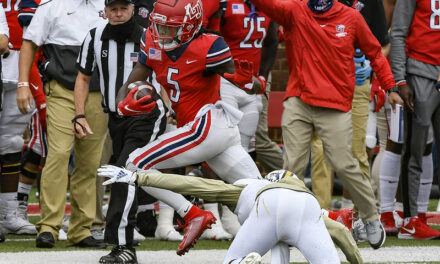