The number nine moment in our Year In Review belongs to Liberty Baseball, and their 5-3 upset of #6 North Carolina.  It was their second win of the 2012 season against a ranked opponent, after shutting out #18 Virginia earlier in the year. 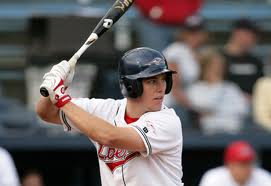 The Flames benefited from an early homer by Tyler Cox, and a late one by Trey Wimmer to bring home the big win.  Pitcher Jared Lyons got the win in relief for starter Brooks Roy.

Liberty baseball finished the season 41-19 overall, and got to the championship game of the Big South tournament before falling to Coastal Carolina 4-1.  The Flames’ 41 wins made 2012 one of the most successful regular seasons in Liberty’s history.

All eyes will now be on the future, and a new era for Liberty Baseball as they move into their new home in 2013.