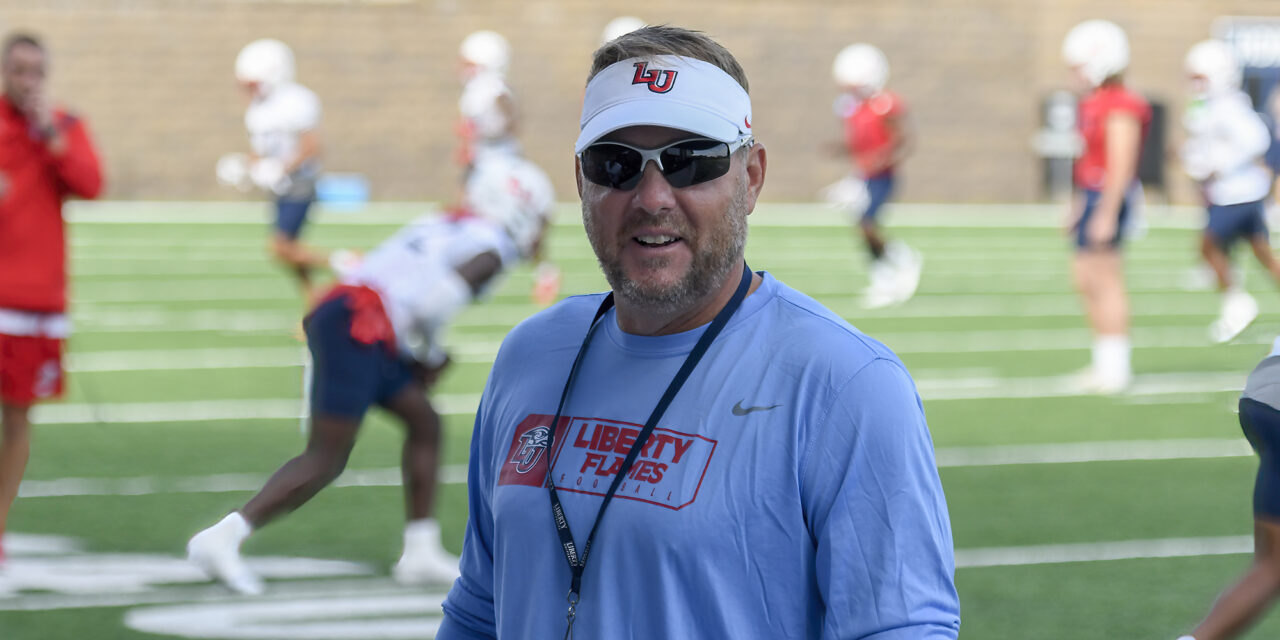 Liberty continues its training camp in preparation of the 2022 season which is fast approaching. They hit the practice field again on Monday morning, and following the session head coach Hugh Freeze held a press conference. Here’s everything Freeze had to say during his media session, beginning with his opening statement:

“We had our preseason game number one yesterday where we go through pretty much everything that will happen when it becomes real in about three weeks time. I don’t like any surprises for our kids or our coaches or anything. We try to go through that three different occasions before it’s real. We will do it again next Saturday.”

“Then, you turn to the scrimmage – defense dominated the scrimmage for the most part. Offense did have 283 yards rushing, but they were built around several explosive plays. So, if there was a negative for the defense it would be the explosive plays that they gave up, but offensively we had six penalties and really some MA’s that really killed drives. We were terrible on critical downs being third down, especially third and short and fourth down and short. So, we’ve got to work harder at that for sure.”

“Quarterback play was very inconsistent by all. So, kind of went into that preseason game number one feeling pretty certain maybe where we were headed, not quite as much right now, but I will say today was our best offensive practice in probably a couple years. Last night, I was really hard on them. We walked through every correction. Stayed up here late. I will say this about those guys, they want to be coached. They want to get it fixed. They want to get it right. They’re willing to put in the extra time and we did that last night. I thought today’s decision-making was excellent. We looked really sharp today.”

“We will go watch the film here in a minute and see if what I’m feeling is accurate. I thought there were some good things today. The energy, for after a game, I thought the energy was phenomenal, that may have something to do with the fact that I had it planned all along, we’re going to let them rest this afternoon. Then, we will grind through the rest of the week, through Saturday.”

WHAT IS YOUR THOUGHTS ON THE TALENT LEVEL OF THE DEFENSIVE BACKFIELD?

“We are definitely deeper than we’ve been. I love these young guys. Brylan continues to show up. A’Khori continues to show up. I think Rocket’s had his best offseason. He is playing really well. You knew what Quinton and Javon could do, and Jimmerson is playing a good role too. Freeman, the Indiana transfer’s also a good addition. We are definitely deeper. I would think it’s probably right that we are the most talented at that position that we’ve been. We’ve got to address getting out of some gaps up front. Is that a size issue? Do we need to be moving so much. Our linebackers are big and strong, but we did get some explosive runs yesterday.”

ARE YOU HAPPIER THAT YOU SAW THOSE EXPLOSIVE RUNS FROM THE RB CORE RATHER THAN AT QB?

HOW WAS TJ GREEN?

“Consistent, he’s probably not as explosive as both of those are once you get out into open field, but I”m glad we got him, he’s a really good back. I was really happy with Malik too, and he went down yesterday with an ankle. I don’t know how long that will be. He was doing some good things also.”

“I have no clue on that. I could care less who gets the most carries. I really don’t. I care who’s productive and who’s doing well in pass pro and pass receiving. Now, are there going to be a certain play here and there that this play needs to be for Shedro? Sure. Or this needs to be a play for Malik Caper. There will be some of those, but as far as going into a game thinking somebody’s got to get more carries than the other, right now I don’t feel that way.”

WHAT WAS THE PROCESS LIKE OF CJ YARBROUGH LEAVING THE TEAM AND THEN COMING BACK?

“Every case is different. I don’t want to be put in a box that every case would be treated that way, but CJ had a lot going on in his personal life with his family along with injuries. I think he’s a great teammate, a great leader, could be a great player, he’s got to prove he can go through a year and be healthy. We haven’t seen that. I hope and pray that’s the case because he would be an addition to our team that is going to improve us.”

WHAT HAVE YOU SEEN FROM HIM IN TRAINING CAMP?

“He’s been banged up. He went today and looked good. Hopefully he is well now and can get ready for the opener.”

WITH THE QB BATTLE, WHAT DOES THAT DO FOR YOU AS A COACH, HOW CHALLENGING IS THAT FOR YOU?

“I think the biggest challenge, we had an early staff meeting this morning to discuss some of these things. I think the biggest challenge is just when you make the decision, you don’t want to lose the others because you have a belief in them also. There are times that they look really good. Trying to keep everybody working toward the same goal of helping us produce a winning football team, even while you may not have your number called, which is very disappointing. I think that’s the biggest challenge that you have. This next week will be really critical leading up to maybe next Tuesday or so. We’ve got to get certain kids more reps before we really make the decision. Obviously, that will be somewhat telling to the individuals. We will have to manage those feelings and emotions.”

IDEALLY WHEN WOULD YOU LIKE TO ANNOUNCE THE STARTER?

HOW MUCH IS NAMING A STARTER BASED ON WHAT THEY ARE SHOWING INDIVIDUALLY, AND HOW MUCH OF IT IS BASED ON THE REST OF THE OFFENSE?

“It’s totally up to me about production and understanding and decision-making and then accuracy. Then, if everything is equal after that, it would come down to my gut feeling. We keep stats every practice. I can go pull the sheet that Jessie has that says here is his percentage in decision making being correct, his execution being correct, percentage of the average per game while he’s in there with the team. We’ve got numbers that tell a story. If your gut confirms that story that’s being told, that’s probably where you’re headed.”

WAS THE INCONSISTENCY DISAPPOINTING?

“It was very disappointing. One of the players were 30 for 30 in a practice last week in decision making and very high on the execution. The next day, he was like 27 of 29 decision making which is a high percentage. That means the ball is going to the right place, the right decisions are being made. Then, yesterday we had nobody, I don’t think, that was over like 80%. That was discouraging.”

“Decision making has to be 90% or greater for quarterbacks? Execution, is he talented enough to execute it? I don’t know. That changes from year to year. I’d love for it to be way up there too but every body is a little different. If you’re running zone read, that execution is probably more likely to happen if the decision was right by Kaidon Salter than it is somebody else. Still, the decision has to be right. Then, we’ve got a fighting chance after that.” 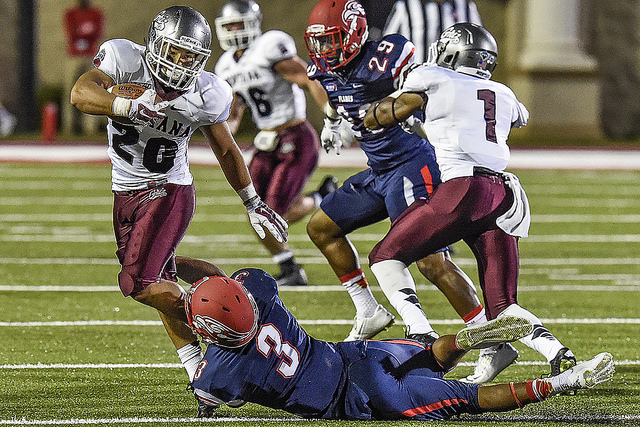 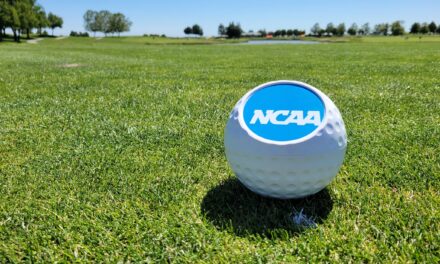 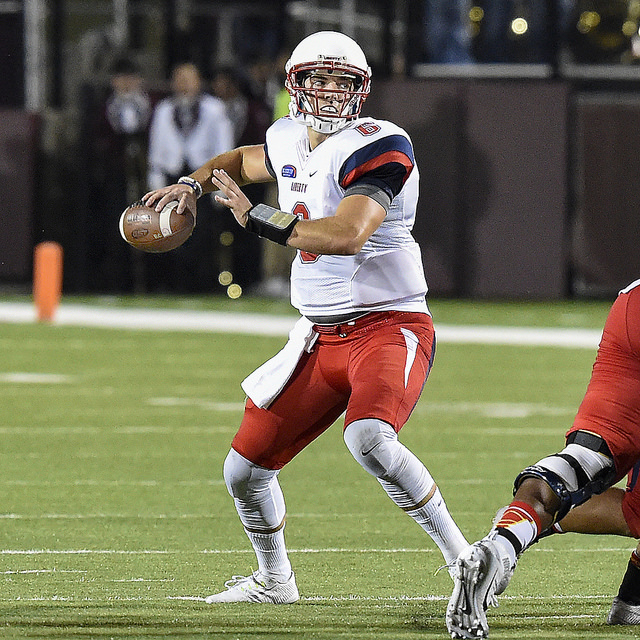