Liberty wrapped up its first big recruiting weekend as it narrows in on signing day 2017. The Flames picked up a total of 3 commitments this weekend, including the 5th commitment from Jayod Sanders as we mentioned on Saturday. Coach Gill and staff completed the weekend with commitments 6 and 7 from Tyler Murray and Elisha Mitchell.

Murray is a 6’2″, 180 pound defensive back from Jacksonville, Florida. He chose Liberty over offers from Troy, Elon, and Samford.

Mitchell is a 6’3″, 300 pound prospect from Virginia Beach where he attends Bayside High. He recently picked up an offer from Norfolk State. Mitchell plays both offensive and defensive line.

Murray and Mitchell were both on an official visit at Liberty this weekend. They were joined by Sanders and Aaron Pierre who committed to the Flames back in August.

The future keeps getting brighter! #DBU is being built! Another HUGE get from the state of Florida! 🔥🔥 #FlameGang17 🔥🔥

Homegrown beast from the state of VA joins the #FlameGang17! Thanks to the Beach for beefing up the trenches!#757 🌊➡️🔥

Liberty to face South Carolina in 2023 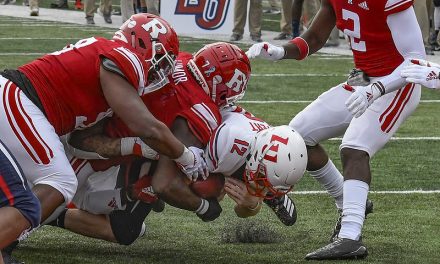