Flames To Watch During NFL Preseason For fans hungry to watch their favorite pro football team, the preseason begins Thursday night for most of the NFL. Currently, there are seven former Liberty players on NFL rosters, all fighting for a spot on the 53-man roster during the preseason.

Willis was drafted in the 3rd round of this past year’s draft by the Tennessee Titans, where he is competing in camp behind Ryan Tannehill and Logan Woodside. Tannehill is entrenched as the starter while Willis is competing with Woodside to earn the backup spot during the preseason, a job held by Woodside the past couple of seasons.

After going undrafted in 2020, Lemonier was quickly signed by the Los Angeles Chargers where he spent his rookie campaign going back and forth from their active to inactive roster. Lemonier played in six games in 2020, recording two tackles. He played in 7 games with two starts with the Detroit Lions last year, recording 15 tackles and 1.5 sacks.

Thomas was signed as an undrafted free agent by the Los Angeles Chargers following the 2022 draft. He will be looking to turn heads and grab the attention of his team executives during training camp and this preseason.

Shaa has turned heads at times during the preseason with the Chicago Bears as he fights to stick with an NFL team after being signed by Chicago as an undrafted free agent following the 2022 draft.

Benton was signed by the Tennessee Titans on August 9th. He spent his rookie year in 2020 with the Browns and went back and forth between the active roster and the practice squad much of the season. He was signed to a reserve/futures contract by the Browns in January 2021 before being waived by the franchise at the end of the preseason. He spent time on the practice squad for the Patriots, Seahawks, and Jets in 2021. 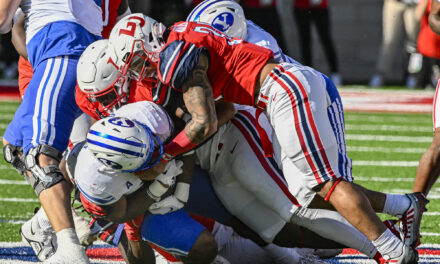