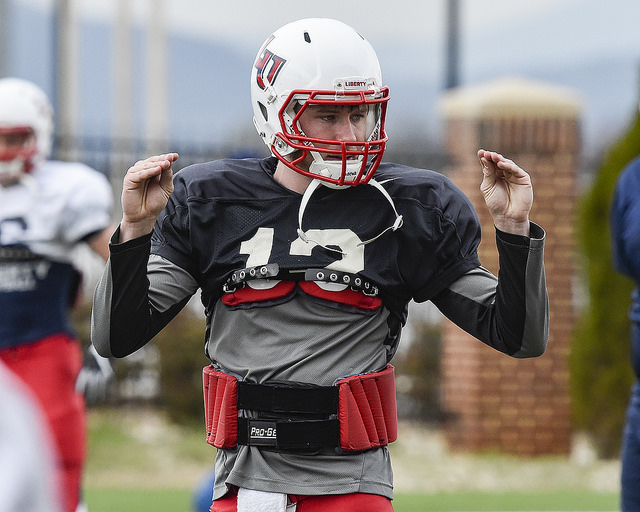 It’s early in the morning, most of campus is still in bed or at breakfast. But not Buckshot Calvert. He’s in the Football Operations Center at Williams Stadium, watching film. Dissecting this week’s opponent, looking for the smallest tendencies.

Helping to lead the Flames to its first 3-0 start since 2008, sophomore quarterback Stephen Calvert, or as we have come to know him as Buckshot, has taken his game to another level. Through the first 3 ball games, Calvert is 87-of-123 passing for 1,107 yards, 12 touchdowns, and 1 interception. Those numbers put him first in touchdowns and 2nd in passing yards and total offense among FCS quarterbacks. He’s also on pace to obliterate all single-season school passing records.

Ask any of his teammates or members of the coaching staff, and they will tell you that he has put in tremendous work since he stepped foot on campus prior to the 2016 season, and the fruits of his labor are beginning to show. Ask anybody who has known Buckshot prior to his Liberty days, and they will tell you it has been his strong work ethic since he was a little boy that has helped him get to the level he is at today. 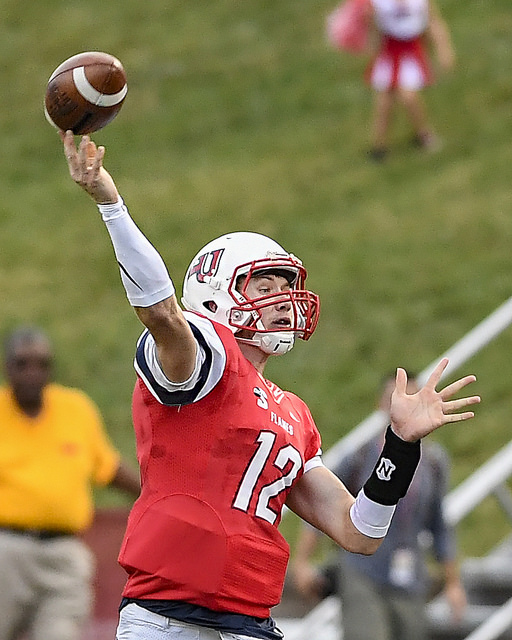 “(Playing at this level has) always been a dream,” Buckshot said. “My dad worked me so hard. He would take me out to the field an hour before practice started just to work with me.”

Buckshot started playing tackle football when he was 8 years old. On his first team, he played tight end and was the backup quarterback. From there, he worked at perfecting his craft as a quarterback while also being a pitcher on the baseball diamond.

“I bought a box of hula hoops online,” Buckshot’s dad Steve Calvert said. “They were all different colors, bought like 100 hula hoops. I made stands out of PVC, and I cut the hula hoops to different sizes. We had a big oak tree in the front yard, and I would hang some from the oak tree. Then, I would have some on poles further down. I made some PVC stands where he could get the ball, take his 3 step drop, and I would just call a color, and he would throw the ball through the hoops.”

Buckshot and his dad did this routine every day from the time he was 8 until age 12. “He got so good at that, and he was just hitting every single one.”

His dad reminisced of a trip they took to Wildwood, New Jersey when Buckshot was about 12 or 13 years old. They ran into a street vendor who had a game that challenged kids to throw a football through a small tire. If you could make 2 out of 3, you would win a large stuffed animal. Buckshot and his dad walked up to the vendor, and dropped the $5 on the game. Buckshot then promptly threw all 3 footballs through the tire.

“The guy goes, ‘I bet you can’t do that again,'” Steve Calvert said. He then put another $5 bill down as Buck drilled 3 more throws. 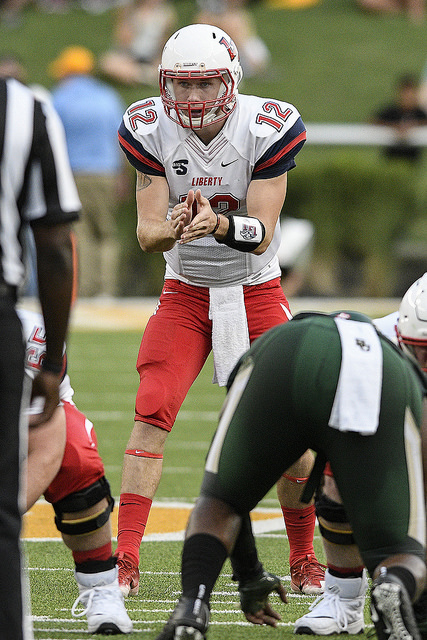 “Now people are gathering around, watching this 12 year old kid throw a football through a hole this big 9 times in a row. I said Buck, back up another 5 yards. He won like 7 stuffed animals. I was giving them away! The next day we went out, and (the street vendor) said, ‘your son made me so much money because all the other parents thought, oh we could do this if this little kid can.’ I told the guy, remember this name Buckshot.”

“I can’t even play catch with him anymore,” Buckshot’s dad said jokingly. “I used to go out every single day, 365, we played ball every day. There was no in between unless the kid asked for a day off. He might say, ‘dad, do you mind if I take the day off.’ Yeah, no problem, you deserve it. But he never really asked for it, it would be like once every 6 months.”

When high school rolled around, Buckshot was recruited to play football at Chaminade-Madonna College Prep School. He began his high school career as a backup to Sean White, who ended up at Auburn. Things didn’t go as expected during his 10th grade year, as he suffered a knee injury which caused him to miss his whole sophomore season. There was also a coaching change made, as the coach that recruited Buckshot to Chaminade resigned. The new coach brought in his son and started him ahead of Buckshot. The Calverts realized it was time to move on.

Steve Calvert also knew it was time for him to let others train Buckshot. “I taught Buckshot to a certain age. Then, it got to a point where he knew more than me. That was the point where I said look, here’s where you need to go and have somebody else coach you because I’ve taught you everything that I can possibly teach you. These guys are going to know a lot more than what I know.” 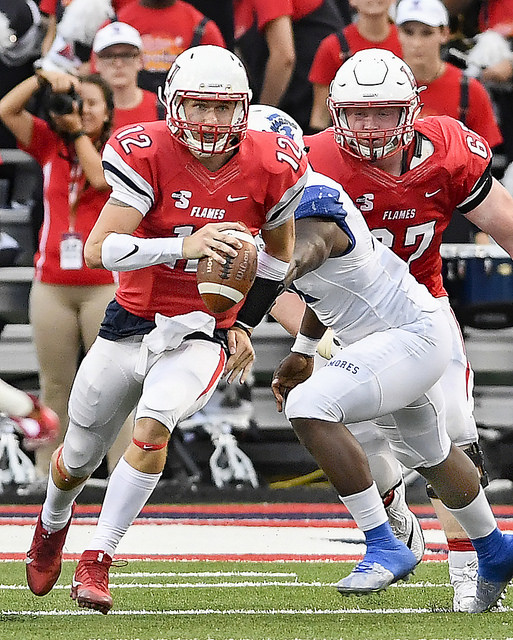 Calvert and the Flames are at #5 Jacksonville State Saturday

One of the professionals they turned to was quarterback coach Ken Mastrole and the Mastrole Quarterback Academy. After a college career at Maryland and a short professional career, Mastrole turned his knowledge of the game into a first-class quarterback school where he has worked with numerous NFL and college quarterbacks including Teddy Bridgewater, EJ Manuel, Mike White, Rakeem Cato, Kurt Benkert, Jerod Evans, and countless others.

“All the people I’ve been around my life, coaching me,” Buckshot says of some of his mentors, “I had some great quarterback coaches who really stuck by me and mentored me to become the person who I am today.”

To help get noticed by college coaches, Buckshot played 7-on-7 football in the offseason. His team won the 7-on-7 national championship two years in a row. “Buck got a lot of exposure from that,” his dad said. “We travelled everywhere. He got a lot of recognition from there. He set all kinds of records. Teams from South Florida, California, Texas, Georgia, we blew them out. Our team was that good, everybody on the team is playing college football somewhere.”

When it came time for recruiting, he had several options of where to go for college, but his dad wanted to make sure he had an opportunity to play immediately. “My whole objective (with recruiting) was getting him on the field,” Steve Calvert said. “I knew he was that good. I knew he was that good since he played rec ball. I really knew it. He was that accurate.”

According to Buckshot’s dad, he had offers from Florida Atlantic, Florida International, Cincinnati, and Rutgers. Several other schools showed interest including Western Kentucky, Miami (OH), and Temple. Cincinnati was high on the list, but there were 7 quarterbacks already on the roster.

“I’m looking at Coach (Tommy) Tuberville (of Cincinnati),” Steve Calvert explained, “and was like where is Buckshot going to fit in?” 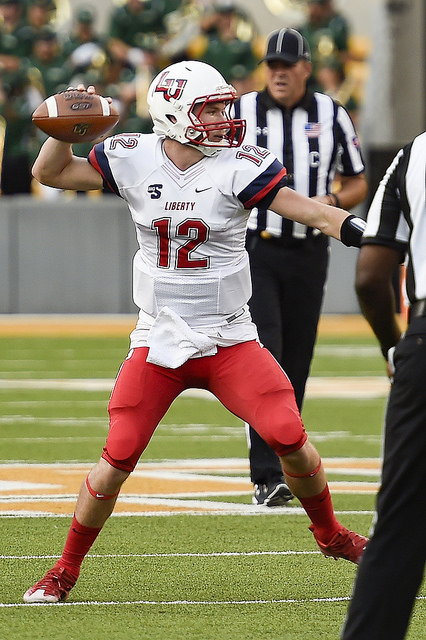 Buckshot opened the season with 118 pass attempts without an interception

The Bearcats’ coach planned on redshirting Buckshot his first season and then he could compete with 3 other quarterbacks for the position. Calvert decided Cincinnati wasn’t the place for him. Meanwhile, Tuberville is out of a job.

Buckshot came to Liberty’s camp prior to his senior year of high school, and he immediately grabbed the coaching staff’s attention.

“When he came to our camp, we saw him throw the football, and I think he probably saw all of us ooh and ahh about the way he was spinning the football,” Coach Gill said. “There was a genuine interest that we had in him. We told him it wasn’t a guarantee that he was going to start (as a true freshman). We just told him that he was going to have a great opportunity to compete for a job, and then we’ll see what happens after that. I think that was a big help.”

“Coach Gill was the only coach that said we are going to give him a true opportunity, as a freshman, to start,” Buckshot’s dad said. “Not one other coach could say that.”

In July 2015, Buckshot committed to Coach Gill and Liberty, and he has been turning heads ever since. He got playing time in all 11 games his true freshman season in 2016, including the season opener at Virginia Tech. By the 5th game, he was named the starter.

“It’s been a long journey,” Steve Calvert said. “I’m very proud. I brag, brag, brag to everyone, all my friends and everyone.”

Buckshot’s play on the field is causing Liberty fans everywhere to brag to everyone they know, as well. 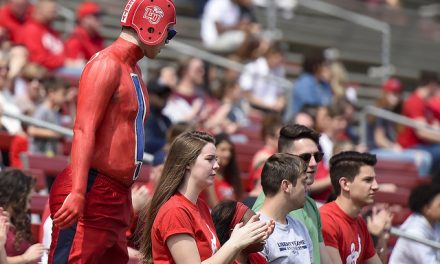