ASUN “juggernaut” only thing standing in the Flames’ way 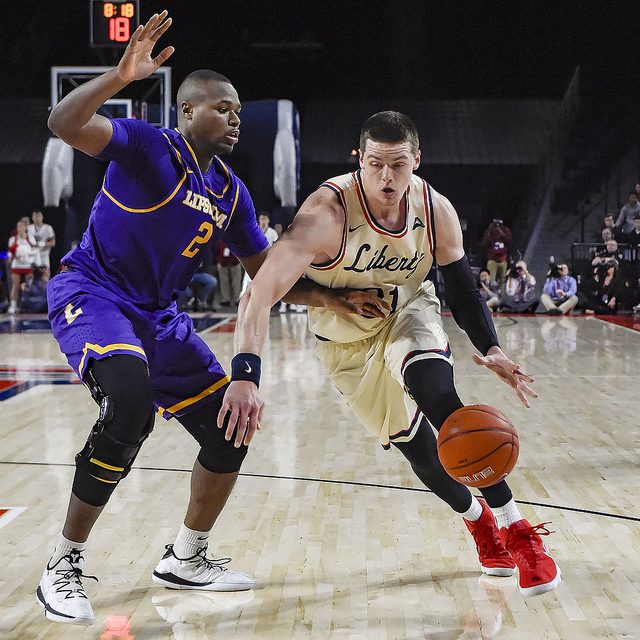 Liberty vs Lipscomb Round 2. Wednesday at 7 pm from Allen Arena in Nashville.

Despite the way the first game went, this game still has all the makings of a heavyweight bout. Two twenty-win teams, separated by just 1 game in the conference standings, with a combined record of 20-0 against all other conference teams. The Flames (21-5, 10-1) and the Bisons (20-4, 11-0) allow the ASUN to be 1 of just 8 leagues in the country with multiple 20-win teams.

But there is the reminder of that first game in all of our minds. The final margin was 20, but it was much worse than that. The Bisons led by as many as 33 and the game was really never in question. Was it a fluke or are they just that much better than the Flames?

“If you’ve watched us play and you watched the Lipscomb game and that’s your reference point, then you’re thinking, ‘Man, you’ve got a long way to go,'” Coach McKay said of the distance between the Flames and Bisons.

More than just the two team’s first matchup, it’s what Lipscomb has been doing for the better part of two conference seasons now. They won 8 straight ASUN games, including three in the conference tournament, to end the 2018 season. That run has only picked up steam as Casey Alexander’s team has now won 19 straight league games. Only 3 of their 11 ASUN games this season have been decided by single digits. Lipscomb’s streak of 19 straight conference wins is the 2nd longest active streak in the country as only Gonzaga has won more. The Bisons are 23-1 in their last 24 ASUN games. 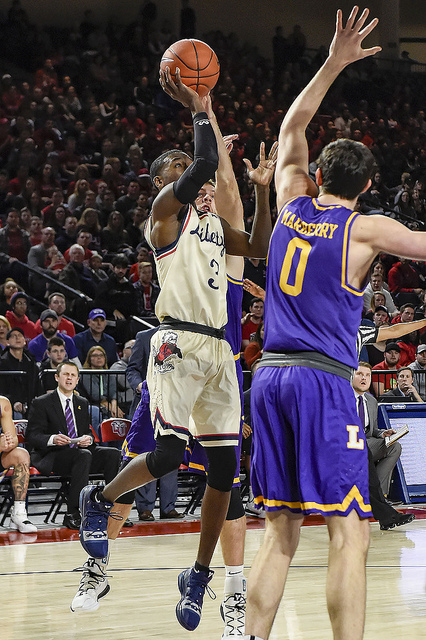 “There’s a reason why they’ve won 19 in a row,” McKay said. “They have really good players, Casey has done a great job. He and his staff, they’ve recruited well, they develop them, they have a good team.”

“(Lipscomb) is a team that, for mid-major basketball, is as good as any I’ve seen in my (28) years of coaching in Division I,” said McKay. “They are balanced on both sides of the ball offensively and defensively. They have two players, in particular, that are first-team preseason all-conference players and, definitely, will be postseason all-conference players in Garrison Mathews and Rob Marberry.”

There are bracket projections that have the Bisons as high as a 7-seed and many in the 8-10 range. The Bisons are currently in the others receiving votes category in the AP top 25 poll. They reached as high as 26 in KenPom and are currently ranked 30th in the NCAA’s NET rankings.

“They are the juggernaut that continues to be the talk of the country at the mid-major level,” McKay said. “We realize that is ahead of us.”

Mathews and Marberry proved too much for the Flames in the first meeting, as the talented and experienced senior duo combined to score 36 points on 14-of-24 shooting from the field. Senior Eli Pepper provides a viable 3rd option for Coach Alexander. The talented big man scored 27 points on just 7 field goal attempts while grabbing 14 rebounds and dishing out 6 assists on Saturday against Jacksonville.

But are they unbeatable?

The Flames played its worst game of the season in the first matchup. Some of that is partly due to Lipscomb, but it’s also likely Liberty will play better than they did in the first game. In the first meeting, the Flames had season lows in field goal and 3-point percentage and assists. Scottie James, Darius McGhee, Georgie Pacheco-Ortiz, and Keenan Gumbs all produced below their season averages in field goal percentage and points. Caleb Homesley was just 5-of-16 from the field. Lovell Cabbil was only 2-of-7. Only Elijah Cuffee and Myo Baxter-Bell performed above their season averages.

Will all of that happen again Wednesday night? The odds say no.

“We did not play as competitively as I would have liked,” McKay said of the loss against Lipscomb in late January. “Lipscomb is very good on both ends of the floor, but I thought we helped them by turning the ball over and (missing) our first eleven 3-point shots. That gave them a lot of confidence. They are a group that has some success in their bank, so when they saw a crowd of 5,000+ and another undefeated team, they were ready. I hope we have that same mindset in Nashville Wednesday.” 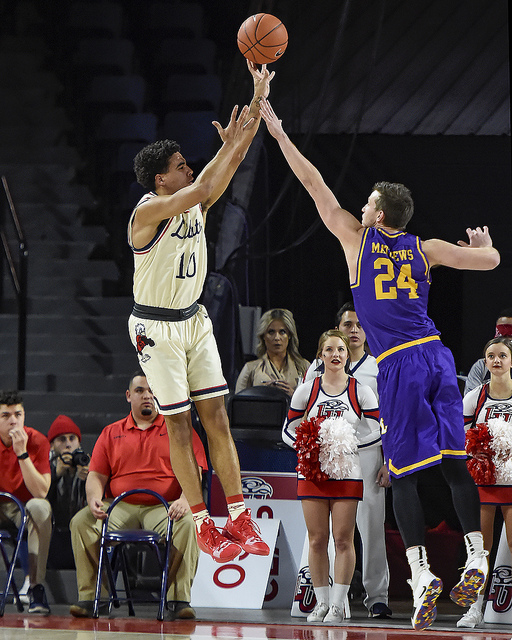 In the first meeting, the Flames had 9 first half turnovers and didn’t connect on a 3-pointer until the 11:51 mark of the 2nd half when the game was already being controlled by the Bisons. Elijah Cuffee, who was the team’s most efficient player on offense and drew the assignment of trying to contain Mathews, picked up his 2nd foul less than 3 minutes into the game and only played 4 first half minutes. Despite playing fairly even in the 2nd half, only losing the final 20 minutes by 2 points, the Flames were already down by 18 at the halftime break. That’s something that can’t happen again if Liberty wants to beat a team as good as Lipscomb.

If Liberty wants to continue to challenge for just its 3rd ever regular season conference title, the Flames must win in Nashville Wednesday. A loss would give Lipscomb the tie-breaker and a 2 game lead with just 4 games to play. It’s hard to imagine Lipscomb losing 1 game much less 3 out of 4. Also, remember that the higher-seeded team hosts each round of the ASUN tournament. So, if both LUs reach the championship game, it will be played at whoever wins the #1 seed.

“We want to be challenged,” said McKay. “We’re excited about where we are and the potential of, hopefully, where we’re going. They’re a tough out, they’re a hard equation to solve. I like our team. I’ve seen a difference in our belief when we go on the road. I think our guys will walk in there prepared (Wednesday night).” 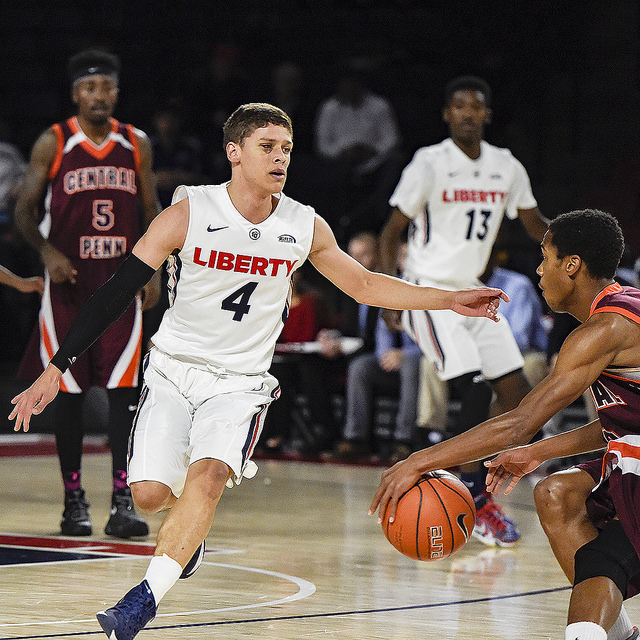 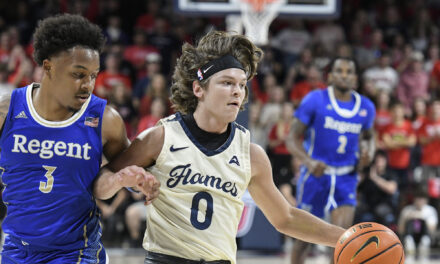 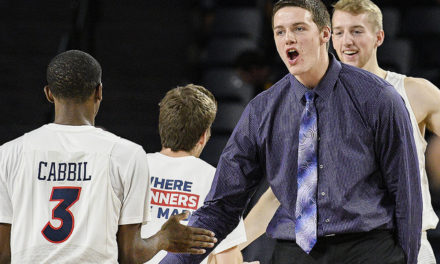